POSTNOTE, May 13, 2015: Three Links about WWII I find especially interesting:
America at War (also referenced below): America at War001;
plus two items found at my ancestral North Dakota farm:
1942 War Atlas edited by H. V. Kaltenborn: 1942 War Atlas002;
and
an anti-America-into-War appeal circa 1940-41 from “left-wing” Democrat Montana Senator Burton K. Wheeler: WWII anti-war position001 Gerald P. Nye, quoted, was conservative Republican North Dakota U.S. Senator. The others quoted on the “postal”, Herbert Hoover, Amb. Joseph P. Kennedy, and Col Charles Lindbergh, are well known and speak for themselves.
*
A week from today, 70 years ago, April 30, 1945, Adolf Hitler took his own life in Berlin. About a week later, May 8, 1945, Germany surrendered, and the Third Reich became an object lesson of history for all of us.
On the day Hitler died, Anneliese Solch*, then 18, was with her family at home in Bavaria, about the same distance from Berlin, as St. Paul is from Fargo.
The question becomes: what have we learned, from war, after war, after war?
(click to enlarge) 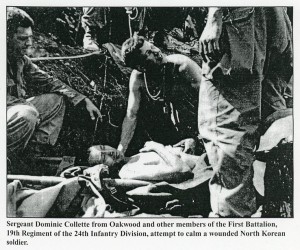 April 17 I stopped in at the State Historical Society of North Dakota (a marvelous museum and archive), and touched base with long-time friend and archivist Jim Davis.
We connect through my work on family history, and conversation got around to my grandmother’s French-Canadian side from Oakwood (near Grafton, ND).
Jim was recalling a long commentary he’d written for the 2009-2011 North Dakota State Government “Blue Book”, remembering one of his interview subjects, Dominic Collette from Oakwood, ND, doubtless a relative of mine.
Dominic’s story about service in the Korean War is gripping, and Jim used his recollections, and asked him for a period photo.
Dominic said, (my paraphrase) “the only photo I have of me is this one: I’m the shoes that you see at the top of the photo”. That’s the above photo which Jim used with his article, part of which appears here**: Korea & Sp Amer Wars001
What mesmerizes me about the photo is not Dominic’s shoes, but the center of the photo, the victim of war, who he is, and who are trying to save his life: a North Korean, & GIs. Enemies, but friends; victims of a deadly struggle, trying to kill, then save, each other. That is war as most combatants see it…us, not us against them.
Back home in the mailbox was the May, 2015 issue of the American Legion magazine***, which calls itself “The magazine for a strong America”. I’m a longtime member of the American Legion.
This particular issue included a long article, “America At War: 1775 – Present”, and I found it particularly interesting. The entire article is here: America at War001 One half of page 32 pictures the death of Dominic Collette’s cousin, and my Uncle, Frank Peter Bernard**** of Grafton ND, on the USS Arizona at Pearl Harbor, December 7, 1941.
And so it goes.
In the two articles referenced above, there is great room for reflection, discussion and, yes, debate.
I took some time with the America at War article, noting what was included as relevant data, and the immense amount of relevant data that was left out…. War is far more than a carefully selected photograph and a few facts, after all.
The only U.S. Presidents after 1941 without a war on their watch were President John F. Kennedy, and President Jimmy Carter. Of course, this fact can be buried – global tensions will always exist, but do not equate to “War” as the only sure option; there are alternatives, like negotiations.
In the article, the entire period from 1947-1991 is labeled as the “Cold War”. Still, from 1961-63, and again from 1977-81, with near misses (including the Cuban Missile Crisis when I was in the U.S. Army), it was possible to stay away from war. Cooler heads prevailed. And therein should be some lessons for us all.
The only time period since 1941 identified in the Legion magazine article as being without war in the United States was 1946. That was immediately after World War II ended (September, 1945), and the United Nations was founded (October, 1945).
Of course there are people, still, who are terrified of the very idea of nations united for some reason or other; but now more than ever the notion of a United Nations of countries working together is essential to global survival.
Let’s talk.
* – As for Anneliese Solch (now Annelee Woodstrom), she will be reflecting on growing up in Adolf Hitler’s Germany on Friday May 1 in Minneapolis. This is a reservation only dinner, with space still available. More information here: World Law Day May 1 2015
** – In the same article was a segment about the Spanish-American War, in which my grandfather Bernard served in 1898-99 in the Philippines. That segment is also included here. North Dakota lost 17 or 18 men in that war; four of them were from Grandpa’s Company C, out of Grafton.
*** – I’ve been a member of the Legion since the mid 1990s. While I’m a veteran, and I don’t have to belong to the Legion, and I certainly would not be in league with its general philosophy, I’m now a long-time member and will probably continue being so.
**** – In the visit to the North Dakota Interpretive Center I found a monument to all of North Dakota’s war dead, in all wars. At such places, I always look for my Uncle Frank’s name, and there it was:
VIGNETTE 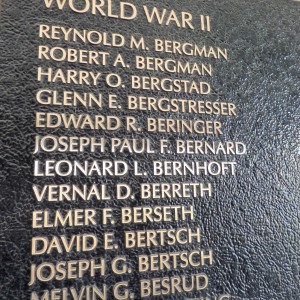 “Joseph Paul F. Bernard”?
I’d never heard him described as other than Frank Peter, or “Pete” or “petey” or just Frank. And the first boy born in our family after Franks death was named Frank Peter Bernard, in memory Dad’s younger brother.
Jim Davis looked it up on the archival record. Indeed: Joseph Paul F. Bernard is what it showed, with all other data consistent with my Uncle. I sent Jim a small collection of documents, including Grandma’s own inscriptions about her sons birth and death in her Bible. You can read it here: Bernard, Frank, b & d001
As one can see by the documents, there is some rationale for “Paul”, but “Joseph”? As I told Jim, all I could surmise is that Joseph might have been Frank’s Confirmation name – a common occurrence in Catholic families. And Frank’s Uncle, down the street in Grafton, was Joseph Bernard.
But all of that remains speculation, and the notation on the monument will not be changed.
https://thoughtstowardsabetterworld.org/wp-content/uploads/2022/04/thoughts-300x138-1.jpg 0 0 dickbernard https://thoughtstowardsabetterworld.org/wp-content/uploads/2022/04/thoughts-300x138-1.jpg dickbernard2015-04-23 12:30:342015-04-23 12:30:34#1019 – Dick Bernard: War is Hell; How About Waging Peace?
0 replies