Today is the 45th Earth Day though, apparently, there are variations.
Take some time to notice and support Earth Day efforts in your community. Chances are that something will be going on, at the grass roots, which is where all the effective action seems to take place. As Margaret Mead observed years ago: “Never doubt that a small group of thoughtful, committed citizens can change the world, indeed it is the only thing that ever has.”
My first reminder of Earth Day this year came from the church newsletter at Basilica of St. Mary last Sunday. Staff member Janice Andersen, a lady who walks the talk, always, wrote a front page column for the thousands of folks who will read the page. It is here: Janice Andersen Apr 2015001 You will note that the entire focus is on care of the environment through formally supported programs through a church community.
Such initiatives as Janice describes so well do not drop out of the sky, magically appearing fully developed. This one has been evolving, literally, over a period of years, in stages.
I wasn’t involved, except tangentially, and without knowing….
January 16, 2014, 15 months ago, I was at a meeting at St. Joan of Arc Church in Minneapolis, and Dennis Dillon, a friend from Basilica, asked me if I would take the below photo:
(click to enlarge) 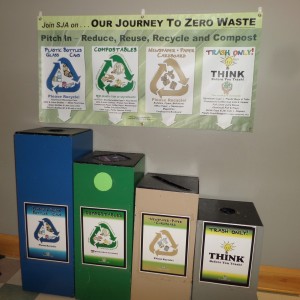 A committee was forming on Eco-Stewardship at Basilica and a small group of committed parishioners, including Dennis, were taking on the task.
A chair, Donna Krisch, a public school teacher by day, came forward to help lead the meetings and discussions which lead individuals to cooperate in any successful action.
Every now and then I run into Donna, and Dennis – the two committee members I know – and a key development came some months back when the committee decided to apply for a small grant through the City of Minneapolis (or maybe it was Hennepin County).
Such grant applications are no cake walk: money is not granted based on one’s representations. Such a grant is a contract to do something specific, and is detailed.
The Committee jumped through the necessary hoops, got the contract, signed it (somewhat nervously), and here they are, on Earth Day, at the beginning of their bold initiative for our Parish Community.
I have no doubt whatever that they will succeed.
In my mind, they perfectly fit Margaret Mead’s observation. Because of this “small group of thoughtful, committed citizens” (parishioners), thousands more of us will be exposed to a simple idea by which we “can change the world”.
It will be interesting to watch the project as it evolves.
Wherever you happen to be, today and every day, become part of the solution.
POSTNOTE: There are plenty of legitimate worries about the world we all are leaving behind, but sometimes a look back gives some useful perspective.
At a meeting last year, some of us were recalling the campaign to move smoking out of public spaces in this country.
It started small, seeking set aside of a few hotel rooms as “non-smoking” in hotels, and like actions.
Fast forward to today in America. People still smoke, but not nearly as many, and tell me where they find smoking rooms in hotels these days.
Working together works….
Donna sent around an announcement of an event today in which you might be interested, especially if in the area of Hennepin County. You can see it here.
https://thoughtstowardsabetterworld.org/wp-content/uploads/2022/04/thoughts-300x138-1.jpg 0 0 dickbernard https://thoughtstowardsabetterworld.org/wp-content/uploads/2022/04/thoughts-300x138-1.jpg dickbernard2015-04-22 00:25:452015-04-22 00:25:45#1018 – Dick Bernard: Earth Day 2015
0 replies