For a few hours last Friday I reacquainted with about 130 miles of North Dakota’s I-94, between Mandan and Valley City ND. Thanks for the unexpected trip, and the opportunity to reminisce, go to my Uncle Vince.
Vincent, who died on February 2, was a long-time member of the Catholic Fraternal organization, the Knights of Columbus, as was his Dad, my Grandpa. Grandpa joined about 1921, and Vincent in 1947.
As part of the annual North Dakota Knights of Columbus gathering, this year in Mandan ND on April 17, about 150 KCs who’d died in the past year were recognized by a reading of their names and procession of candles, one dedicated to each departed Knight.
I was invited as a member of Vincent’s family, and attending was the least I could do.
It was a very impressive event (portion of program here: KCs Mandan 4-17-15001. Listed (p. 4) and somewhere among the candles (below) was Vincent Busch. A retired and prominent Catholic Cardinal, Theodore McCarrick (p. 5), was celebrant.
Knowing Vincent as I do, he’d probably be embarrassed and said, “what did I ever do to deserve this?”
Well, of course, he deserved the recognition, and the others as well.
We all deserve to be remembered.
(click to enlarge all photos) 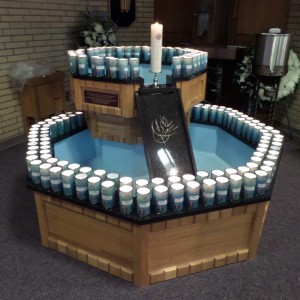 To get to and from Mandan I drove a portion of I-94 I have rarely driven in the past 50 years. 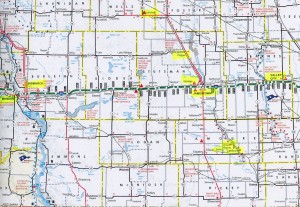 Thursday, I started from LaMoure, where I’d had a very busy couple of days. Though only 60 miles to “Jimtown” (Jamestown, in Grandpa’s rendering), I arrived pretty well exhausted and “motelled” there. I wanted a beard trim, and learned from the clerk that the J.C. Penney store across from the motel had a walk-in Beauty Salon. Sure enough. A pleasant lady trimmed my beard.
“How much?”
“No charge”.
It was one of those unexpected kindnesses that you relish when they occur, and you don’t forget. It becomes an invitation to pay it forward, to someone else….
Next morning, enroute west, I stopped in at nearby Eldridge, my home from 1943-45. Elridge is a main-line railroad town on what used to be called the NP (Northern Pacific) Railroad. I photo’ed the first place we lived there (upper floor, north side); and the school in which my Dad was Principal, both still full of memories. I visited both with Dad back in the 1990s. Then, the school was occupied by a lady and her daughter. Today the place is empty, like most of those tiny town schools, mostly brick, which have managed to survive, though empty. 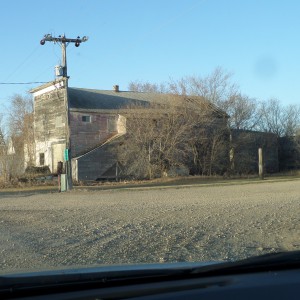 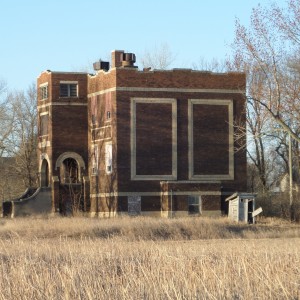 Enroute again, the map reacquainted me with places from my past, especially college days at Valley City State Teachers College. Many classmates I knew, then, were from places like Tappen, Napoleon, Streeter…. I graduated from high school in 1958 at Sykeston; another place we lived in 1942-43 was Pingree. These towns were tiny, but mostly much larger than they are now.
In Bismarck, of course, I visited the State Capitol. The “Prairie Skyscraper”, built to replace the old capitol which burned down Dec. 28, 1930, was always a place of pride for we NoDaks.
This was a bustling place this day: the state legislature was in session. I was there about lunch time, and Senators and Representatives were among those catching lunch. A group, DigitalHorizonsOnline, was testing our knowledge on North Dakota Trivia. Do visit their site.
On the Capitol Grounds is an immensively impressive and newly enlarged State History Museum and Interpretative Center. I highly recommend it. It matches any such facility I’ve seen anywhere. 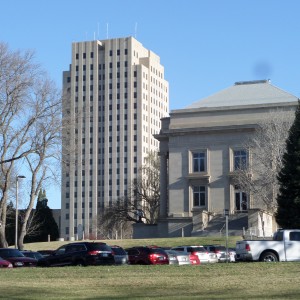 Of course, no trip to the Capitol is complete without a trip to the top, to take a picture (below). On the ground level are about 43 winners of the North Dakota Roughrider Award. There are perhaps 43 portraits now, among them my early childhood friend from Sykeston, Larry Woiwode, who is directly across from the portrait of the old Roughrider himself, President Teddy Roosevelt. 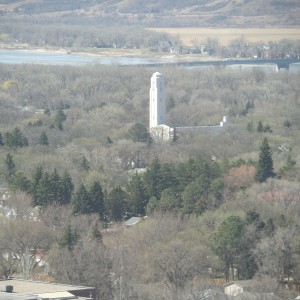 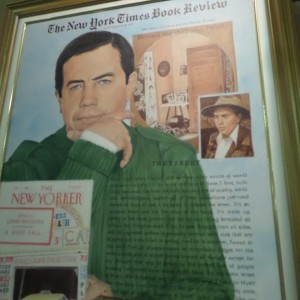 Enroute to the Mass I took a side trip over to the Ft. Abraham Lincoln a few miles south of Mandan. This is the place from which Gen. George Armstrong Custer took his ill-fated trip to the Little Big Horn in 1876. Of course, this is April, and nothing was open, but I could drive around, and walk to see the Slant Village and the Custer home. Earlier, a lady at the North Dakota Parks and Recreation Department pointed out that this year is the 50th anniversary of the Parks Department, and each State Park will have their day. Fort Abraham Lincoln’s Day is Memorial Day, May 25, 2015. 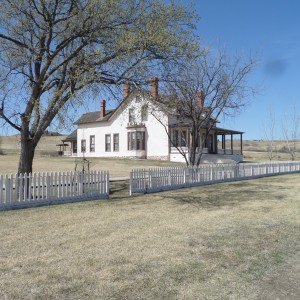 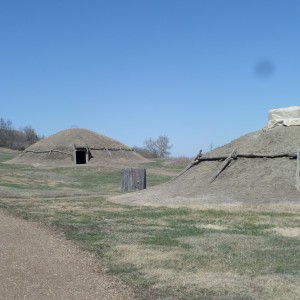 Visit over in late afternoon, back on I-94 East, this time to Fargo.
Dominating the trip back was thinking about May, 1965, when my wife, Barbara, was released from Bismarck’s St. Alexius Hospital, and we began the long trip by car to Minneapolis where she was to be admitted for a kidney transplant at the University of Minnesota Hospital. It was her only remaining option to live beyond 22. 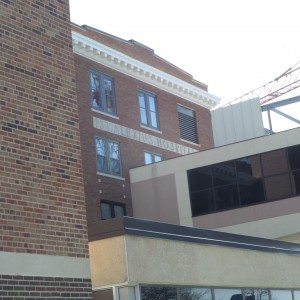 Back then, late May, 1965, someplace along 94, east of Bismarck, the radiator hose chose to burst. Luckily, we were close to one of the very few exits with a gas station. At Valley City, she and her mother and brother and our year old son Tom took the train the rest of the way to Minneapolis. I continued on by car. Barbara was admitted to the hospital, and died there July 24, 1965. 50 years ago, now. A major marker on my life path. We all have such….
I drove on, finding a motel in Moorhead MN about 9:30 pm.
In the morning, at the house breakfast, I saw a number of people wearing bright t-shirts, “Team Fred” on on one side; “Muscle Walk 2015” on the other. I asked a family of four, “what’s this about?” “A walk for ALS” the Dad said. Fred, I surmised, was someone they knew who has ALS, but I don’t know that.
I went out to the car, remembering the earlier kindness in Jamestown, the free beard trim, took out my checkbook, wrote out a check for $50 to Muscle Walk 2015, went back into the restaurant and left the check with the family: “have a great day”.
Probably the gift surprised them.
Pay it forward, thanks in part to the kind beauty salon person in Jamestown.
It was a great day….
POSTNOTE: Sunday evening came one of those calls from an Unknown Caller. It was Jim F, from Carrington ND. Turned out he was the “Fred” from Team Fred, and he was calling to thank me for the donation Saturday morning. It was a most pleasant surprise; we knew people in common, it turned out.
https://thoughtstowardsabetterworld.org/wp-content/uploads/2022/04/thoughts-300x138-1.jpg 0 0 dickbernard https://thoughtstowardsabetterworld.org/wp-content/uploads/2022/04/thoughts-300x138-1.jpg dickbernard2015-04-19 19:16:312015-04-19 19:16:31#1017 – Dick Bernard: Reminiscing Along North Dakota's I-94
0 replies