If you need to know what the blog headline is about, you’re probably not much interested in politics…. The longer headline: “Hillary Clinton announces her candidacy for Presidency of the United States beginning 2017.”

This is a long post, mostly my personal political history – “me ‘n Hillary” – from early 2008. If you’re not into history, my current comments begin and end this post…. What is bold-faced from the 2008 comments, in the middle of this post, are those which seem most pertinent, then and now.
Humor me, and read on, just this once, whether or not “politics” interests you.
Please try…. Politics is what makes or breaks this democracy of ours. We Americans are very sloppy about how we go about deciding who should represent us, and we are even more careless about how our government works at all levels. It is a surprise our system works at all, and that’s a shame.
*
Sunday, April 12, 2015, Hillary Clinton announced that she’s a candidate for President. I see that as good news, though as of right now I haven’t read much about it. There’s plenty of time, and there will be, doubtless, daily polls about what the public thinks – the polls slanted, of course, in the direction the pollster wishes. A great deal of “heat”, hardly any “light”.
One thing is certain, in my opinion: Hillary Clinton is savvy, and she’ll run a very solid campaign.

I’ve long been impressed with Hillary. Most of the words which follow come from two posts I wrote at the time of the Minnesota Precinct Caucuses Feb 5, 2008.
Those who stop by this blog from time to time know that I like to add photos to posts. There are none of her included here for a simple reason: I’ve never actually seen Hillary Clinton in person, anywhere. A few days before I wrote the below comments in 2008, Feb. 2, I saw Barack Obama in person in Minneapolis. He was very impressive. He is ever more impressive; we’re fortunate to have him as chief executive of this immense country.
(click to enlarge) 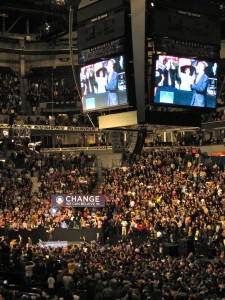 At the end of this post, I’ll summarize what I see, at this moment. Whether you like or detest politics, the results determine what we are as a country, and you’re a participant, whether you think you’re a participant or not. (Not voting, or voting for “Mickey Mouse” or a candidate who has no chance whatever, is voting. And everyone has only a single vote, one time, in each election.)
Get involved. Your own future is determined by who will be elected for all offices in each election.
Now, a look back.
*
P&J#1566 “Super Tuesday” posted February 6, 2008:
“I’m guessing I’ve heard from everyone who has an interest in responding to last night, so here ’tis. Thanks. [Lots of people responded about their experience at their own 2008 caucus. These are not included here.]
*****
Yes, I “gotta get a life”…I got curious, yesterday, about the age U.S. Presidents were when they assumed the presidency.
My time to run is definitely past: Here they are since 1901: Teddy Roosevelt, 42; Taft, 51; Wilson, 56; Harding, 55; Coolidge, 50; Hoover,
54; FDR, 50; Truman, 60; Eisenhower, 62; JFK, 43; LBJ, 54; Nixon, 55; Ford, 61; Carter, 52; Reagan, 69 (THERE’S HOPE – not much); GHWB, 64; Bill
Clinton, 46; the Decider [George W Bush], 54. (At the end of this P&J, I list the rest of the bunch….)
Funny how they seemed so old back when I knew ’em as a kid.
If elected, McCain, 71, would be the oldest President ever elected, older even than the Gipper [Ronald Reagan]. You can bet that this point will be whispered.
*****
CAUCUSING:
I’ve attended precinct caucuses for years. Our particular caucus location for the last several years has been a junior high school a 15 minute drive from me, just off I-94.
That’s 15 minutes on a normal day.
Tonight it took almost an hour to drive to the location, most of that time spent in the last half mile jammed bumper to bumper on the freeway and the exit ramp, and then another 15 minutes to walk to the school from my car which I had to park on the shoulder of the road.
The time spent had everything to do with the precinct caucus attendance, which was HUGE.
My caucus location was teeming with young people. The young guy who serves me coffee most mornings at my local Caribou was there, volunteering for Al Franken. It is nice to make occasional unexpected connections like these.
I cast my ballot – for Hillary Clinton; registered to become a delegate to the next level – an important step, as the next level is where the state delegates are selected. We left early as Cathy needed to get home for some phone calls. It was a long chilly walk back to the car, then home.
Why my vote for Hillary? More on that in a later post.
(The presidential vote in Minnesota last night is simply a straw poll of those who actually registered at the caucus. It reflects who showed up. Nonetheless, it will be interesting to see the results.)
I got a sense, last night, that people in my area are wanting their country back. This was a school full of serious looking people. I’ll hope their commitment sustains itself, and in fact grows.
For myself, I’ll be proud to support whoever ends up as the nominees.
More on my impressions at the end of this post.
… [numerous comments from other members of my list, not included here]
Some final thoughts from Dick: a friend stopped by at coffee shop this morning, and said that 2100 were at our caucus location, compared with 700 two years ago. Vote was probably 2-1 for Obama at our location, even heavier in his affluent part of town. Chatting nearby were an older guy and a younger woman, both of whom I know a little, both apparently actively Republican. They were deeply involved in fearing the evils of socialized medicine and Hillary Clinton. So goes the debate.
As candidates so well know, there are two ‘peaks’ to attain: first, the nomination of their party; second, the election by the people, hopefully somewhat fairly through the process of ballots. For eons, organizers have come to know a basic truth about campaigns: don’t peak too soon! If your campaign reaches its high point six months out, you’ll lose as certainly as if it peaks six months after the election. The careful strategists are well aware of this dilemma. The Obama campaign is well aware of this dilemma as well. Super Tuesday (a media creation more than a substantive national primary) makes necessary aggressive and expensive campaigning by all the candidates. But it is just a media creation. Now comes the hard part: keeping people interested, engaged and committed.
This continued engagement can be a real problem. A lot of people showed up last night solely to vote for Clinton or Obama, and immediately left. A heap of us will gather (in my case) March 8, for a long, long, often very boring day at our Senate District Convention where the hard process of selecting delegates to the state convention begins. In turn, the state convention will select the national delegates, and on the process goes. We will work really hard on March 8, and listen to lots of people, and try to make some kind of reasoned and reasonable decisions. The people who came, voted and left, will have no appreciation of this part of the process.
Hang in there.
Here’s the rest of the Presidents, with their age at time of election.
George Washington, 56; John Adams, 61; Thomas Jefferson, 57; James Madison, 57; James Monroe, 58; John Quincy Adams, 57; Andrew Jackson, 51; Martin Van Buren, 54; William Henry Harrison, 67 (MY AGE, but he lived only 31 days in office – bad omen. Keep my day job); John Tyler, 50: James Knox Polk, 49; Zachary Taylor, 64; Millard Fillmore, 50; Franklin Pierce, 48; James Buchanan, 65; Abe Lincoln, 51; Andrew Johnson, 57; U.S. Grant, 46; Rutherford B. Hayes, 54; James Garfield, 49; Chester A. Arthur, 52; Grover Cleveland, 47; Benjamin Harrison, 55; William McKinley, 53.