Mid-week, my spouse, Cathy, read an April 6 commentary on a sneaky change in Federal Pension Protection law which interested and troubled her.
At the end of the commentary was an invitation to attend a meeting on Saturday, and so we went over, not knowing what to expect.
First, I’d recommend getting to know PensionRights.org, an organization which keeps close tabs on actions relating to pension law. They were an integral part of the program.
The focus of the meeting, which attracted near 200 people, mostly older men and Teamster retirees, was (in my opinion) a sneaky and very dangerous amendment to another major piece of legislation passed in December, 2014. (see “New Law Allows Cuts to Retiree Pensions” at PensionRights.org.) There was no debate, and thus no accountability. Too many such amendments are passed these days…. 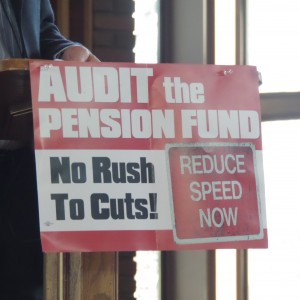 Both my wife and I, retired working people, benefit from Social Security, Pension Plans and 401-k. We come from a generation where pensions were common, and during which 401-k plans were initiated as opportunities for workers to supplement their other benefits.
What is happening today is an attack on Pension Plans, coupled with a fear campaign against future stability of Social Security, that Soc Sec is not safe, leading to a psychological reliance by younger people on the seductive but very dangerous 401-k plans, the riskiest of the retirement options for ordinary citizens…and a cash cow for those whose business is making money.
Young people are at risk if they heed the siren song of relying on individual 401-k savings accounts for their retirement, and allowing Social Security and Pensions to die.
But also, in my opinion, the real long-term victims of the 401-k scam will be the very perpetrators of anti-pension and social security. They are, in effect, strangling the very source of much of their wealth: consumable income from social security and pensions which is spent by retired middle and lower class in this country.
Saturdays meeting had something of a nostalgic cast to it: it reminded me of passionate union meetings in my past, where people expressed their opinions, no holds barred. Then they went to work for needed change.
There was one “duet” of opinions Saturday that particularly intrigued me.
Among the speakers was a retired truck driver from Ohio, 31 years a Teamster, who railed on against the Law change, and said, directly, that he was a registered Democrat, but he couldn’t see any difference between Republicans and Democrats, and he was ready to become Independent and deal with people who supported his particular agenda. 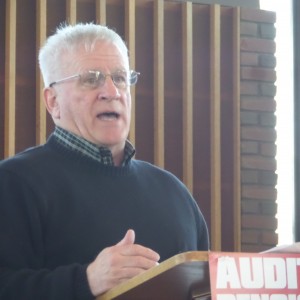 I’ve heard his type before: blame, broad-brush, and retreat into a single issue which becomes their sole priority. Lots of working stiffs buy his same line, unfortunately, at their peril.
In fact, I was recalling, as I listened to him, that it was the Teamsters and their individual members, as much as any single entity, who led to Ronald Reagan’s election in 1980, and de facto enabled anti-labor initiatives which continue. Back then, they were living the pretty good life, and didn’t think that they needed a united labor voice. It has been a bad time for unions ever since.
But I was not the only one listening to his rant against Democrats and Republicans in Washington.
Someone rose in the back, and it turned out to be Minnesota’s 8th District DFL Congressman Rick Nolan, who was as passionate as I’ve ever seen a public official about an issue.
He was angry at the broad brush labeling of all of Congress by the retired Teamster guy, and he made his case with all of us. People were listening.
I tried to get a good photo, but he was so animated that it was impossible. Here’s as close as I could get. 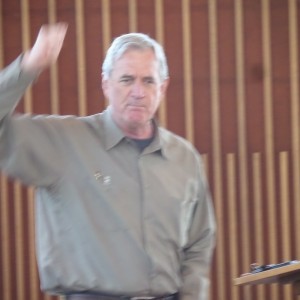 Overall, there was lots of good advice given on Saturday, about the need for workers to get off their duffs, learn about the issues, and get organized.
But there is also a need to get rid of all sorts of naive notions about how decision making takes place in a society such as ours.
If we are uninvolved, we collectively will get exactly what we deserve. 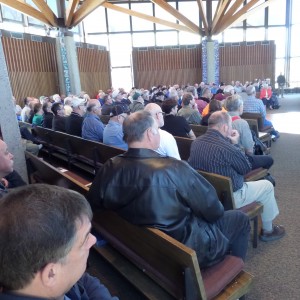 Part of the audience April 11

I’m glad I went to the meeting today; glad that Cathy called the commentary to my attention.
Now I’ve called your attention to it.
Time to get to work.
Here’s a photo of the organizing committee which brought us together on Saturday. They are the face of Teamsters. Thank you, to them. 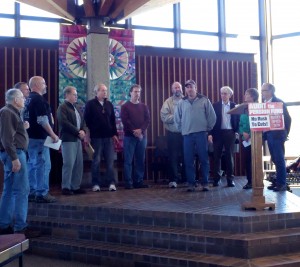 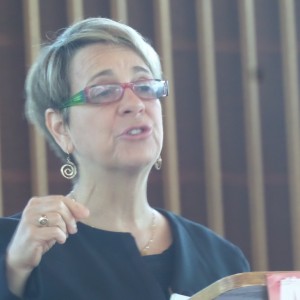 COMMENTS
from Norm Hanson: I enjoyed reading your blog regarding the attack on many current pension and security plans by uninformed people and/or people who buy into the rhetoric about the “beauty” of going to 401K plans and other plans tied to the stock market. Most of us are like you in that we depend upon Social Security, private or public pensions, investments and, of course, our good looks, to live during our senior years.
It always amazes me that some of the most outspoken proponents for such changes…or as you correctly noted, support for Reagan several years ago…are the folks most likely to be hurt by such changes…or by the election of Reagan…I just never have been able to get a handle on why that is so often so.
I know that in some cases there is s social issue hook such as pro-life/pro-choice, patriotism as they define it, fear of the changes taking place around them and hoping for a return to the good old days that probably never actually existed other than in their nostalgic minds and so on.
They openly support such changes…or Reagan…for such reasons even though those changes…or Reagan…can and do hurt them as much or more so than anyone else.
Thanks
PERSONAL POSTNOTE:
I am soon 75, and more by happenstance than intent I inherited the wisdom of elders, and later, colleagues, to achieve what I do not take for granted today: Social Security, a Pension, and a 401-k.
Of course, like all workers in our country, I paid into Social Security my entire career, with employer participation. Social Security was and is a “savings account” for future needs. The system was painless and worked extremely well for those who needed its benefits (not only people who retired at age 62, but those whose retirement came early due to disability, etc.)
Social Security is insurance, and has been since its founding. Those who were covered paid their premiums, like regular insurance.
From time to time its flaws have been corrected. It has always been there (in my lifetime) and it will always be there unless its future beneficiaries don’t insist on its being protected for them, later. (If one reads further about the Law above described, and other similar pieces of legislation, there seems always to be a clever exception added to such laws, for people who are already receiving the benefits. The exception says in one way or another, “you older folks don’t have to worry. This only applies to future recipients.” It is seductive and it is extremely dangerous.)
I also have a Pension, a private plan, which some of my colleagues had the foresight to lobby for early in my own career as a union staff member. I don’t recall thinking much about the issue at the time, which was in the early 1970s when I was in my 30s. Pension benefits are not freebies. They were paid for by reallocation and deferral of wages earned at the time. They were, in effect, a savings account for every member. In recent years they have been re-framed as unearned entitlements by their enemies. They were earned benefits.
About the same time as my Pension, we received an option for additional personal Savings, the 401-k. The plan I was in, and other plans, varied a bit, but in their essence they all worked the same. They were a system of deferred income, to be open for withdrawal after retirement or for certain specific reasons. Individual Retirement Accounts (IRAs) were in the same family.
For us, personally, the Social Security and the Pension are our income foundation. We are very fortunate to also have moderate 401-k’s, but such a vehicle would not, I can absolutely assure young people, work long term. It is far too risky, and too tempting to not contribute to when something like a vacation, or a new car, looks too tempting.
Caveat emptor.
https://thoughtstowardsabetterworld.org/wp-content/uploads/2022/04/thoughts-300x138-1.jpg 0 0 dickbernard https://thoughtstowardsabetterworld.org/wp-content/uploads/2022/04/thoughts-300x138-1.jpg dickbernard2015-04-12 04:23:442015-04-12 04:23:44#1015 – Dick Bernard: A Piece of Drama on an Important Issue
0 replies