Yesterday my cousin Mary Kay and I traveled to Dubuque to the funeral of Marion Placke. It was a long day: the odometer read 550 miles traveled when I arrived home; and the clock showed 16 hours from the time between when I left and arrived home.
But it was an extraordinary day; a very, very rich day.
Marion was one of those folks who, unsung, bring richness to the lives of those around them.
In the casket, she was 98, by her own self-declaration a month or so ago, “an old lady”.
A solitary photo by her casket was from some long ago time:
(click on photos to enlarge) 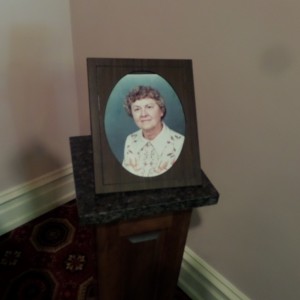 She never married nor had children of her own. Most of her life her occupation was “housekeeper” at various places. Her obituary did not include a listing of this or that degree, or such.
The fall and broken hip that preceded her death by about a week occurred at her long-time home on the slope of Sinsinawa Mound in southwest Wisconsin, a few miles from Dubuque, only half a mile or so from the nearby house in which she was born August 1, 1916.
But these few words hardly do justice to Marion Placke.
Her nephew, Fr. Wayne Droessler, himself a retired Catholic Priest, gave a wonderful tribute to his Aunt Marion, as part of his homily at the Mass. At the end of the Mass, before dismissal, he kissed her casket in a fond expression of farewell. At the mausoleum, the casket was surrounded by young people who up until the most recent years had been “babysat” by Marion and her sister Lucina Stangl. I particularly noticed one young person near the coffin, who was obviously grief-stricken at the loss of the person she quite likely called “Grandma”. 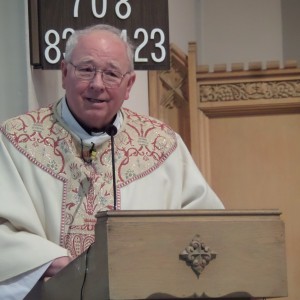 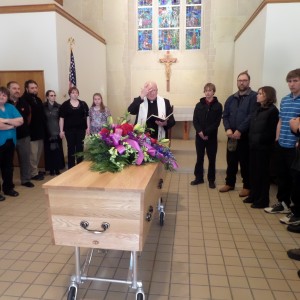 For we travelers from the Twin Cities, who seldom actually saw Marion in person, much of our trip down and back was dominated by memories of this or that about Marion and Lucina(Lu) Stangl.
Marion was a superb story-teller and this, coupled with her love of family history, brought the Berning family (our common root) and the old days alive in a extraordinarily rich way.
The two sisters – Lu was 6 years Marion’s senior, and died in 2010 at 100 – were adventuresome.
Mary Kay related that some years back, when Lu was a spring chicken of 92 (Marion, 86), Lu and Marion went white-water rafting. At the end of the trip, they learned that Lu was the oldest person who’d ever done that trip!
Ten years ago, in July, 2005, the ladies and several family members made the trip up to a mini-reunion at the North Dakota farm.
While there, they expressed an interest in visiting Whitestone Hill Battlefield monument, perhaps 25 miles away.
Those of who’d been there know that there is a rather daunting climb up to the monument itself, so we expected that Lucina and Marion would stay at the parking lot, and we younger “kids” would do the walk up the hill.
Not these ladies: both of them climbed the hill, reached the top, and spent some time at the monument itself (photos below).
That trip up that hill helps define, for me, the example left by Marion Placke and her sister. I could give more examples, but that will suffice.
Others will have their own memories.
A fond farewell. 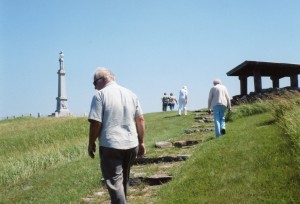 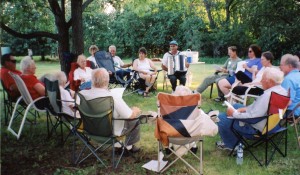 A small reunion at the Vincent and Edith Busch farm, Berlin, ND, July 2005. 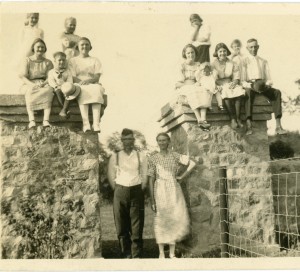 Marion Placke (2nd from right) at Memorial Park, Grand Rapids ND, July 1920. Her mother had come up to assist her Aunt Rosa Busch, who gave birth to Edithe. Others in the photo are Busch’s and possibly other Placke’s