I watched every hour of the now complete and powerful Ken Burns/Lynn Novick retrospective on the War in Vietnam, 1945-75.

Today begins reflection after a powerful two weeks. What does this all mean to me? To us? How can I personally translate Vietnam into personal action to help us grow, to learn, from this tragedy.

Likely, midweek next week I’ll share my thoughts, such as they will be; and I encourage you to share yours as well, including at this blog space. If you wish your own blog space, just let me know. dick_bernardATmsnDOTcom. All I ask is respectful opinion, and willingness to share your name and your own personal role 1961-75. There is no judgement. We did as we did, then. Vietnam is an indelible part of our national history. We need to own and learn, from the experience.

To begin, among a flood of memories the series brought to the surface for me, below are two: meeting Daniel Ellsberg Feb. 23, 2008; and a totally unexpected visit to the newly dedicated Vietnam Memorial in Washington DC, Nov. 14, 1982.

Then, remembering a powerful afternoon with Daniel Ellsberg and other anti-Vietnam war activists, Feb. 23, 2008: Daniel Ellsberg 2008001 Daniel was here in connection with a powerful program conceived by peace activist Frank Kroncke about the Minnesota 8, of which Mr. Kroncke was part. 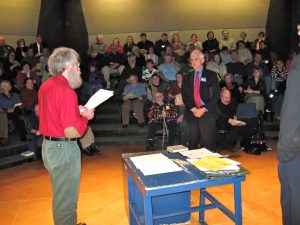 Daniel Ellsberg (at right) being recognized for his contribution to peace Feb. 23, 2008, Minneapolis MN.

Here are shared some reflections received in the last days from friends. Doubtless there are thousands of such reflections, and they are just beginning. Thomas Bass, America’s amnesia; Jon Pilger. I have not picked these to pass along; they were forwarded by friends. There is room for lots of points of view in the conversations that are already being generated by this powerful series.

At a time like this, I feel very, very, very small…what can I do?

It is not a matter of moving on; rather feeling very, very, very small.

There is a great plenty which can be done, one small act at a time.

Just being attentive to the plight of the people of Puerto Rico, a country 4% the size of Minnesota, with 60% of Minnesota’s population, devastated by hurricane. One is tempted to say that we should pay more attention to them, because they are all American citizens. But how about the residents of tiny Barbuda, essentially completely destroyed in an earlier hurricane. How do they fit into my world view? Humans, anywhere, are our brothers and sisters. The globe has no borders.

We don’t need to live within a single event. There are endless opportunities to get constructively involved.

Tuesday, October 3, I plan to join what promises to be a very interesting 4-session course on women who have won the Nobel Peace Prize. Here are details. Course leader, Maureen Reed, MD, has sterling credentials to lead this course. Among other experiences, she served as Executive Director of the Nobel Peace Prize Forum, through which she worked with both the Nobel Institute and its laureates. Consider enrolling, investing, in this class.

My friend, Donna, makes another suggestion: “I wanted to tell you about a group Rich and I have joined called the Interfaith Coalition on Immigration (ICOM). People from many faiths are doing some actions in regards to DACA and immigration. One action is to hold a vigil from 8-9 AM on the 2nd Tuesday of each month at the Whipple Federal Building [at Ft. Snelling – near the airport]. It is there that the immigrant deportation court is housed. Last vigil we had 85 people attend, including both concerned citizens and religious. Our goal is to grow this group so if you know of anyone interested please pass the word. After last vigil some attendees attended a court hearing on someone in deportation. We have done this as well and it truly feels so evil. Many of these deportations tear stable families apart. Anyway I hope you can join us sometime and spread the word. The next vigil is scheduled for October 10, National Immigration Day.”

Be “on the court” for solutions.

POSTNOTE:
Take time to read this: Don’t Bother. It is long and it is depressing, but it cries out for activism. We live in this country.

The International Criminal Court #1301: The Medicine Wheel and The North Country Trail
Scroll to top