Thoughts on the final day of 2016.
Remembering a North Dakota farm family. 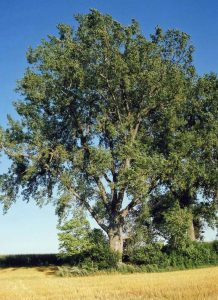 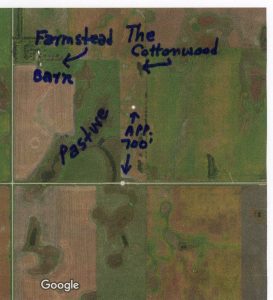 Since 1934 an impressive cottonwood tree has stood watch over the former Busch farm between Berlin and Grand Rapids ND. I took the above photo, and wrote a story about the tree in 2005. The story is accessible here.
A few blocks to the west of the tree stands a piece of pastureland, which, 106 years after the prairies became a farm, has yet to see a plow. For reasons only my Uncle Vince knows, this pasture was a very important piece of ground to him, even though it was only a small part of the farm.
This was a pasture well known to Vince and Edithe’s parents and brothers and sisters, going back to the beginning of the farm in 1905; and known to any of their nephews and nieces who visited on occasion. We became familiar with “cowpaths” and the lane from pasture to the barn, and if old enough we could watch the cows being milked by hand, and even try our hand at milking. In a sense, the cows were part of physical life of the Busch place, the milk cows with names.
For most of its years it was pasture for a few milk cows. Here is a photo from the 1940s labeled Aunt “Edithe’s favorite milk cow.” Unfortunately, the cows name isn’t included; most certainly she had a name. 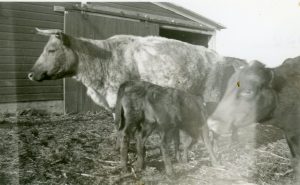 My first vivid memory of the pasture is in the winter, sometime in the 1940s, watching what seemed to be gigantic white rabbits loping across snowdrifts. It wasn’t an illusion: 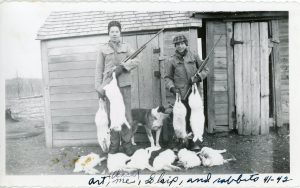 Uncle Vincent and Uncle Art with a productive hunt for rabbits, sometime in 1941-42.

Over the years, the rabbits disappeared, for some reason never explained to me.
As for the cows, we grandkids, who showed up from 1940 on, knew the drill: Twice a day, cows came home via the cowpath – force of habit, I guess – with a lead cow. Here’s an old slide from Nov. 1980 showing my Uncle and cousin Mary Kay. (double click to see the cows in the background, or a closer view of the cowpath) 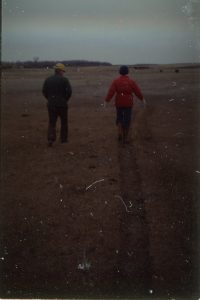 Uncle Vince and Cousin Mary Kay (on a cowpath in the pasture, Nov. 1980)

In my growing up time, there were maybe 10-15 cows maximum, milked by hand twice a day, later usually by Edithe and Grandma Rosa. Kids were allowed to try milking, but it was hard work – the fun wore off very quickly. Cats hung around for a possible treat. Once in awhile a cow “kicked the bucket” partly full of milk, probably the origin of the saying about dying.
The cream separator initially was hand-powered. Cream and milk would be kept in cans, and kept cool in a water tank by the door of the barn. For years, Uncle Art kept the old separator; later he gave it to me; I think my sister has it now…”antiques” have their day…a nuisance, but yet a reminder of what once was.
I can remember the tedious job of hand-churning cream to make butter: the butter didn’t just magically appear. We kids didn’t have the patience, I’d guess. But once in awhile you could actually see the butter begin to appear.
Once in awhile we might be there when a truck came from LaMoure to pick up the milk and cream. In LaMoure was a small Land-o-Lakes Creamery which made things like butter and, perhaps, ice cream. At least once I can remember a visit to the creamery. Every time, however, we stopped at the Dairy Bar in the same building (photo below) for ice cream. Successive renditions of that Dairy Bar continued until very recently. I think it’s now closed. 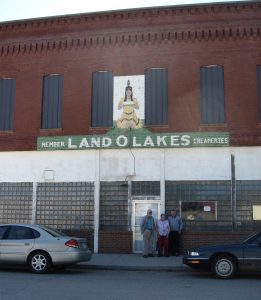 LaMoure ND June 28, 2009. Edithe, Vincent and Dick Bernard at what used to be the Creamery and the Dairy Bar in LaMoure. We all appear to be tired. Must have been a busy day.

I can’t fix a date when the Busch’s stopped milking. It probably came sometime in the 1960s, before Grandpa died, and by then Grandma was in her late 70s. There quite likely was an extended period without cows in the pasture. Someone could correct me on this.
Beginning about 1980, Uncle Vincent began to graze a small herd of beef cattle in the pasture. This lasted until the bad winter of 1996-97, when snow conditions and his own advancing age made it impossible for Vincent to take care of the cattle. On occasion one or another of us would go with Vince to the pasture. The cattle were familiar with him; for strangers, particularly if there was a newborn calf nearby, extreme caution was advised. Mama’s cottoned no nonsense. Strangers were a threat.
After 1997, for reasons known only to Vince, this particular piece of pastureland lay unused, except he allowed a neighbor to cut and bail the hay for a fee. 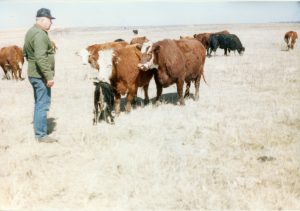 Vincent in the pasture spring of 1987, photo by his sister, Edithe.

From 2006 on, Vince and Edithe lived in LaMoure, and the trips to the farm normally did not include the pastureland.
But in early October of 2012, just about a month or so before Aunt Edithe went into the Nursing Home in LaMoure, Uncle Vince felt a need to go out to that pasture one last time, and that we did, on a very breezy and chilly North Dakota fall afternoon. It would have been wiser to stay home, but Vincent was determined, and we went.
This particular day, Vince had his mind set on pieces of tin on an old feeding station out in the pasture, and we set about successfully taking off the roof, later to be used to cover a broken window or two on an old shed on the farmstead. 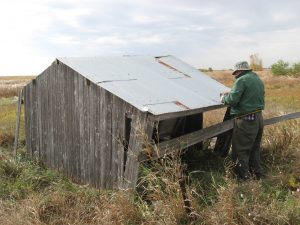 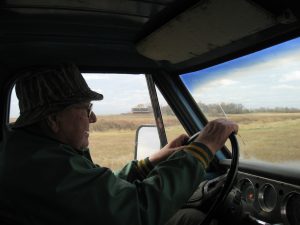 The farm has now been sold, and the young couple with three young children who now own the farmstead and have a contract to purchase the pasture in a given time period. When I was at the farm in early October, I saw the two calves who, by next summer, will bring farm life to the pasture, as the family is rebringing life to a rural North Dakota farmstead. 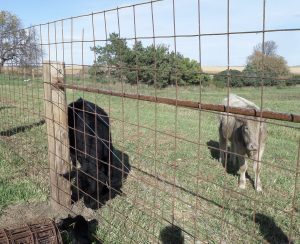 Uncle Vince would be pleased, of that I’m certain.
As this year ends, and a new one begins, what do you remember about your growing up years when your life was being formed? 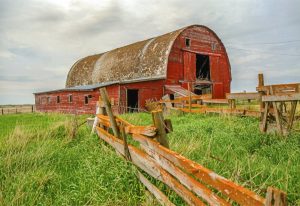 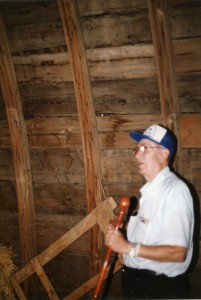 Henry Bernard in the hay mow June, 1991, standing by the roof beams he helped construct in 1949.

Look closely at the below and you can see all five Bernard kids, including John, who was then a year old. Plus Mary Ann, Florence, Frank and Richard. Henry is hidden behind Richard. 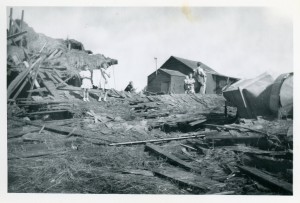 The Bernard kids the morning after the barn went down, summer 1949. Richard (Dick) is the kid facing away from the camera.