Saturday, our local Senator and state representatives met in an open meeting with residents of the district.  Here’s a photo taken today, with a youthful constituent “lobbying” very articulately about his issue. 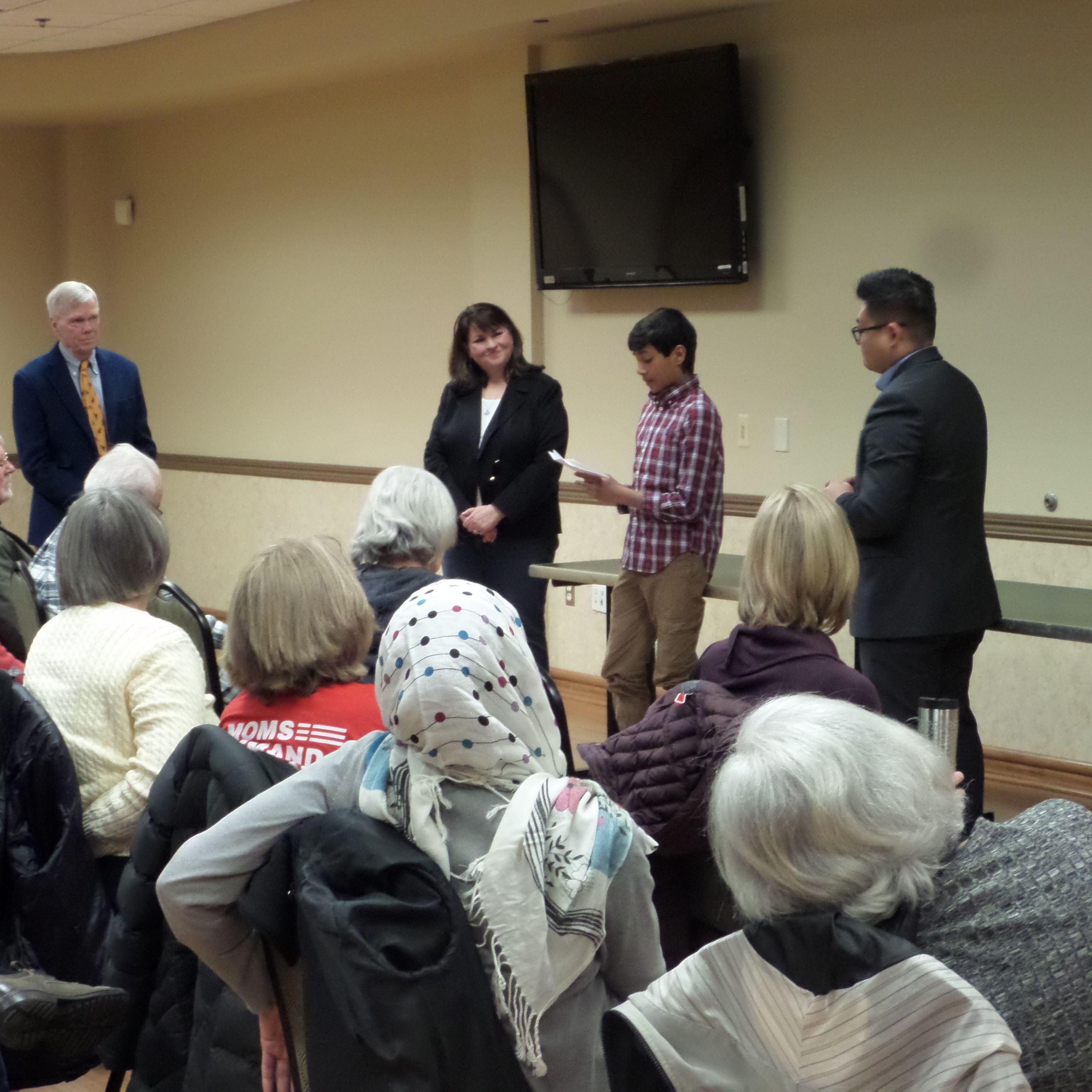 This meeting was like others I have attended.  This day I counted about 50 of us in the room (below).  The meeting was well publicized and open to the public.  This legislative district has approximately 80,000 residents: thus far less than one in 1,000 residents took an hour off of their Saturday to meet their legislators in person. 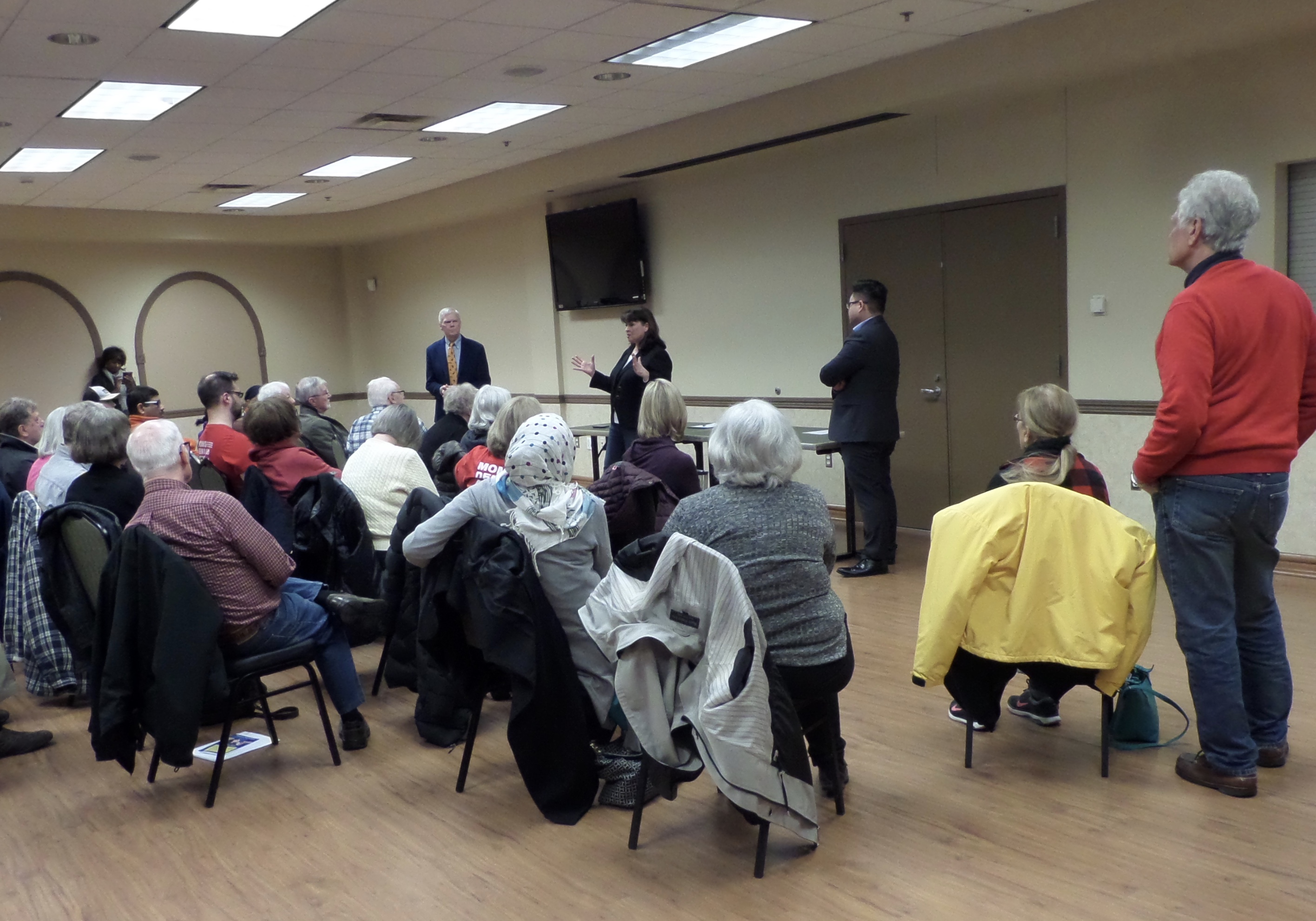 There was nothing particularly unusual about this meeting: people were civil; people came as citizens; some of the citizens represented their particular special interest (such as the student); the legislators reflected back on the complexity of their tasks, working with 200 other legislators from all over the state of Minnesota; each Senate District having approximately 79,000 citizens in a state with over 5,300,000 population, all having diverse needs and expectations.

This day my attention was drawn to a question I was asking myself.  My thoughts went back to another meeting four days earlier.

Saturday we sat in the typical arrangement for meetings: almost all of us seated, facing our three representatives.  There was absolutely nothing unusual about this, including the tenor of this meeting, which was positive.

But I wondered to myself: what if the room arrangement was such that all the chairs were in a circle, and during the meeting, everybody, and all issues, were equally valued, and those in attendance were required to not only hear the assorted issues, but to resolve them, as we expect our legislature to reasonably resolve the immense numbers of issues before it.

Succinctly, this expectation, however reasonable, is laughable, especially in our complex society where, it seems, we only act to elect somebody who we can then credit or blame for doing, or not doing, what we want as an individual.

The task is impossible, even when we have a great team of legislators.

A retired former colleague of mine spoke to the group along the same lines as I had been thinking.  In essence: we are the “government”, each and every one of us.  We all deserve the credit, or the blame for the dysfunction we complain about every day.

The other meeting, on Tuesday, had 29 people in the circle, most knew each other, some for a long time, but an issue dropped into the group like a tornado into an unsuspecting community, and people were pretty clueless about getting things resolved, though there were professionals on relationships in that circle.  The tendency was to retreat into hardened positions, or  to simply avoid what was going on and, like me, stay silent.  In coming weeks I’ll see if they find a path to resolution (and I have to be part of that solution part of “they”, even though I observed I only knew 11 of the 29 at the meeting, and I had first learned of the issue – one important to me – only a few days earlier.)

In a society, especially a complex one like ours, getting engaged in solutions is not easy.  First, one has to divest him or herself of feeling he or she has the answer, or avoiding dealing with the question.

A CLOSING THOUGHT: One of the crucial dilemmas in our society is the glut of often false information we are subjected to each day.

At the session today, the conversation got around to universal health care, however those words are defined.  A lady who said she grew up in the United Kingdom talked about how valued it was to not have to worry about medical accessibility there.  Into the mix came the word “socialism”, now highly charged in some circles.  Another participant told of some friend of his in England whose relative knew someone who said that the English system was so bad that a person with a certain condition would have to go to prison to qualify for national health.

Who is one to believe?  The person with personal experience; or the person relying on and conveying incomplete and second hand information at best?

There are endless variations.  Maybe the lady was lying (I don’t think so); maybe the horror story in England was typical and true (I highly doubt it, absent evidence.)

In the end, each of us has to become much less sloppy, intellectually, and learn to sort out reasonable fact from demonstrable fiction.  We have to become better informed.  We are either part of the problem or part of the solution.

We cannot work together to solve problems and be suckers.