It’s been an intellectually stimulating seven days, and on the other side, I have more hope for the future than before.

Among the events: recognizing the beginning of the 75th year of the United Nations; the Centennial celebration of the League of Women Voters of Minnesota, and the ratification of Women’s Suffrage; an inspiring celebration by my local Democrat Farmer Labor (DFL) Senate District; and a stimulating, student centered, Human Rights Forum at Augsburg University.  There were other happenings as well.

There is no way to summarize the week, but I’ll try. 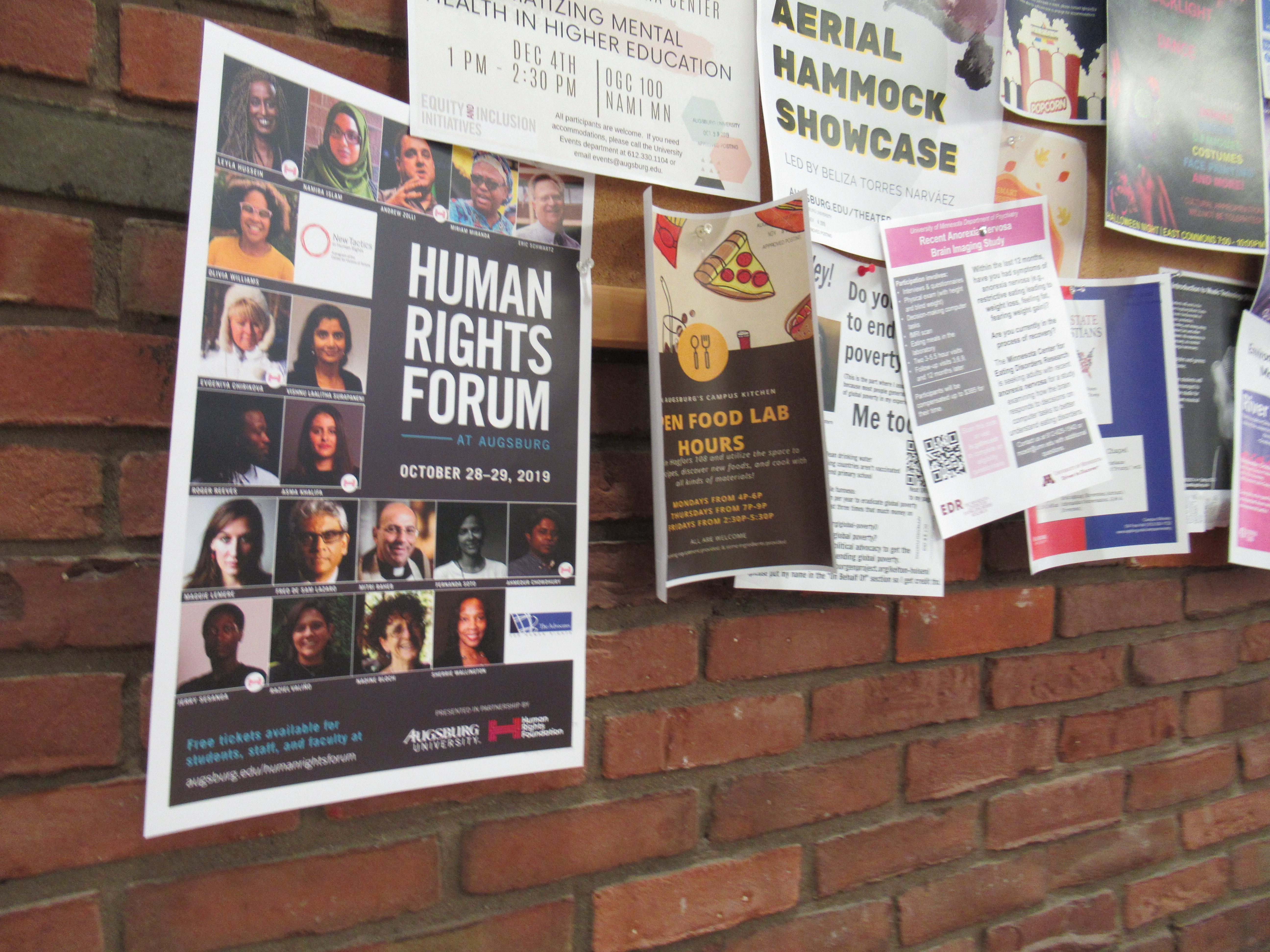 Last first: Monday and Tuesday was the Human Rights Forum at Augsburg University, Minneapolis.  This was #31, the first 30 called the Nobel Peace Prize Forum and Nobel Peace Prize Festival.  Personally I was involved in about 15 of these over the years.  The several hundred participants this year were primarily(it appeared) high school and college students; but there were quite a few people who looked like my age.  Here was the faculty for the event. I was privileged to sit in on sessions by 11 of the 28 presentors, hearing their views and participant questions and feedback.  Last Monday evening a dozen of we ‘elders’ participated in a “Peace Meal” with a dozen young people.  This was an experiment in dialogue.  It was a success, but obviously not perfect.

Saturday was the Centennial Celebration of the Minnesota League of Women Voters.  Here  is the ‘meat’ of the program booklet – the honorees/speakers at this Centennial event.  Personally, the most powerful speech was the last, by Andrea Jenkins.  Her talk emphasized Sojourner Truth.  (see photo at end of this post).

Here is a display panel of an abbreviated timeline of Women’s Suffrage in the United States (there a bit more information in the program booklet): 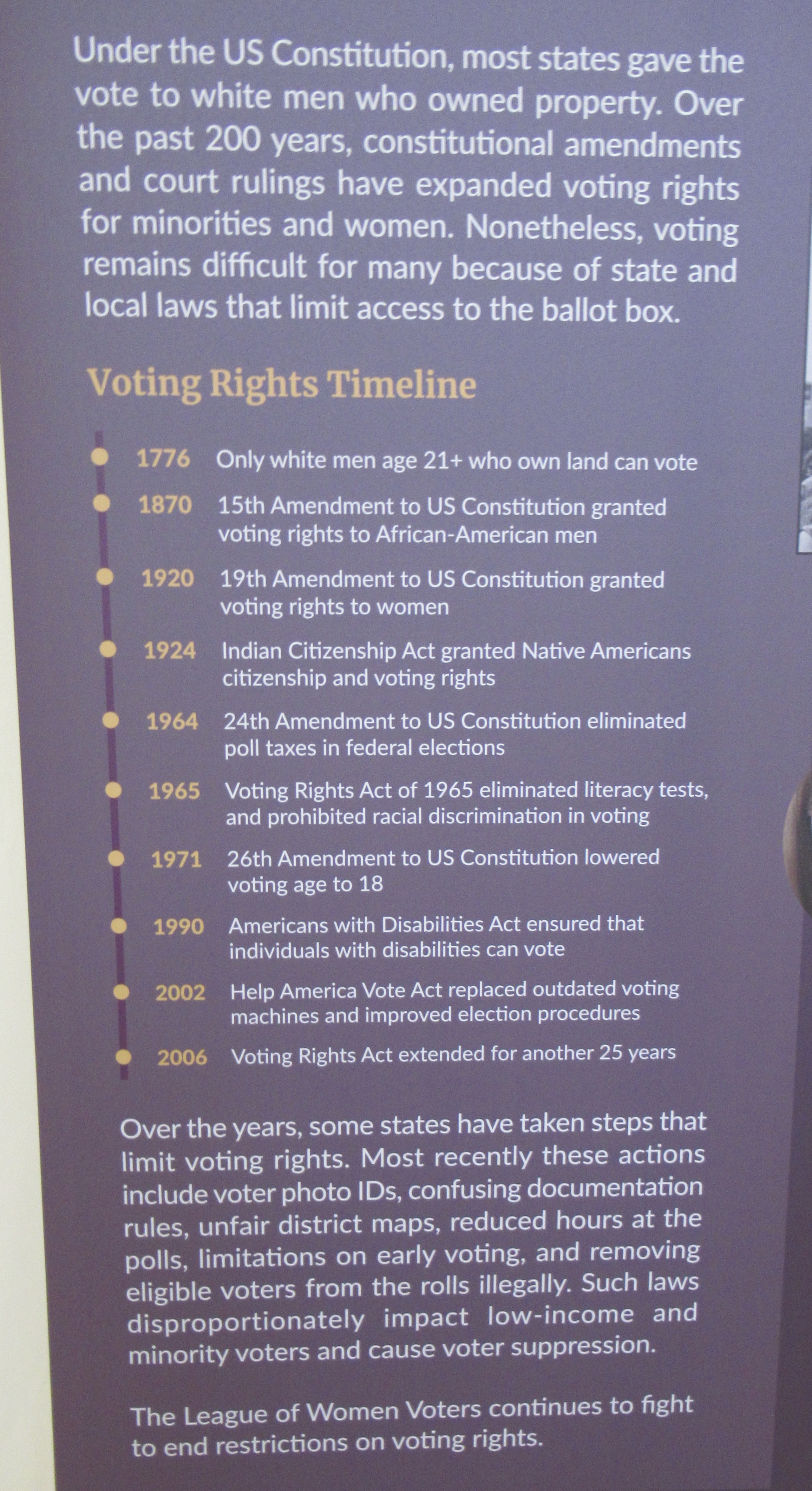 The two other major events of the week, the 75th year of the United Nations, and the Senate District 53 gathering were also significant.

The Senate District gathering brought together mostly a new generation of leaders for the District, primarily women and a generation at least younger than ourselves.  It was impressive.  Local politics is like family.  Because it is local, it is more personal, and competitive.

I wrote one of the organizers : “what was particularly inspiring was the composition of the group, and particularly the spontaneous testimonial of Char [a young Senate District activist] about David [a long-time recognized DFL organizer who had died a year or so earlier].”   The generational change is absolutely essential, but not necessarily easy.  People need to work together. 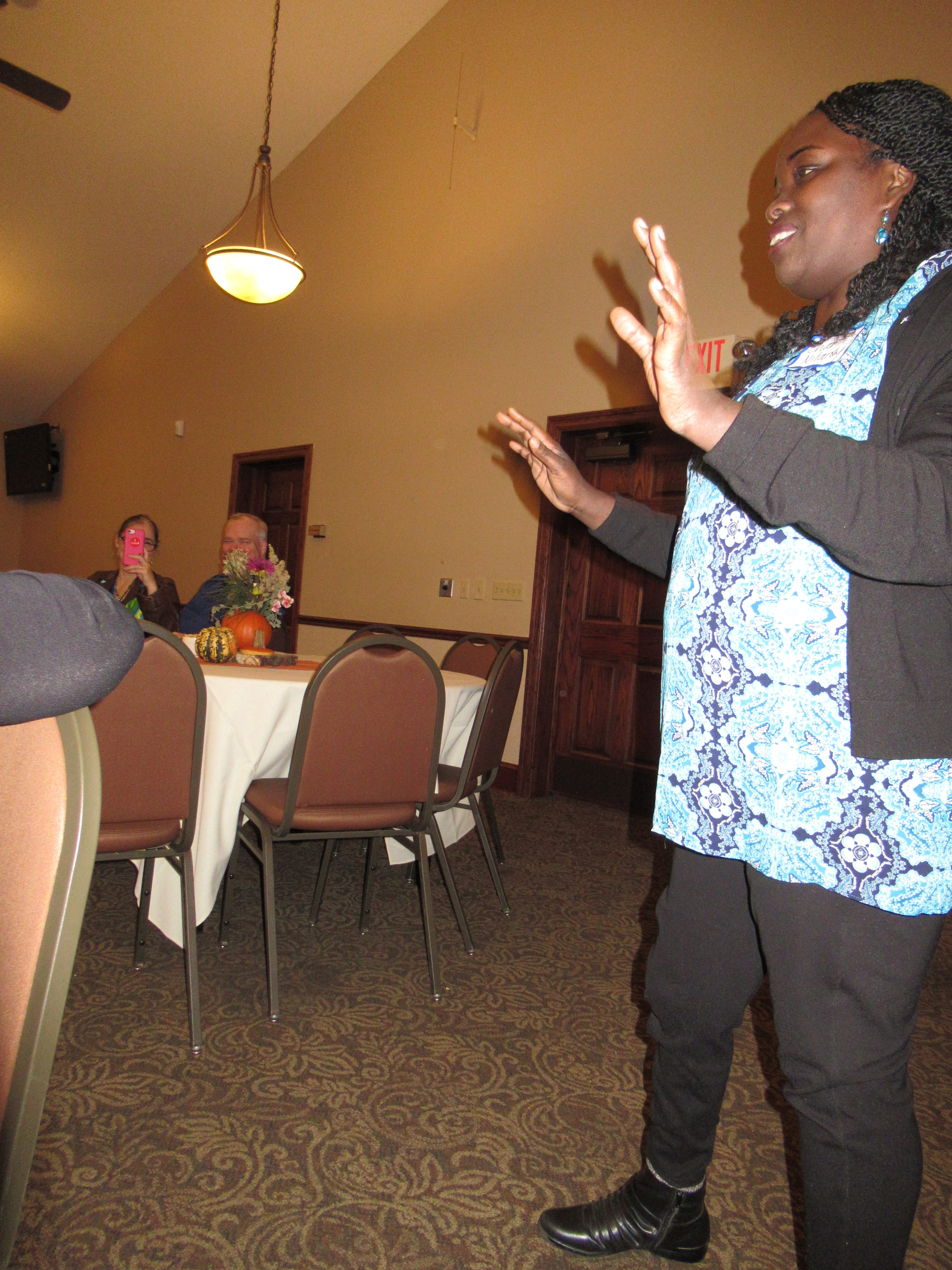 The UN gathering beginning the 75th years of the UN was very interesting, and I briefly described it in my Oct. 27 post: “we were at a very interesting talk by the spokesperson for the Secretary-General of the United Nations, Stephane Dujarric.   The nature of his position is representing a diplomat, the Secretary-General, whose job is to work at keeping 193 nations of immense diversity generally working together.  Saturday’s paper had an opinion piece by John Rash, which talks about Syria, including a couple of quotes from Dujarric.  Take a look, here.” 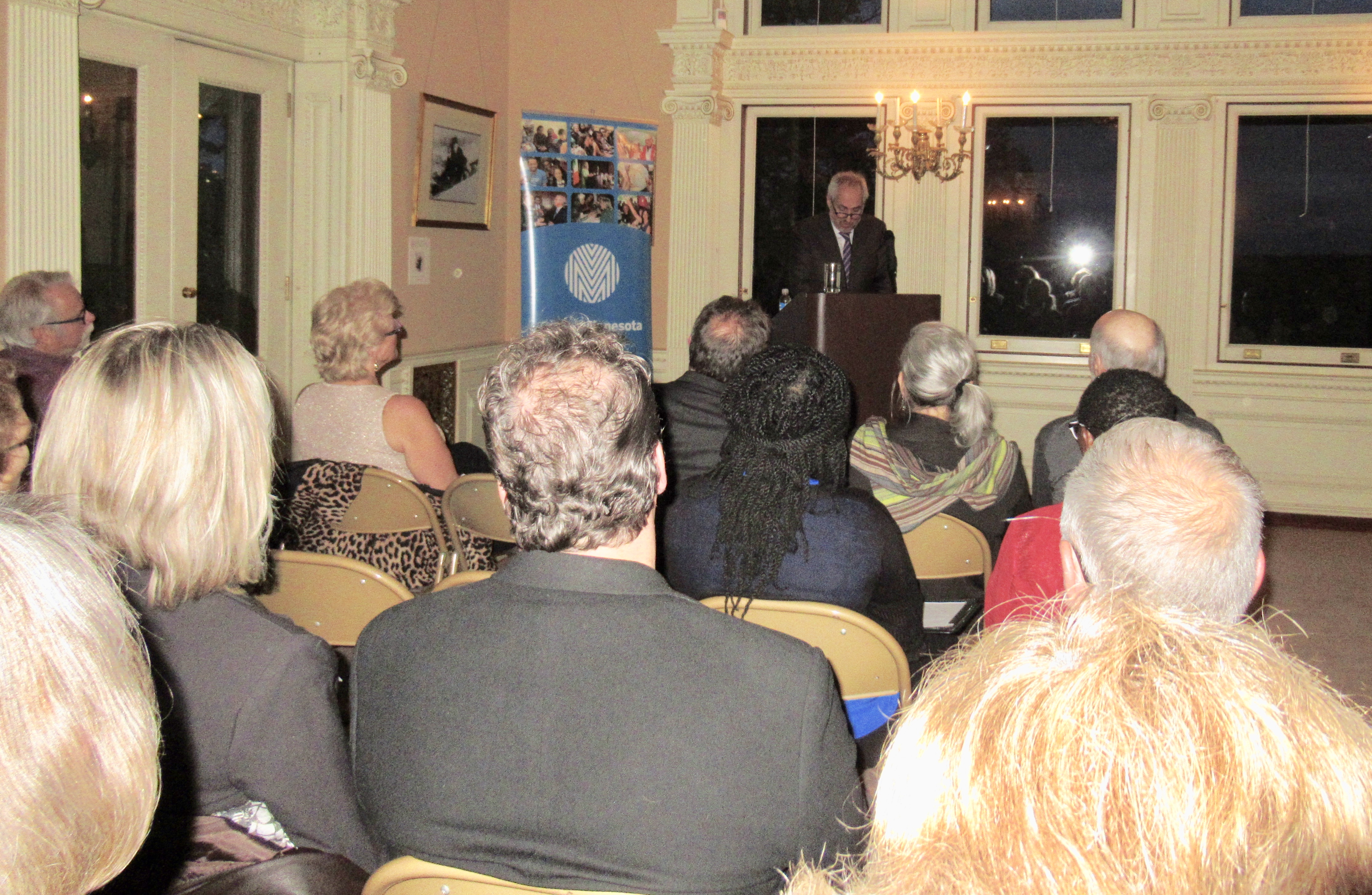 Stephane Dujarric, spokesman for the Secretary General of the United Nations, Oct 23, 2019

The UN is a voluntary association of nations, formed at the end of World War II.  The UN is NOT “World Government”, and by its very nature, as an association of originally 51, and now 193 countries, ranging from postage stamp size and power to mega-powers, it is not perfect.  Five countries – the “winners” of WWII – have permanent veto authority, and thus can veto any action proposed, including removing the veto power.  (At the beginning, countries in some cases were not identical to today: for instance, what we know as India today, was, then, what is now known as the separate countries of India, Pakistan and Bangladesh.)

Nonetheless, regardless of imperfection, the system is much preferable to having no system at all.  We are a global society, permanently and irrevocably together on one earth.

It is useful to learn more about the UN, and I would recommend a recent book by my friend, Dr. Joseph Schwartzberg, which was his life work: “Transforming the United Nations System, Designs for A Workable World“.  Information on the book can be found at Joe Schwartzberg’s website, here.  Joe died in September, 2018, at age 90.

POSTNOTE: “TIPPING POINTS” is my chosen title for this post, because in each of the events described, deep change is underway, and inevitable.

Women’s Suffrage took a very long time; the need for youth involvement is imperative, as the future is what youth will live in, not people like myself; young people and leaders of color were seen in great abundance at the Human Rights conference; the nations of the World, the UN, have to figure out how to live together, or face mutual destruction in a global planet.  “Nationalism” is temporarily ascendant, again, but is not a sustainable dream.  We are seeing the results of polarized politics, far beyond what used to be considered normal competition (I’ve often used the analogy of an eagle, the national symbol, about the need for two wings, neither left nor right dominant.  A one-winged eagle does not fly….  Each of us have had “tipping points” in our lives; in some cases, many of these points.  Think about some of yours. 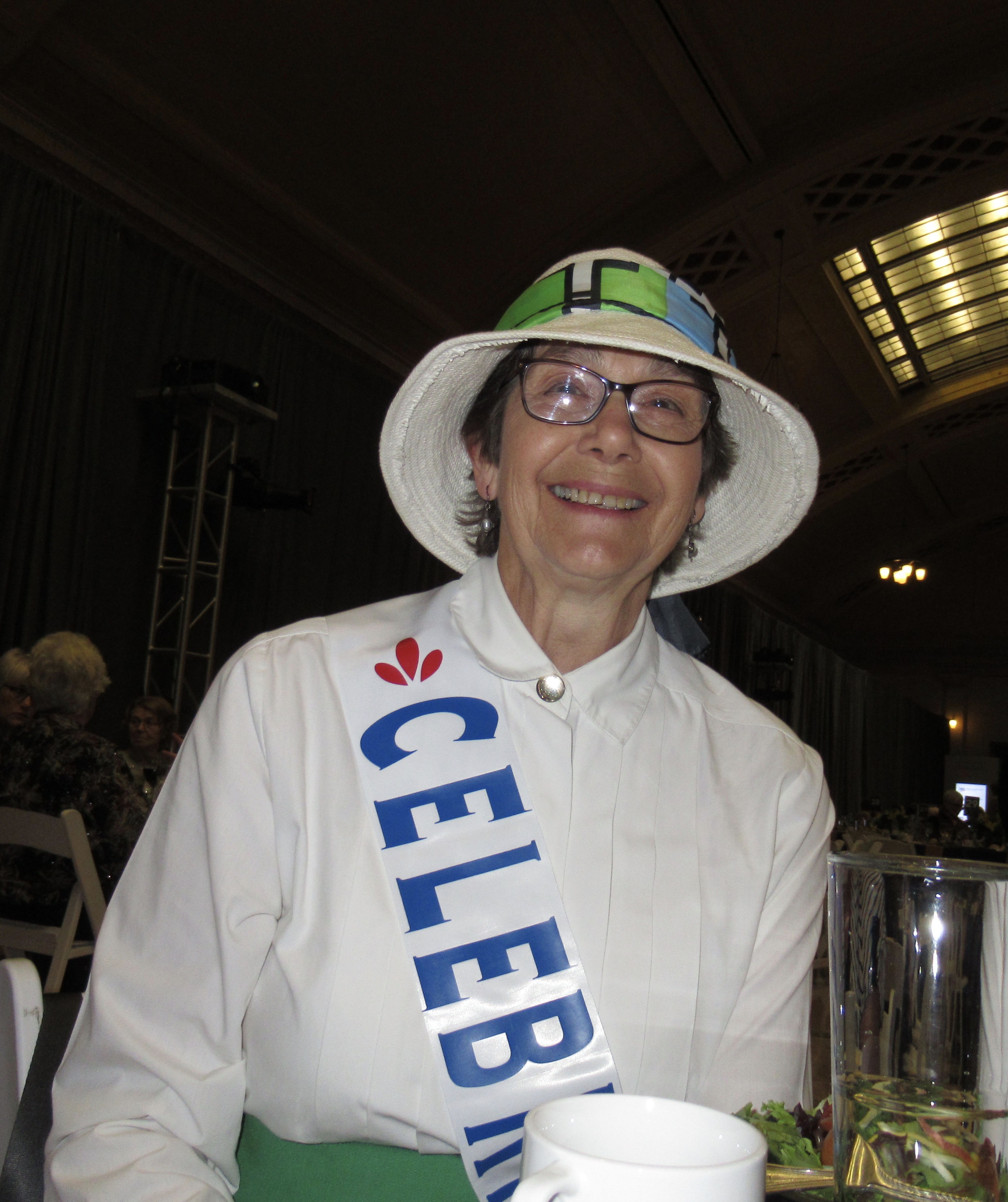 My sister, Flo, long-time LWV activist and the one who invited us to the celebration, reenacted Alice Paul, Quaker, born 1885, who was a suffragette at the time of the Equal Right to Vote.  Alice Paul’s bio is here. 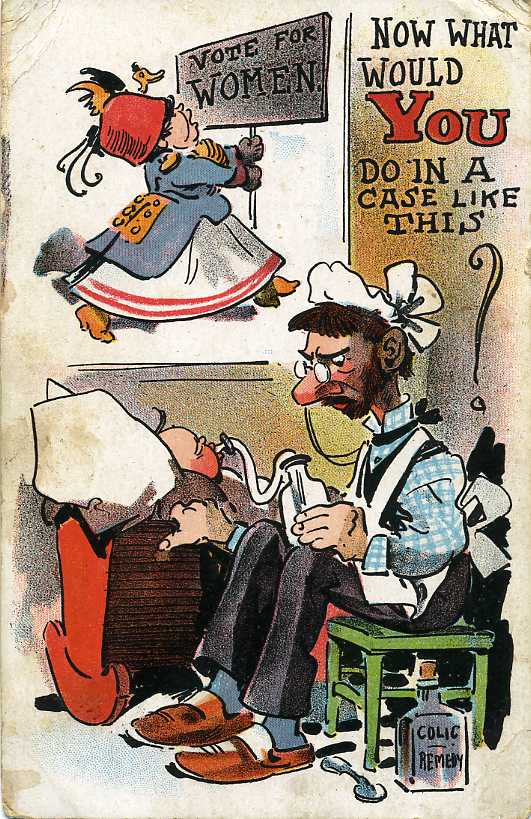 1910 postcard from one sister to another, my grandmother Rosa Busch on the farm in ND.