My take on today’s news below (see August 14)…but first a diversion…a piece of nostalgia.

On the recent trip to ND (recounted here), I bought a book on small town post offices which included a history of the post office in North Dakota by Kevin Carvell, who was long-time staff for U.S. Senator from N Dakota, Byron Dorgen.  The 7-page history (NDakota Postal History 3) was very interesting, and I sent it on to some folks, including my brother, John, who I thought might remember Kevin, which led to the following e-mail from John this morning, passed along with John’s permission.  The time period and place (Zap ND) we’re talking about is Spring Break 1970.  More about John at the very end of this post.  I do plan to do one or two more articles relating to North Dakota in the near future.  Watch for them.  (For regular readers, I’ve added to my August 8 post on North Dakota if you’re interested.)

John Bernard, August 13, 2021: Thanks for the very interesting article.

“Yes – I remember Kevin Carvell well. I met him a couple of times; and even though we were on rival staff at rival universities [University of North Dakota (UND) and North Dakota State University (NDSU)] we still got together at a couple of different conferences.

I’m sure you know the backstory of the Zip to Zap [google for much more] – it actually started because Kevin mused in the student newspaper at NDSU that he was going to have a staff picnic, and he figured a good place to hold it would be in Zap, North Dakota – primarily because [of] the name. The student newspaper wire service picked it up, and the rest is history. He was always just a little bit embarrassed by that.

Since I was sort of on assignments for the UND Dakota Student [photographer for the newspaper], I made it out to Zap about a half a day before the majority of the hordes of out of state students came in – and I can already see the problem. There were already massive beer trucks backed up to the two bars of the town, and a couple of other temporary bars. As you well know, as the night wore on things got quite a bit more drunk and rowdy. And I was snapping pictures throughout the entire thing. My most memorable shots came the next morning as the North Dakota National Guard came in and basically drove the students out of town – it was actually the day before the actual party was supposed to happen.

Unfortunately among the people being driven out of town [was] my ride back to Grand Forks – so I did about four or five separate hitchhiking legs and managed to make it back to Fargo, checked at the Spectrum (NDSU student paper) using my Kevin Carvell card. [I] Somehow found out that Life magazine was looking for some pictures of the event. Called them, and they arranged a courier to pick up my negatives. I actually used the Spectrum student dark room to process the negatives, sent them off, and if it weren’t for the Cambodian invasion that same weekend, they were going to be featured that week in Life.”

Dick: So…my brothers brush with fame was pole-axed by War….  He says he still has the photo negatives somewhere.  I said, don’t throw them out…maybe he’ll look more actively for them in the detritus of life out in California where he’s lived for many years…stay tuned, and more about John at the end of the post.

Most every hour of every day, these days, is “breaking news”.  Today’s blog, which could have posted most any day this week, started out with three components:

I recommend Just Above Sunset and Letters from an American as very good ongoing sources of information about national and international issues.

More items were added to my list as the week went on.  Let’s leave the list at that. 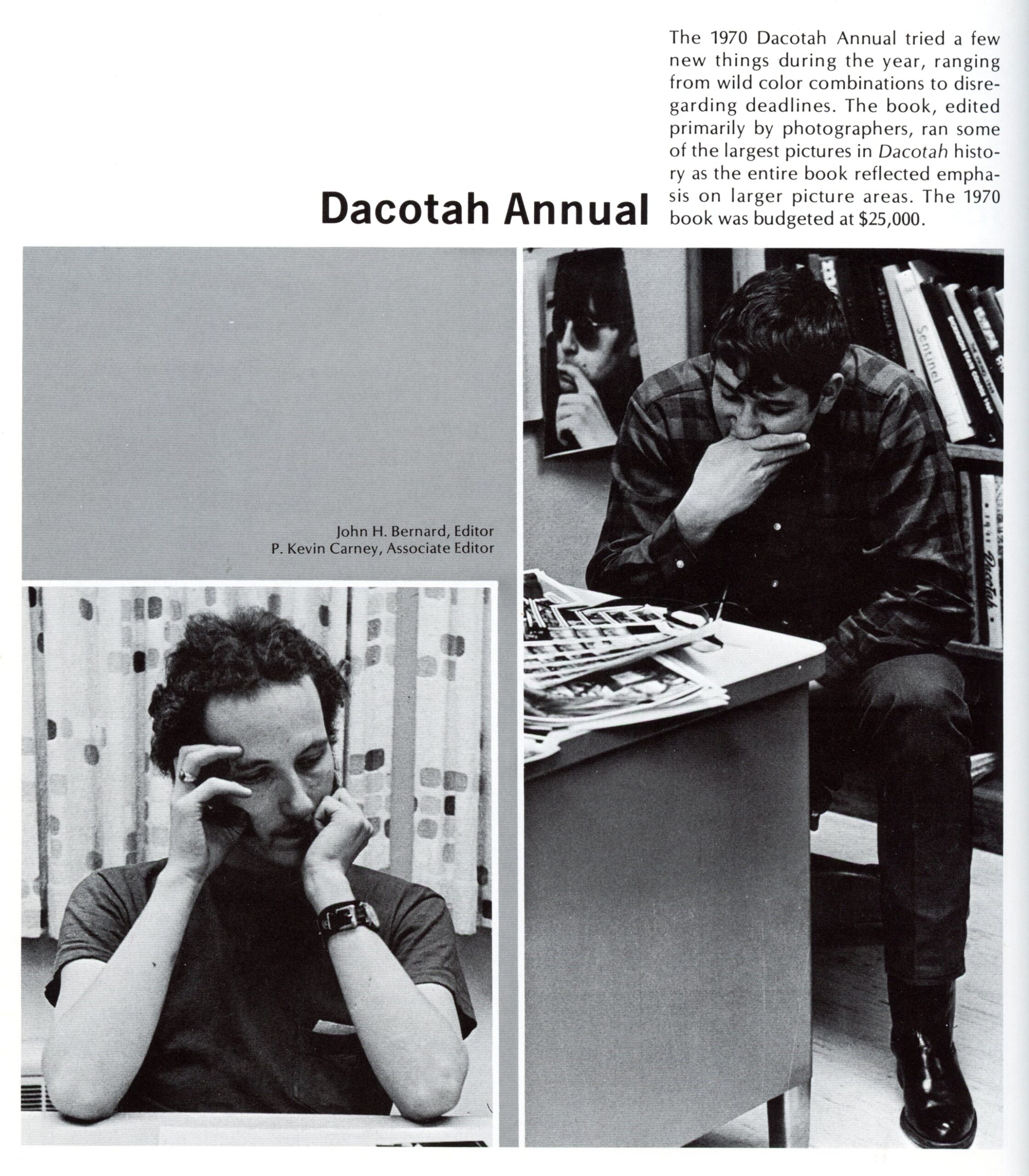 John Bernard, at right, Editor of the Dacotah, University of North Dakota, Grand Forks 1970. John graduated from UND in 1970, thence 20 years as an Air Force officer as navigator on the big transports, including some interesting times into Vietnam.

from Jane: My father was a postmaster.  I worked my way through college in the post office — sorting mail and selling stamps.

from John: As suggested once or twice, you might enjoy reading the Book of Revelation.  The subjective story helps one to think more abstractly.

The decision to withdraw troops sounded good a few months ago.  Today, not so much.  The net effects in the world as we have known it might be that the USA has been taken down a peg.

response from Dick: Thanks.  Call it what one will, “magical thinking” “amnesia”…we Americans have long believed that we are above the rest of the pack.  We rally round the flag when we go to war; war is destructive; we manage to get out of the mess we got ourselves into; then the next generation rallies around the flag, again. So far, we’ve had the bigger “toys”, but we forget that conventional war – the good old days of big guns and nukes – is old hat.  Non-conventional is the problem now…relational in most cases.

In this case, we shouldn’t have gone into Afghanistan in the first place – the powers that be knew the history.  We did start the bombing in 2001, and the American people thought that was a great idea.  Now, of course, Biden will be thanked…and blamed…for getting out and anyone with a microphone will be presenting their pristine and perfect case, for whatever side they happen to be on.  He made his declaration to leave very early on, probably even in his campaign last year.

I feel sorry for the rank-and-file Afghanis especially.  They are the victims.  As for us, we were ill-advised to go in in the first place, but wars represent money to be made, as well as political points.  Just watch the tenor of the chattering class in coming weeks.

from Joyce:  Your column on the war in Afghanistan really brought back memories. I was part of an online discussion group at the time, one which had its origins in the Clinton impeachment. I argued that the war was a colossal mistake, that it would turn into a quagmire, and that the effective response to 9/11 would be a police action seeking out Osama bin Laden, and the other perpetrators. That, of course, is exactly what got bin Laden, and the war in Afghanistan dragged on, with no real objective, and no real end game. I was, of course, vilified for my comments in that forum, told that I was unpatriotic, that I hated America. In the lead-up to the war, I started stapling anti-war posters to my back fence, which were torn down and left in shreds on the lawn within a few hours. I kept making new signs each day, and each day I would find my sign shredded. That, of course, involved people coming onto my property to tear up my signs.

The war in Afghanistan never had a purpose; after 20 years, and countless deaths, Afghanistan is back where the war started. The war on Iraq was another disaster; again, I protested, again, I was vilified, again my signs were shredded. I did note that, soon after the war on Iraq turned south, the PNAC [Project for New American Century] website was taken down; I found that very telling. Cheney and Rumsfeld were proteges of Eric’s late stepfather; Eric and I often wondered what he thought of them, and what he thought of the wars. Andy never talked about politics, so, we never knew what he thought.  Almost every high level official in the W. Bush administration was a signatory to PNAC. I believe that Cheney, having been given the job of picking a VP candidate to run with W., realized how ill informed and easily influenced W was, and saw it as a golden opportunity to put the PNAC plan into place.
*
from a great and long-time friend on the Climate Issue: It is so sad that the so-called scientists that contributed to the IPPC report don’t understand what is driving our climate change.  It would be nice to have the opportunity to educate them and help them see the big picture, but that is not likely happen.
*
Dick in response: I’ve never disagreed with my friends informed analysis about climate in the longer term, but there is a very definite difference in our view points.  My friend, a scientist though not in the climate area, points to the inevitability of massive change in earths climate – a new ice age, etc.  But he talks in terms of natural change, over tens of thousands or perhaps millions of years, for such natural processes to occur, as they have and they will.  My point, and I think the point of the scientists of IPPC (who are not “so-called”) is that we humans are aggravating a very real problem and the consequences for us are in the short term, and we’re facilitating them, and they’re now out of our control.  Humans cannot adapt that quickly; the rest of the plant and animal environment is even more vulnerable.  It still is possible for humans to change their environment (i.e. air conditioning).  Plants do not have the adaptation capacity to rapidly and permanently adjust to lower moisture, or higher temperature, nor do animals.
Years ago another friend, Melvin, gave me a novel, apparently self-published, written by someone in a nearby suburb.  It’s title was “Losers” by Chuck Waible.  It was about a small Minnesota town during bad times of climate change.  I read it, and I found it to be very interesting, then I misplaced the book.  I found it again on Amazon, and I would recommend it to anyone.  It gives much food for thought.  Check it out.  Yes, it’s a novel, but it will cause you to think.
Related and possibly even worse problems are depletion of ground water resources, which took aeons to develop and don’t have centuries to survive at the present rate of usage.  And things like depletion of things like accessible fossil fuels, and release of methane in places like the melting of the tundra.  Things like these are imminent threats which we tend to ignore as being somebody else’s problem, but it is the immediate succeeding generations will not have such a casual view, since they will be living in tense times.   Be aware.
*
from Sue, apparently related to Afghanistan: I am here to ask a question.  Were you in the military?  Army perhaps?  I the answer is YES I will send another email.
*
response from Dick: I volunteered for the Draft in December, 1961, and served as an enlisted man until honorably discharged in September 1963.  I was discharged as Specialist 4th class.  I was asked about Officer Candidate School, since I was a college graduate, but I declined as I would have had to extend my term.  The Vietnam era is said to have begun in early 1961, and our unit was being trained for later Vietnam duty – on my time, we had the Cuban Missile Crisis, which was a dangerous time.  I watched President Kennedy with other soldiers on a small tv in a Colorado Army barracks in October 1962.  Other than being prepared, we never went anywhere.  My two brothers are retired Air Force officers, and both had Southeast Asia time in the late 1960s and early 1970s. I was U.S. Army 5th Inf Division (mechanized).  Photos I took are accessible here . This is one of many pages.
https://thoughtstowardsabetterworld.org/wp-content/uploads/2022/04/thoughts-300x138-1.jpg 0 0 dickbernard https://thoughtstowardsabetterworld.org/wp-content/uploads/2022/04/thoughts-300x138-1.jpg dickbernard2021-08-14 11:03:082021-08-16 10:12:04The Zip to Zap
2 replies