An October theme for this writer came to be the topic of Heritage. Previous posts on this topic are here and here and here.
October 18, found me in a classroom with multi-cultural students of French at Macalester College in St. Paul MN. We were listening to Professor of French and French in America scholar Professor Virgil Benoit of the University of North Dakota speak on the Michif culture of the Chippewa Reservation at Turtle Mountain ND. Dr. Benoit is a passionate defender of the French language, one of the major world languages, and one of the most studied languages in the world. 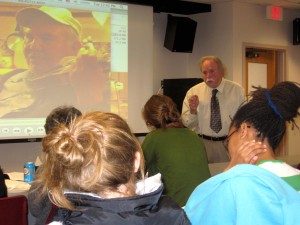 Dr. Benoit’s video guests (from a 2005 video interview) were Turtle Mountain Michifs Dorothy and Mike Page (Mike is pictured with the fiddle above). Mr. and Mrs. Page conversed about various aspects of their culture, including use of their native Michif language, a language infrequently used at this point in their history. “Michif” is a culture and a language, usually a combination of French-Canadian and Canadian Cree ethnicity and language and customs. (A number of links related to Michif, including a fascinating conversation spoken solely in Michif, can be found here.)
A few days later, October 21, we attended a most interesting talk presented at a Minneapolis Church by Jacqueline Regis about her experience growing up in the southern peninsula of Haiti (near Les Cayes). Haiti, the second free Republic in North America (independence in 1804) was born from a revolt of African slaves against their French masters. It was viewed as a threat by slave-holding and infant United States with consequences to the Haitians lasting to this day (click on Haiti history timeline link here NOTE. the reference to 1919 should be 1915). The loss of Haiti was a major defeat for the French, however, and a direct consequence of that defeat was the co-incident sale of the huge Louisiana Purchase to the United States in 1803.
Ms Regis, long in the United States, is fluent in English but grew up speaking Kreyol and learning French, now both official national languages of Haiti, though French is the language of government and commerce.
[UPDATE: see note at the end of this post] Here is a Haitian recipe for Haitian Pumpkin Soup, served at the gathering: Haitian Recipe001. Food, along with Fun and Family, are very important parts of all cultures.
As I was listening to the Page’s and Dr. Benoit on Tuesday I began to think of a regional stew often featured at large group gatherings in this area. It is called “Booyah“, sometimes “Booya”, and when I looked it up I found it is likely actually derived from a French word, and possibly was first used as a reference to the stew in Wisconsin.
Booyah, like Americans generally these days, consists of many common elements, but no Booyah is exactly the same.
So also is American culture: very diverse. And the diversity was reflected both in the classroom and the church sanctuary in the Twin Cities this week.
Dr. Benoit, the Page’s, Jacqueline Regis, and everyone who make up the American booyah have good reason to be proud of their heritages, as reflected in the rich tapestry that is the American culture.
UPDATE October 26: an incorrect link is shown in the pdf. A reader provided the correct link for the Pumpkin Soup recipe: see it here. Other recipes here and here
https://thoughtstowardsabetterworld.org/wp-content/uploads/2022/04/thoughts-300x138-1.jpg 0 0 dickbernard https://thoughtstowardsabetterworld.org/wp-content/uploads/2022/04/thoughts-300x138-1.jpg dickbernard2011-10-22 20:26:022011-10-22 20:26:02#459 -Dick Bernard: Heritage. Michif Language and Music; Haitian Family Story and Food. Thoughts of Booyah and Culture, generally.

I’m a regular usher at the Basilica of St. Mary in Minneapolis. It is an enjoyable task, and on occasion I see something unusual, as was the case this morning.
I was walking down the outside aisle on the downtown side of the Basilica, and saw a display case with a piece of sculpture (click to enlarge):

I looked more closely and it was just a couple of five gallon pails. Odd.
Then I looked at the identification of the particular work: 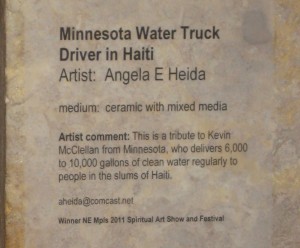 It all made more sense. Kevin McClellan has for many years been engaged in delivering fresh water to the slums of Haiti. It is his mission in life.
I googled Kevin and came up with this link, which has many photos etc.
This sighting reminded me of a special event happening on Friday of this week.
M. Jacqueline Regis, native of Haiti, and long-time corporate attorney, is being sworn in as a Judge in Minnesota’s Fourth Judicial District on Friday of this week. The event is Friday, September 23, 3-4 p.m. in the Thrivent Financial Building Auditorium, 625 Fourth Avenue South, Minneapolis. Here’s an earlier news account of her appointment to the Bench.
Soon-to-be Honorable Judge Jacqueline Regis grew up in Haiti. She has written a fascinating book about her growing up experience in Haiti. It is Daughter of L’Arsenal, and I presume remains available here.
Sincere congratulations to both Judge Regis and Kevin McClellan, who individually and together represent the best of our world society.
UPDATE September 24, 2011:
CONGRATULATIONS, Judge Jacqueline Regis
Here’s two photos at the ceremony September 23, 2011 (click on photo to enlarge) 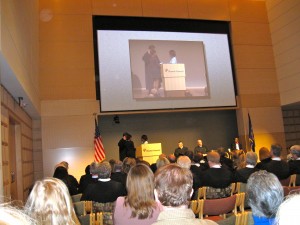 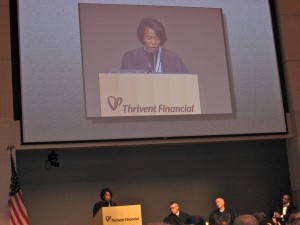 I walked away from a TV commentary show a few hours ago. The host is someone I like and respect; his guests were four leaders from a few of the infinite number of different organizations that claim to be of like minds, but really have very narrow, poorly thought out, and often opposing agendas.
The talk was about whether or not Social Security and Medicare were “socialist”. Three of the four guests had anti-socialism as a key tenet of their anti-government rant. Of course, none would touch Social Security or Medicare, always going back to their tried and true ‘talking points’. It ended with the usual result, which I first saw in the old “Crossfire” days of the 1990s, where NO ONE was LISTENING to ANYONE ELSE, DEFENSIVE and TRYING TO SHOUT EACH OTHER DOWN. The good idea of debate ended up very badly. Personally, I learned nothing.
Life is far too short….
Right before that, Cathy and I had been to an Interfaith Forum on the topic of denominational beliefs on Life after Death. Five panelists, friends and clergy all, took on the topic. They were Jewish, Muslim, Catholic, Lutheran and Congregational. It was a great pre-Halloween topic and it seemed there were about 200 of us in attendance. The Pastors talked, then there was opportunity for table talk, then then there was Q&A from audience to panelists. If I was to boil it down to its essence, it was respect personified. We all have our beliefs; we are sitting together seeking to understand; we were not throwing rocks at each other, as would have been the case in those vaunted “good old days” before tolerance was cool.
Two days earlier, nine of us had gathered at an office conference room in suburban Maplewood MN to watch a recent film about Haiti, and then to discuss what we’d seen.
The film, Poto Mitan, has five narrators. With a single, brief, exception, they are the only ones who speak, and they speak one at a time, telling their powerful stories. They are “Poto Mitans”, all poor women in Port-au-Prince who talk of survival against all odds. They speak in Kreyol, subtitled into English. The segments are separated by brief but beautiful and powerful prose read in English by Haitian author Edwidge Danticat, backgrounded by film of a woman braiding another woman’s hair.
Poto Mitan is a powerful film which our discussion leader, Jacqueline Regis, said brought her to tears when she first saw it. It was so mindful of her own mother and her own growing up years in Duvalier’s Haiti.
After the film we viewers dialogued with each other about what this film meant to us. There was nothing profound said, but the evening was profound. There was lots of respect among we diverse folks whose only commonality was an interest in Haiti. Our conversation reached no conclusion: it didn’t need to. When we walked out the door, the conversation was our conclusion: food for thought. Out of the gathering did come a proposal to a larger institution to use the film as centerpiece for a program on the first anniversary of the January 12, 2010, earthquake in Haiti, but that was just a proposal for someone else to implement, or not.
Oh if only we could re-learn the almost disappeared skill of dialogue.
So…What is “dialogue”?
I often go back to a great quote I found in Joseph Jaworsky’s 1996 book, “Synchronicity, the Inner Path of Leadership“. Preceding the chapter on “Dialogue: The Power of Collective Thinking“, Jaworsky includes the following from David Bohms “On Dialogue”:
“From time to time, (the) tribe (gathered) in a circle.
They just talked and talked and talked apparently to no purpose. They made no decisions. There was no leader. And everybody could participate.
There may have been wise men or wise women who were listened to a bit more – the older ones – but everybody could talk.
The meeting went on, until it finally seemed to stop for no reason at all and the group dispersed. Yet after that, everybody seemed to know what to do, because they understood each other so well. Then they could get together in smaller groups and do something or decide things.”