The Bells for Haiti Committee is grateful for the response around the United States to the one year anniversary project which culminated with bell-ringing and other events on or surrounding January 12, 2011.
The Committee met to debrief the activity on January 20, 2011, and following is its report.
GENERAL:
1. The project evolved over about a one month period beginning in early December, 2010. All members of the Konbit-Haiti/MN list* were invited to attend. American Refugee Committee (ARC) hosted each meeting at its Minneapolis office, providing lunch (thank you, ARC!) There was no budget, no expenditures (other than those incurred by ARC or the committee members themselves). Committee members shared their time and pooled diverse talents to organize and publicize the event.
2. The group decided early on to keep the project very simple: Bell Ringing at 3:53 p.m. CST on the one year anniversary of the earthquake, January 12, 2011.
3. An early decision, thanks to Lisa Van Dyke, was to set up a Facebook events page which remains as Bells for Haiti.
4. Group members publicized the event through their own networks, including their own media contacts.
5. Haitian Lawyers Leadership Network and Minnesota Alliance of Peacemakers lent their name and support to the event as co-sponsors.
RESULTS:
1. The results on January 12, 2011, far exceeded the expectations of any of the group members.
A. The Mayors of Minneapolis and St. Paul issued proclamations for the day (see below, click on image to enlarge)
B. At peak, over 3500 people expressed an interest in Bells for Haiti via the Bells for Haiti Facebook page; these people were all over the United States and in Haiti.
C. Bells were rung in a wide variety of places all over the country, including Minneapolis City Hall, the Cathedral of St. Paul, the Basilica of St. Mary and many others places. (Partial list here.) There was significant media interest and coverage of the activity 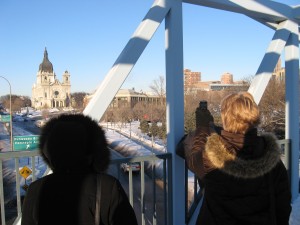 D. Additional activities and observances were held in various places to recognize the anniversary.
E. The specific activity added very positively to the media coverage of Haiti during the anniversary period.
2. Most importantly, the event brought together people with an interest in Haiti, and renewed commitment to help in the countries recovery.
LEARNINGS:
1. Representatives of diverse groups can come together on an ad hoc basis and accomplish significant goals which they would not be able to accomplish alone. (A quotation heard later the same day we debriefed: “None of us is as smart as all of us”, attributed to former MN Gov Rudy Perpich, on the benefits of sharing talents, resources and energy.
2. Used prudently and creatively, Facebook is an incredible resource for such an event. A Facebook event page is easy to create and to manage.
3. By focusing on things we agreed on, there was less loss of time on things on which we couldn’t agree on, and there were opportunities even within the committee meetings to enter into dialogue about items on which we might disagree.
FOR THE FUTURE:
1. We have decided to keep the Bells for Haiti Facebook page open, simply adding a very brief message at the beginning of the event, leaving all the rest of the content intact. We will be sending a brief message to all of those who participated, inviting them to share thoughts, plans etc., as time goes on. One of us will monitor the page periodically to remove postings that are inappropriate. We were new at this process, so made some mistakes, but apparently they were not fatal. We learned from our experience.
2. We are hoping for a one year anniversary meeting of the Haiti Konbit group on that groups one year anniversary: Tuesday, April 26, 2011. We are not in charge of this event, but solicit persons and groups who are willing to host, suggest topics and/or speakers for such a reunion gathering. 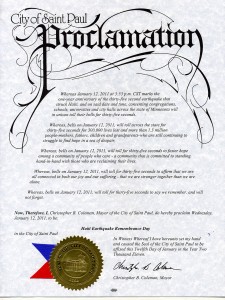 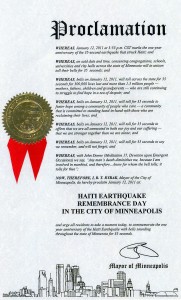