All best for a good New Year in 2023.  Today, I think most about the empty chairs I learn of each year, with increasing frequency.  They are the people I knew who passed on in the preceding twelve months, some who I learn of in notes from their survivor.  I’m not alone in this ritual, of course.  We all are.  My personal status report at end of this post, but today, a visit down memory lane from 1958.

I had just graduated from high school in May, 1958.  There were eight of us in the class.  (We moved frequently.  The previous year, at another school, there were two seniors….) 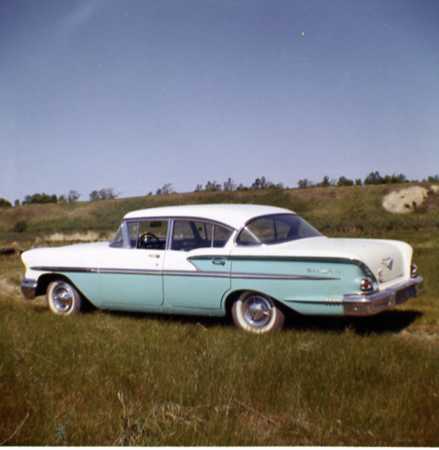 The new ’58 Chevy, photo by Dick Bernard at the Sykeston Dam.

I was the kid with the drivers license, and I had just graduated, and for some unremembered reason I got to take the car, solo, to visit a couple of friends from 8th grade at Ross ND.

I don’t recall our doing anything of particular significance.  We were just out for a ride.  The end of our route was New Town, ND, which had been founded due to the filling of the Garrison Dam reservoir in the 1950s which made the towns of Sanish and Van Hook uninhabitable.  A wikipedia article is here.

When we went there, there was no particular agenda other than to see New Town – as least I don’t recall any other intention.

I’ve done a quick review of the books I have about North Dakota – all from the 1950s and 60s – and none make any mention of the damage done to the lands of the native Americans who had occupied this land far longer than the settlers.  The only government interest in Garrison seems to have been storage of water for future irrigation…at least so seems the narrative in the three books I have.  The irrigation prospects seem not to have worked out; there is some power generation from the dammed up reservoir.

For we kids, in the spring of 1958, it was just a fun ride.  I dropped my friends off, then I drove home to Sykeston.

The post came to mind, today, because of an e-mail received from a long-time friend yesterday.  I reprint the note with his permission: “Your closing comment about the strange things you remember [from the past] brings an unhappy experience to mind. On my first day in school, I was running out of the schoolhouse and tripped on the edge of the entrance concrete slab and fell face down into the gravel.  This little girl came running over to see if I was okay.  That little girl was [a classmate], the first time I had ever seen her.  That image of her bending over to see how I was remains with me to this day.  She was such a special person, and our relationship lasted for ever and ever.  Each summer when I made my trips back to North Dakota, I would swing by their farm and visit with her and her husband.   Last August I learned that my so special friend that I have known for 76 years is no longer with us.  It is hard for me to comprehend what [her husband]  is going through after their 62-year relationship.  One of the toughest aspects of life is the constant loss of loved ones, but I guess it is what it is.

Many of you know me only through this blog.

Personally, those who know me and see me frequently know I’m basically as usual.  It was last year, this week, the day after Christmas, when the diagnosis of colon cancer visited me.  And December, 2018, when I had my encounter with heart valve replacement.

I’ve written about both here, and I seem to have done pretty well.  This week, as usual, I did daily 2 1/2 mile brisk walks indoors.  I try to act my age; hopefully I’ll be reminded if I don’t….

I feel normal, which does not mean the same as last year, 10 or 20 years ago.  We all know this is true, from our own experience!  We march on, best we can.

Down in the garage is my Dad’s typewriter, on which he wrote probably thousands of letters to people over the years.  On the cover he pasted a portion of a placemat from his retirement residence at Our Lady of the Snows in Belleville IL.  The advice there is very simple and makes lots of sense, here:

Live for TodayDream for Tomorrow Learn from Yesterday

COMMENTS (more at the end of the page)

from Beth: Good for you to keep writing Dick.  I’m still slowing inching through two legal size drawers with 70 lbs of letters 1930-1952 from my mom, her parents, my father.  They are a treasure to me.  I have a plethora of letters I wrote to my parents, a friend I wrote to in England (friend from Ireland 1983-`1985)  She was English moved back there and I wrote her voraciously until she died.  Her daughter mailed me all the letters I had sent her mom.  They are a part of my history I couldn’t have recreated from memory.

from Emmett: And I have a comment about the Garrison Dam.  It robbed North Dakota of some of its most productive farmland, and hence statements of future irrigation were all political.  The real purpose of the dam was to hold back waters to minimize downstream flooding of the Missouri/Mississippi Rivers.  Those southern states had much greater political power than us North Dakota folks.

Dick, the reason that nothing ever happened in the way of future irrigation is because it was never intended,  and you can read all the books in the world, and it won’t change the facts.  As a long-time scientist, I tend to be leery of much that I read because I cannot always determine the true objectives of the authors.  Are they trying to influence their readers for political purposes, or are they just parroting something they have heard or read, or … who knows what????  I recall a situation where the Air Force Research Lab in Dayton, OH spent about $3 million to disprove a position paper that was written by a Stanford University professor for the purpose of promoting their university.  So read, but beware of what you believe.

Response from Dick: We have nothing to disagree about.  The below photo from Rich sort of says it all.  It must have been the then-Governor of ND signing the paper (Fred Aandahl?).  What seems to be the definitive history of North Dakota (Elwyn Robinson 1966 pp 461-66) seems to agree with your political conclusion.

You and I worked in different arenas with different criteria.  My job for virtually my whole career was to try to sort out some reasonable facsimile of fact among assorted opinions on matters  from petty to pretty profound; from individual differences to organizational and larger political controversies.  There is always truth in there somewhere, even if only fragments!

I once heard a talk on the concept of “power” which I felt was pretty profound. The speaker talked about various sources of power, such as who controls your job, or your money or what have you.  The greatest power, he said, was what he called ‘referent power’ – the likability factor.  It made sense to me, in the context that I was then-working.  More recently that has been turned on its head, too.  The previous President (whose name I will not use) is like a pied piper to his reverent flock, the powerless.  Makes no difference that he gives not a damn about them; they still revere him….  So, back to the drawing board.   I actually did a blog about this once.  Here’s the link, from 2011. 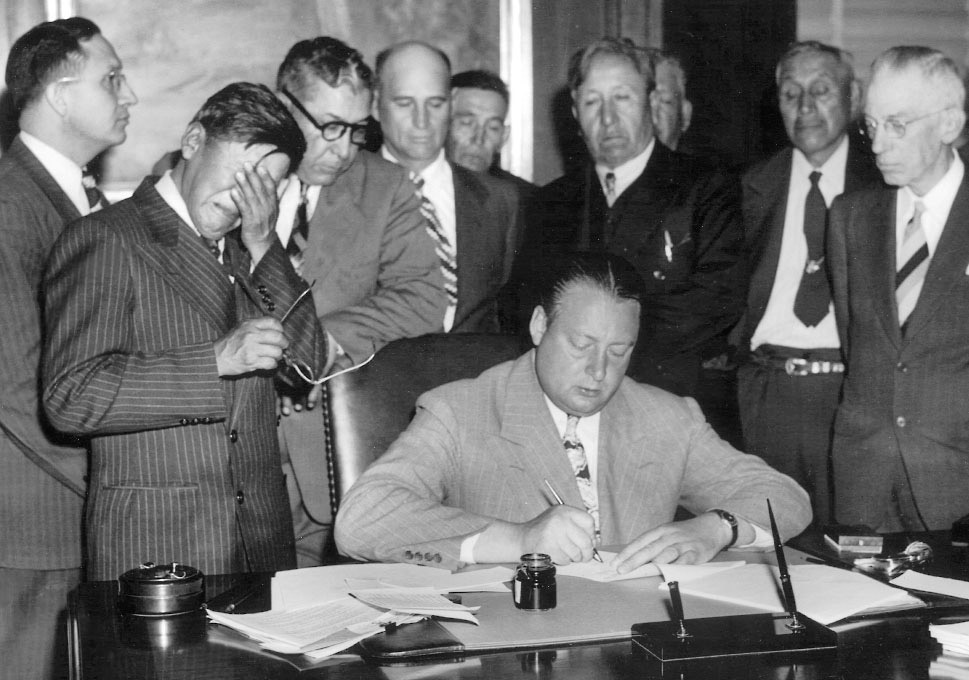 George Gillette, second from left, chairman of Three Affiliated Tribes of North Dakota, and other tribal officials at the 1948 signing of the Garrison Dam agreement.
Dick,
As a North Dakota native, when I think of Garrison Dam relocation this photograph is most poignant.
Rich