PRE-NOTE: I’m composing and completing this on Thursday afternoon, October 28, 2021.  As I write, the endless chatter is about whether or not or how much or who will make the President Biden package succeed or fail…while President Biden is enroute to Glasgow for CAP26.  When I click publish on this, I won’t know what decision is finally reached.  What I will be thinking about is the woman I mention at the beginning of my next post, at this point unpublished, but scheduled probably for Saturday morning.

Today is a retrospective and political reflection, for whatever its worth.  We, all of us, are “politics”.  We deserve credit…or blame…for anything that happens because of actions we take on our watch.  There have been many on-watch before us.  This comments on two of these people.

October 17, I watched an excellent Sixty Minutes segment featuring Robert Gates, powerful insider and career – dare I say? – ‘bureaucrat’ who at one time or another advised eight U.S. Presidents.  This would go back to Reagan.

The following morning the news came that Colin Powell had died.  Powell’s career went back to before Vietnam, well over 50 years.

There is abundant information readily available about two men and thus I’ll not go into that at all.  Personally I had positive feelings about both men, as true leaders.

Both men, indeed all leaders of whatever gender, local, state or national or international, are subject to being ‘lightning rods’ for most everyone, makes no difference if the reaction is positive or negative to whatever it is that the leader has led on.

Back in the distant past, one year ago, I came across a lawn sign in Minneapolis that pretty well spoke my personal truth about leadership.  It speaks volumes for itself. 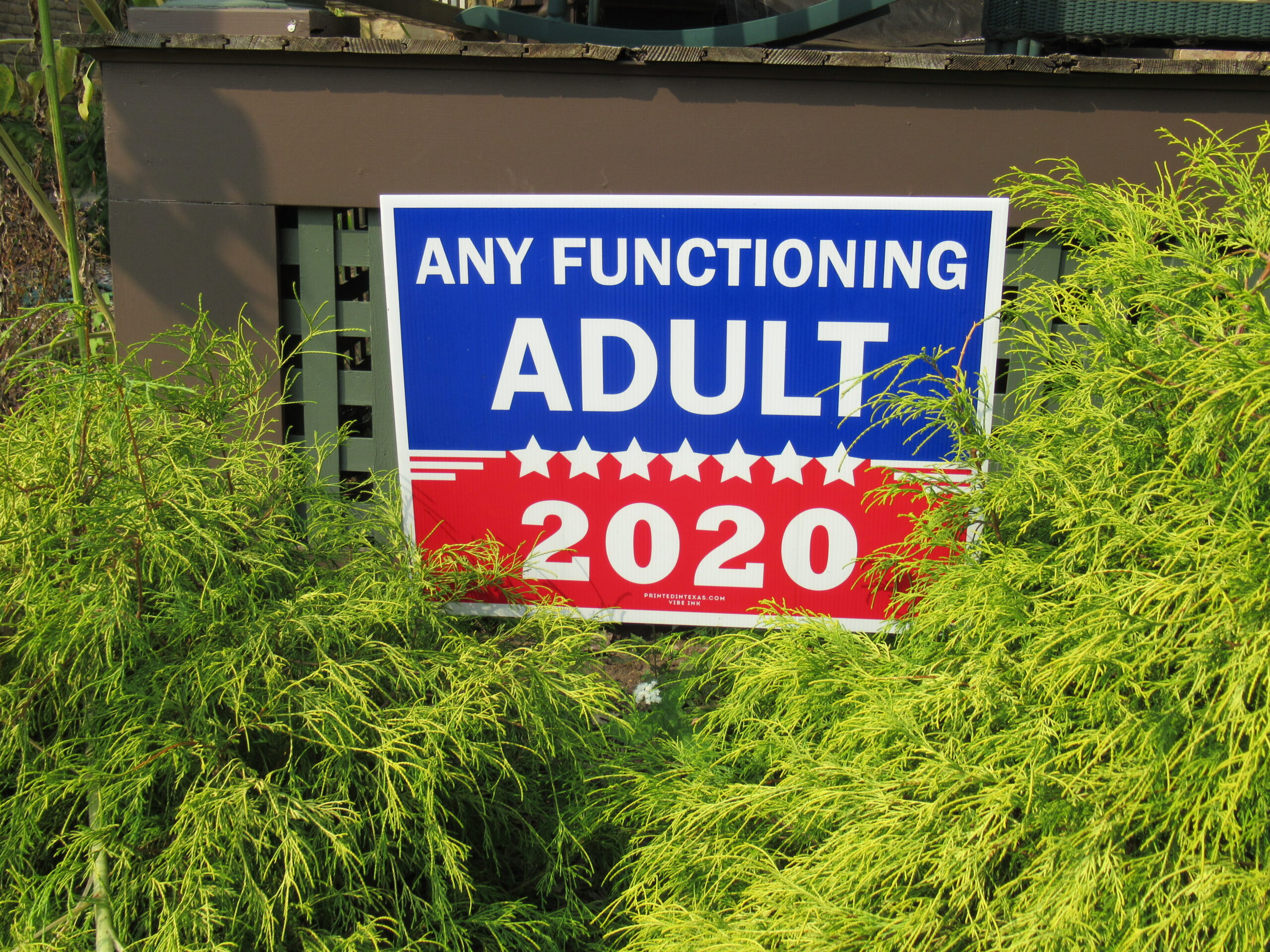 People like Colin Powell and Robert Gates, and many, many others, fit this lawn sign to a tee.  They were people who had to make decisions that were always wrong to some, right to others, neutral to still others.  Somebody had to decide.  They made mistakes, and they even were willing to acknowledge that their decisions might not have been correct.

This morning I was noticing at my coffee place that there were perhaps 20 of us there with me, most patrons, a few others, staff.

I could say, honestly, that I actually ‘knew’ only one of those 20 people, and that person only in the very limited context of the coffee shop.  I thought to myself, what would happen if something happened in or around our mutual space that required a decision.  If it had to be an instant decision, someone would likely take the lead, and the rest would follow, no consideration of second guessing later.  Pick your issue, pick your leader.  Afterwards decisions will be made about wisdom or lack of the leader in dealing with the crisis.

Then expand this to the huge kinds of issues that we constantly ‘grade’ our leaders on.

In my youth, President Harry Truman had to make the decision about whether or not to drop the A-bombs on Hiroshima and Nagasaki.  It is a decision that will forever be second-guessed.  It is my understanding that when Truman ascended to the Presidency at the death of Franklin Roosevelt, that he wasn’t even fully aware that the bombs were ready to go, or perhaps, even, that they were being developed.   This was in April, 1945,  Hiroshima was bombed August 6, Nagasaki on August 9, 1945.  Germany surrendered in May, 1945.  Truman got the credit…and the blame, it seems.

I cannot conceive of the stress placed on Harry Truman at that point in his “The Buck Stops Here” administration.  He had to be the functioning adult in the room, and part of that was to take the shots afterwards, from the people who had their own feelings and their own agendas.

In the end analysis, we, the people, are always the one who have the responsibility for the decision makers we elect.  As long as we are a democracy (and that is in question, now, in our country), every one of us who votes (or does not vote at all) for any and all offices share the credit or the blame for a society which works, or not.

We need to take sides.  Colin Powell and Robert Gates were, in my opinion, positive leaders.  People whose example is good to learn from.  They showed up.

Women Voting…Reflecting on Haiti and US.
Scroll to top