All best wishes on Father’s Day. Today, as our Pastor acknowledged and affirmed at Mass, “Father” is a borderless term.

Today, a few words on my biological Grandpa, Ferdinand W. Busch, who I knew for 27 years of my life. No need for many details. Hopefully I’ll encourage some of your own memories of some Dad in your own life. 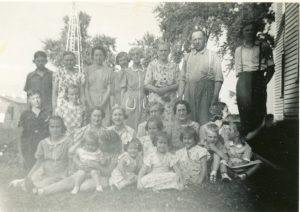 Near Dubuque IA Summer of 1941

Grandpa comes to mind because of the above photo, which I came across in a large collection of old farm photos which I have been working on identifying and classifying since my Uncle Vince died.

The photo was taken at a specific farm in southwest Wisconsin in June, 1941. Grandpa is one of the two men at right in the photo. The other is Uncle Vincent, then 16, who (very likely) quite proudly drove the near six hundred miles of this trip. Now, that 1940 Shell Oil road map for Iowa which was in the residue of the old farm desk makes sense to me.

Long trips were not the norm back then.

A short time ago I used the U.S. map in that map in another blog. It seems a good time to use it again. 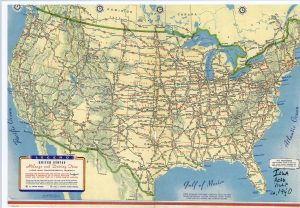 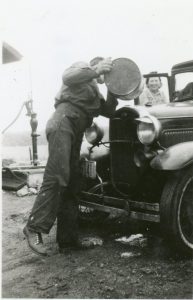 Filling the radiator with water before leaving home.

But, back to the photo. My Grandma Rosa Busch is behind the sad looking lady in the white-fringed dress; next to her is her daughter, my Aunt Edithe. The adult women are all Grandma’s sisters…in her large family of origin there was only one brother, and apparently he was not on this trip.

There were 13 siblings in Grandma’s family of origin. Eleven were girls.

The first four kids for Grandma and Grandpa were girls, six of the nine total.

I’ve done family history for years. This is not a festive occasion for a family gathering.

The lady in the white-fringed dress, the likely object of the visit, died about a year later, and, I think, she and all knew that she would be dying a difficult death.

She had been stricken with what they used to call Lou Gehrig’s Disease, what now is commonly referred to as ALS. In this photo she was 59, a year younger than Grandpa.

She had been Maid of Honor for her sister when Grandma and Grandpa got married in 1905. All the girls grew up in the house at the right in the photograph. The lady in the white-fringed dress still lived there.

Grandpa had grown up walking distance across farm fields from this same farm.

This farmyard was very familiar territory for everyone.

Life takes its course for all of us, as we know. Personally, I think it best that we don’t know the specific twists and turns ahead – better surprised than worry yourself to death!

All of the elders in the photo are long gone; probably most of those little kids in the picture as well.

We all have our stories. Grandma and Grandpa had theirs. Vince and Edithe (neither ever married) had theirs too, from numerous encounters with we youngsters from their siblings families.

Here’s to you own memories, most of whom are, I hope, good!

COMMENTS
from Annelee: Dick, thanks for the memories of Father’s Day and times past.

I never knew either of my grandpas as you know, both died before I was born.

But I do remember my papa. Wish now that just once I could have said how much I loved him, and could have thanked him for guiding me along to the roads of my youth. The war took him and many young fathers before they could watch their children as they remembered and used what their papas had told them.

It was Papa who taught me about not hating anyone. When I told him that I had heard in school that we should hate the Jews, he said, “Anneliese, I will NOT hear the word hate in our home. And don’t you ever hate anyone. You may not like what he/she does, but don’t ever hate because hate makes you a lesser person than the person you hate. “

About lying he said. “Don’t lie, tell the truth: You see, when you tell one lie, you will always have to tell another lie. Soon the lies own you and only the truth will set you free.”

About making mistakes: “Anneliese, I accept it when you make a mistake, we all do, believe me I have made mistakes too. What is important, is the fact that you must learn from your mistakes and not repeat them..
Otherwise you will have problems. No one will believe or trust you again.”

“Respect is not something you are born with. You must be kind and respect others who may not live like we do. But if they work hard and try to do right, they are good people and they will
in return, respect you.”

“When I questioned why I should have to go to church every Sunday to make it into heaven. Papa said, “Faith in God is not black and white. You may not understand it, but you should believe.”

As I entered school and advanced, PAPA always reminded me, “Anneliese, learn all you can and then some more.”

When I asked him “Why should I learn more than my friends? Why I should travel to Waldsassen on Saturdays to take typing and shorthand?” He patiently explained. “Anneliese, I want to give you a better change than I had. You see, times are getting hard. If you will have to work, and you have better knowledge than someone who applies for the same job, most likely, you will be hired. So you will do as I say, and that is that.”

Because of my knowledge of typing which was Not offered in school, I was hired as a telegraph operator instead of having to join the German Arbeitsdienst.

Oh, how did I get on that, Annelee

from Jermitt: Wonderful Blog. I enjoyed your story and pictures, and Annelee’s message as well.