Personal opinion, hopefully leading to your own individual thinking about our future as a nation.  The purpose of this is to encourage conversation wherever you are.  Related, Jan. 6.

Two articles, one in the New York Times on Sep 8, 2021,  the the other  in The Washington Post on Jan. 9, deserve reading, though both would require you to be subscribers (which I recommend).

The NYT post is a very interesting opportunity to self-assess your own political philosophy as compared to a half-dozen ideologies, not Democrat or Republican, etc.  Not surprising to me is that I profile with “New Liberals”, which are about 26% of the population.  I filled out the questionnaire also as if I were most conservative in answering all questions.  This group is 20% and called “Christian Conservatives”.

Most of my life was and has been involved with organizations, mostly small.   I am by no means unique.  Human beings generally seem to arrange themselves into hierarchies, where someone is titled with being in charge.  I think this relates to other groups as well – human tend to sort of a herd mentality.

In the part of my career representing teachers, I was privileged to learn from a well known systems guy, Patrick Dolan.  His standard teaching tool is represented by this artistic newsprint about systems, basically bunches of pyramids.  If you’re reading this, you understand this.  (Clicking his name links to a very interesting 6 minute segment on his philosophy.  He made sense.) 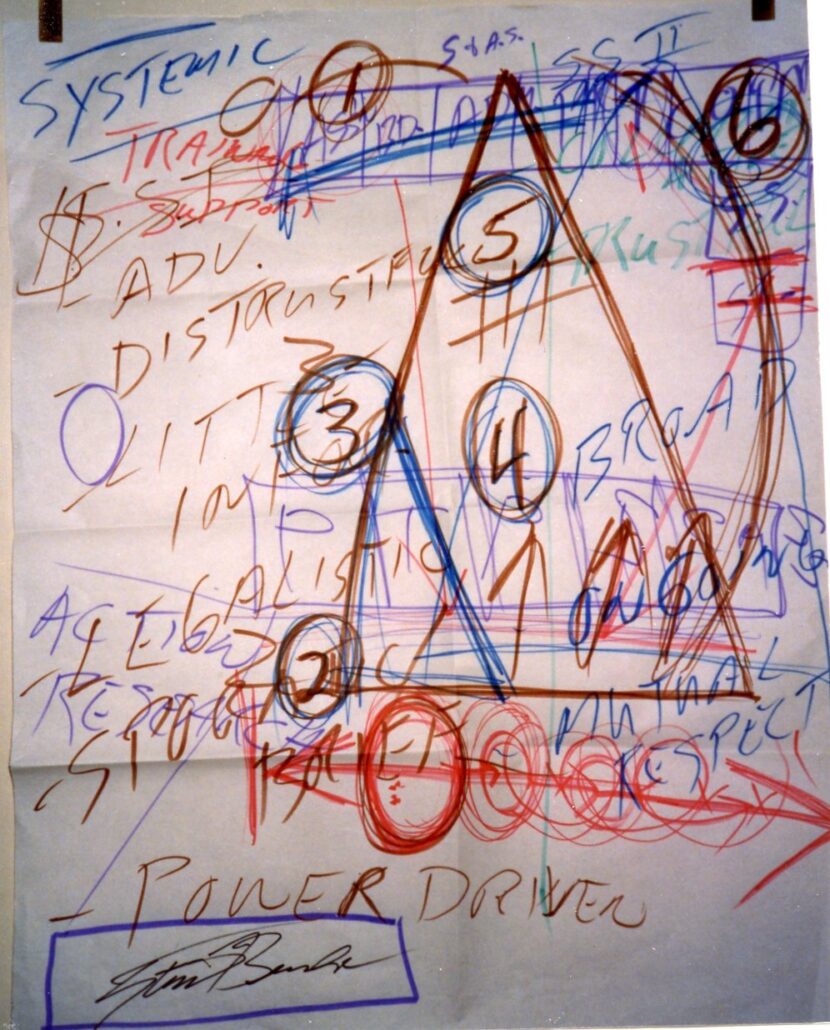 My very simple personal spin on Politics is this.  Politics Is People, Period.  For good or ill, people select and then tolerate, or not, their leaders.  Pretenders to leadership understand Power, and how it works.  Carelessness (lack of care) in selecting leaders at any level in any democracy of any kind is very, very dangerous.

A Prudent Person pays very close attention to who he or she anoints to leadership, from the smallest to the largest unit of formal or informal government.

The Nazis and Hitler understood Power.  Presumably so did the German people, who numbered about 80 million at the time of the Third Reich.  The people made a monumental miscalculation, with ultimately dire consequences.  I wrote about this in the January 6 blog.  Power is fleeting

We live within a similar dynamic today.  The WaPo list is very illustrative.  There are nearly 40 people on the list of key actors before and after the 2020 election.  They nearly succeeded in overturning the government of our 330,000,000 population country.

I think the Nazi analogy is very appropriate and very timely for us in 2022.  Those who attacked the Capitol on Jan. 6, 2021, were little fish, duped into the attack by the cabal listed below.

After WWII, the little fish were of no particular interest to the prosecutors at Nuremberg.  They went home to try to rebuild their lives.  The targets at Nuremberg were the big fish, similar to the ones below.

There are many variables, unknown to myself or any of us at this point in time – things that mitigate for or against severe penalties for the offenders, especially high level.  This is a long-term process.  We are fools to pay the most attention to the devils who attempted to overrun the Capitol.  They were the symptoms of the real disease which was being nurtured by the people listed below.  They were the pawns for the real criminals.

In the end analysis, however, we the people are either the ones who will chose a better fate, or acquiesce to a divided, tribal  and authoritarian system.

Like Joni Mitchell’s iconic Big Yellow Taxi song,  “you don’t know what you’ve got till its gone.”

Personally the danger I see in the current political division in this country is the very clear intention of one ‘tribe’, the current Republican Party leadership, asserting its intention to dominate and control all aspects of society through the legislative and legal system.  The current Democratic party’s dilemma is that it needs to work with and understand numerous diverse perspectives.  The Pat Dolan segment linked above gives some good insights in its 6 minutes.  It is not about politics, rather about systems, generally.  It is an opportunity to learn.

The hierarchy of the Insurrection Jan. 6, 2021 per WaPo

The departing, now ex-President of the United States