PRE-NOTE: What is North Dakota about?  This year you have the advantage of a new book which I’ve publicized at this space two or three times, and continue to highly recommend:  ” Clay Jenkinson’s “The Language of Cottonwoods.  Essays on the Future of North Dakota”.   There are many reviews.  Here’s the Table of Contents: Jenkinson Lang Ctnwoods Contents.   Whatever your connection with the state, if you’re at all interested, read this book.

Most of last week I spent in North Dakota.  It was not a secret trip.  Friend Jane, in California wrote: “North Dakota?  Sooo jealous.  The only state I haven’t visited yet.  Plan to go next summer, hopefully even get to Standing Rock.”

Having grown up in ND, in many towns, and an almost annual visitor there, I can speak with some authority about the prairie state.   The book I recommend at the beginning of this post will do a much better job than my scribbles in defining present day North Dakota.

North Dakota is a pretty normal place with its pluses and minuses, as is true everywhere.  I could make lists.  No need.  Suffice, we’re a nation that defines others by labels and extremes.  We’re mostly just folks: think of yourself and the people you know, personally.  Then think of what leads the news, regardless of the medium; the latest of anything that brings the outside world to your attention….

Below is my  2022 ND road map.  It seems a better visual than assorted random photos between Fargo and Bismarck.   Generally, had you been along, you’d have seen lots of green and open farm area, interspersed with tiny towns, mostly, along the mainline of the old Northern Pacific railroad and U.S. Highway 10.  Of course, the interstates intentionally by-passed the small towns everywhere, which didn’t help the local economy, but so goes progress

The weather was magnificent summer weather.  I travelled in the southeast quadrant: I-94 and a little south, as far west as the Missouri River.

There was a relatively small amount of summer road construction on I-94.  75 is the legal speed limit in ND. Bismarck to St. Paul is about the same distance as from St. Paul to Chicago…400+ miles.   It was a hike for someone my age, alone.

Fargo-Moorhead on the east border is the Prairie metropolis, truly.  Still, the centerpiece artifact at the Fargo visitor center is the woodchipper made famous in the Coen Brothers movie, “Fargo”, which really had nothing much to do with Fargo or North Dakota, but both added to the marketing appeal of the film.  Stereotyping?  Sure, but you take what publicity you can get.  As the quotation attributed to someone(s) goes:  “I don’t care what they say about me, just spell my name right.” 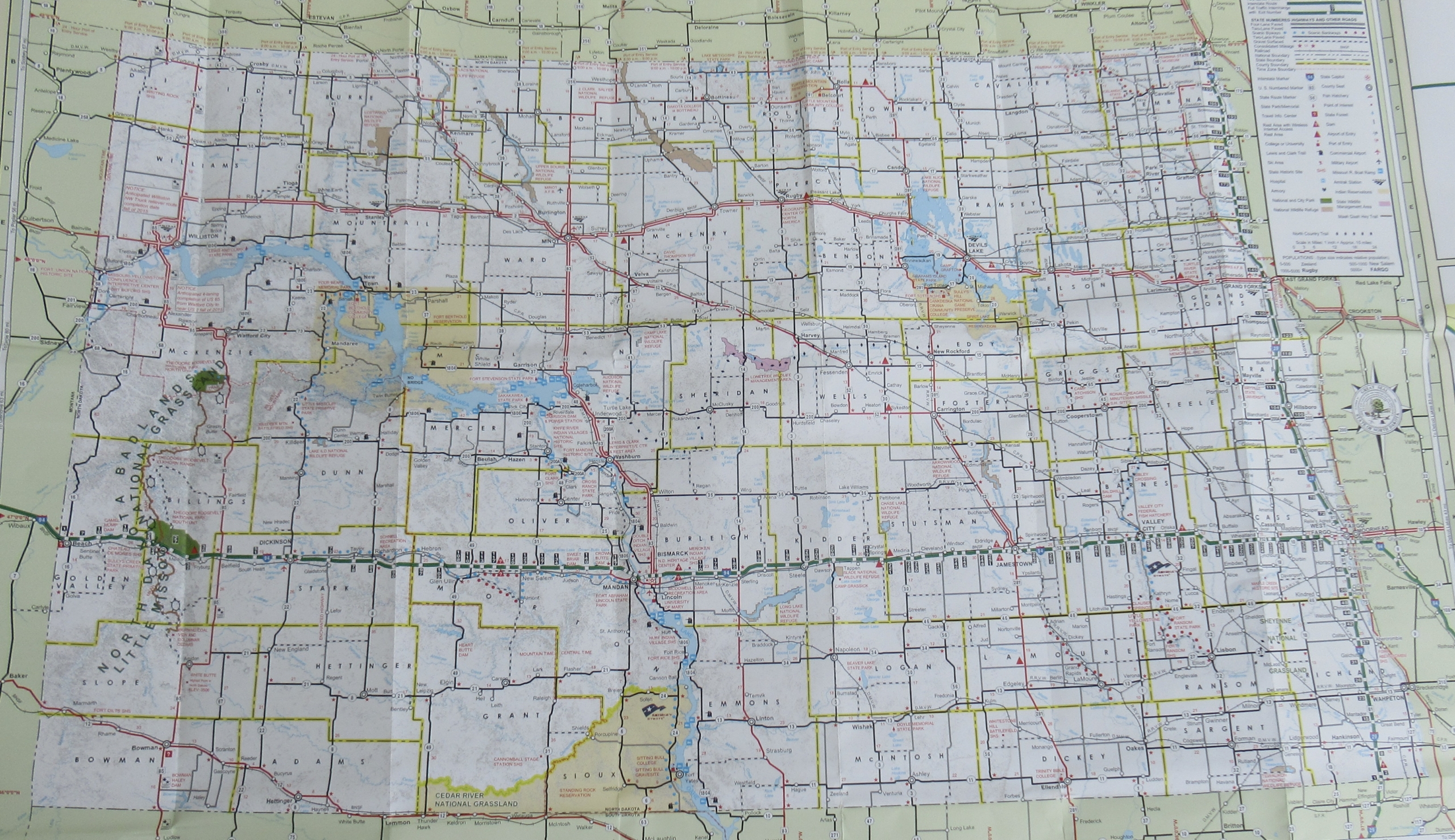 My first stop in N. Dakota, and my first visit, was with my friend, Larry, in Fargo on July 5.  I told him about Jane’s comment (above), and said I’d like to take a photo of a real North Dakota ‘hayseed’, and he was more than happy to oblige (more at the end of the post about him).  He’s lifelong NoDakker, escapes the bounds of the state now and then, but always returns.  He’s the real deal! 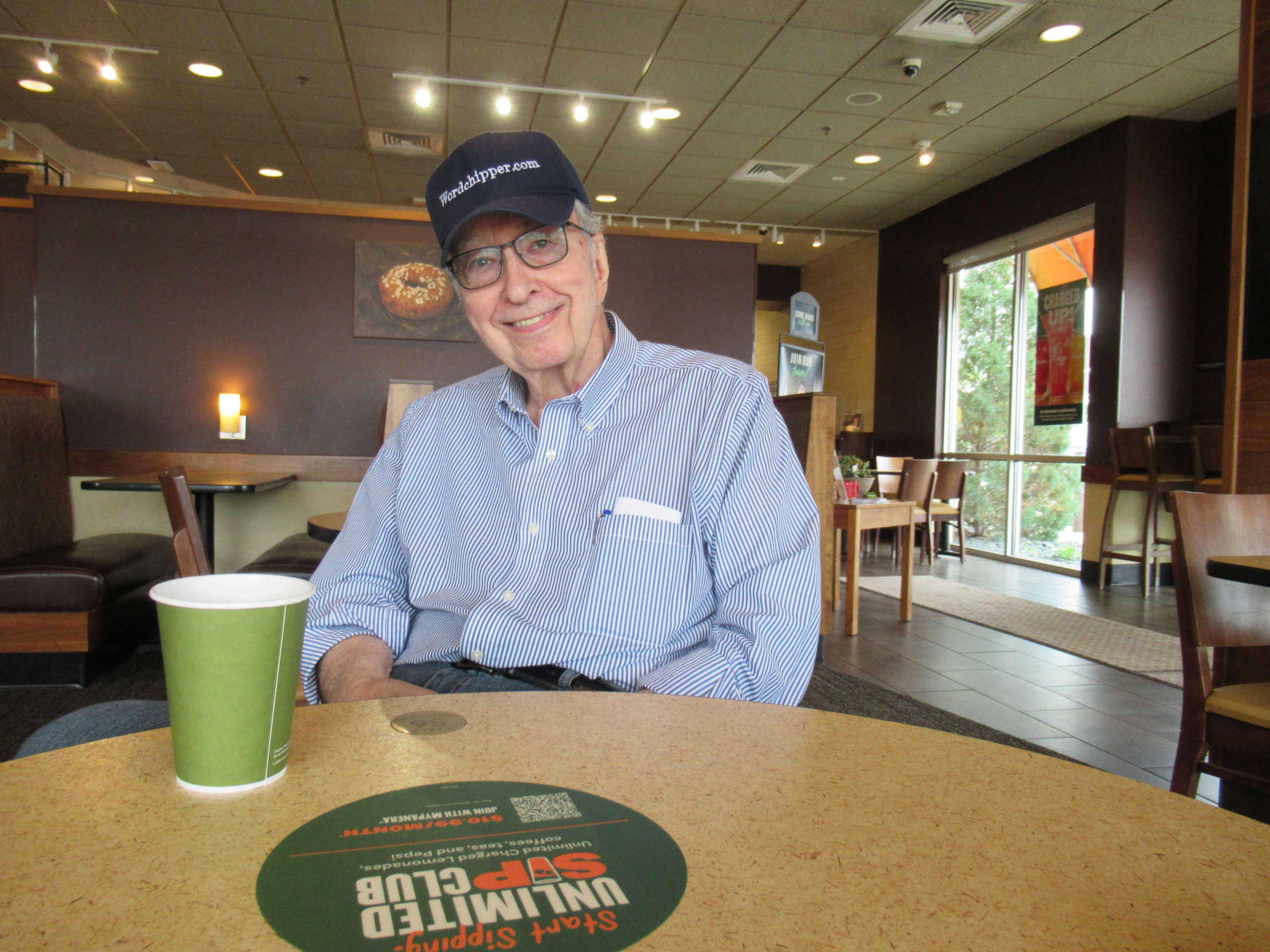 Jane isn’t the first to have told me that ND has never been their destination.  We have some kind of reputation, I guess.

I thought about Eric Sevareid’s famous commentary in Colliers Magazine in 1956.  He was born and raised in Velva, not far from Minot and Karlsruhe (where I lived 1951-53).  “You can go home again” was the headline.  Between his growing up in Velva (1912-25), and the 1956 commentary, Eric had become a celebrity to those in my generation.  He only lived a while in Velva as a youngster, but in a sense he never left.

There was a time when I would hesitate to say I was from North Dakota.  That reticence is long past.  I’m proud I grew up there, and in a larger sense, I’ll never really leave, though I’m more than 57 years out of state, most of that a ‘city slicker’ in metro Twin Cities Minnesota.

North Dakota is a pleasant place to visit, Larry and others make it so.  For me, “others” this year meant 10 folks I know.  My particular business this year focused on the State archives in Bismarck where my family has a presence (collection 11082).  I’ve gone back to the archives about once a year or so, usually for a couple of days.  Enroute out and home, I enjoy my state and I visit. This year was no different.

What about Larry (picture above)?

I’ve known Larry G for over 60 years.  When I was in college, he was a high school classmate of my future wife.  I didn’t know him then, except that he was the announcer with a superb radio voice on local radio, KOVC in Valley City.

I didn’t know he was a high school kid.

He went on to success in other areas, and in retirement he blogs as I do.  His turf is HERE.    I think you will like his content.  His information is shared with his permission.   Take a look.  Pieces about Garrison Keillor, Louis L’Amour, “Fargo”, Bobby Vee….

One of my destinations last week came via a tip from him as we conversed.

Oldtimers will remember renowned singer Peggy Lee, who started life as Norma Egstrom of Jamestown ND [July 13: as my college roommate Richard reminds me, below, she actually grew up in tiny Wimbledon ND].   Turns out that she did her first live radio gig probably in the same KOVC studio where Larry Gauper did his announcing.

He told me about a mural on the side of the building that was the radio station and I stopped to see it.  Sure enough, there it is: 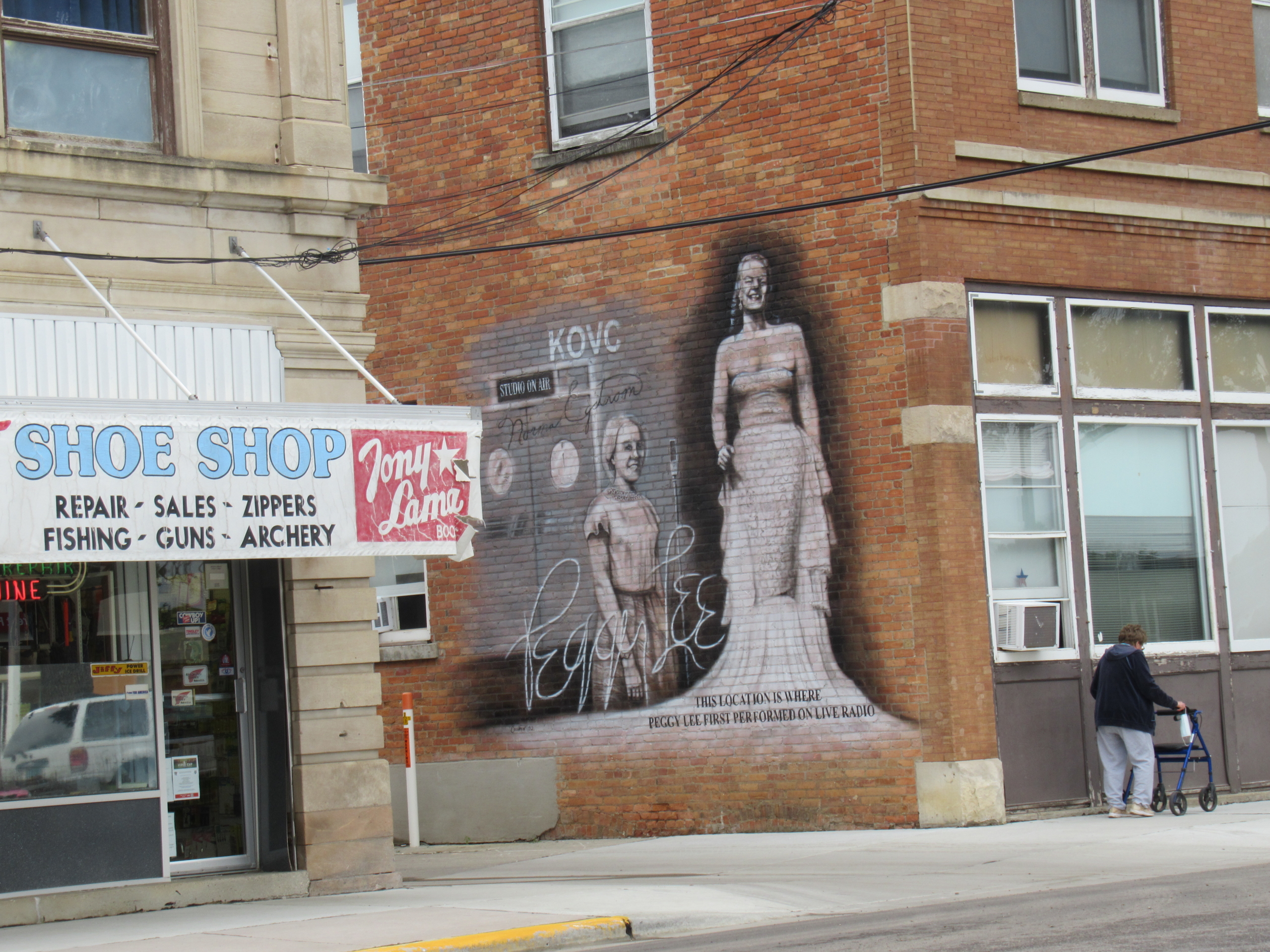 The stories go on and on.  If you have the chance to go to North Dakota, go.  You won’t regret it.

And pick up Clay Jenkinson’s book on the Future of North Dakota, “The Language of Cottonwoods”. 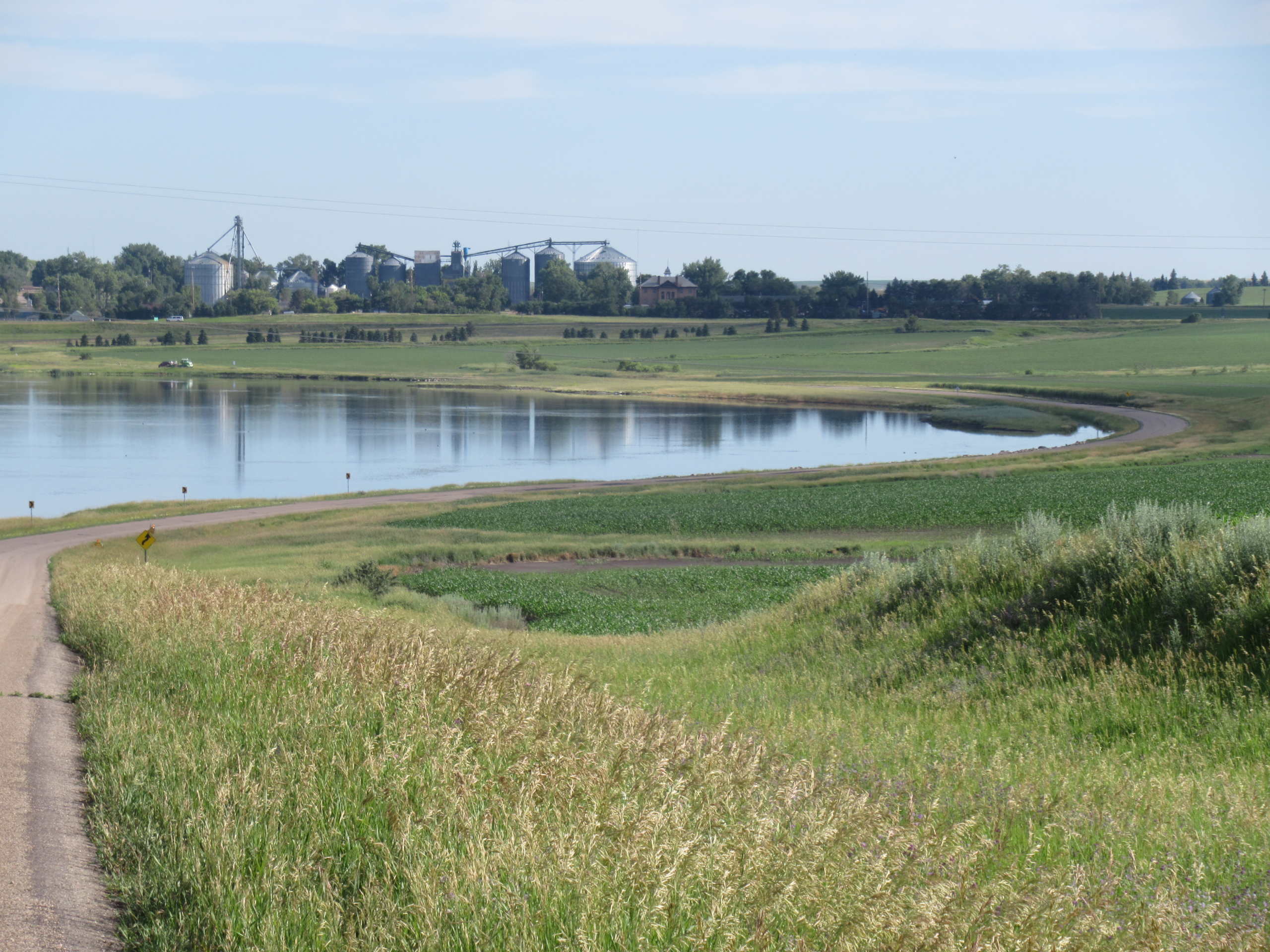 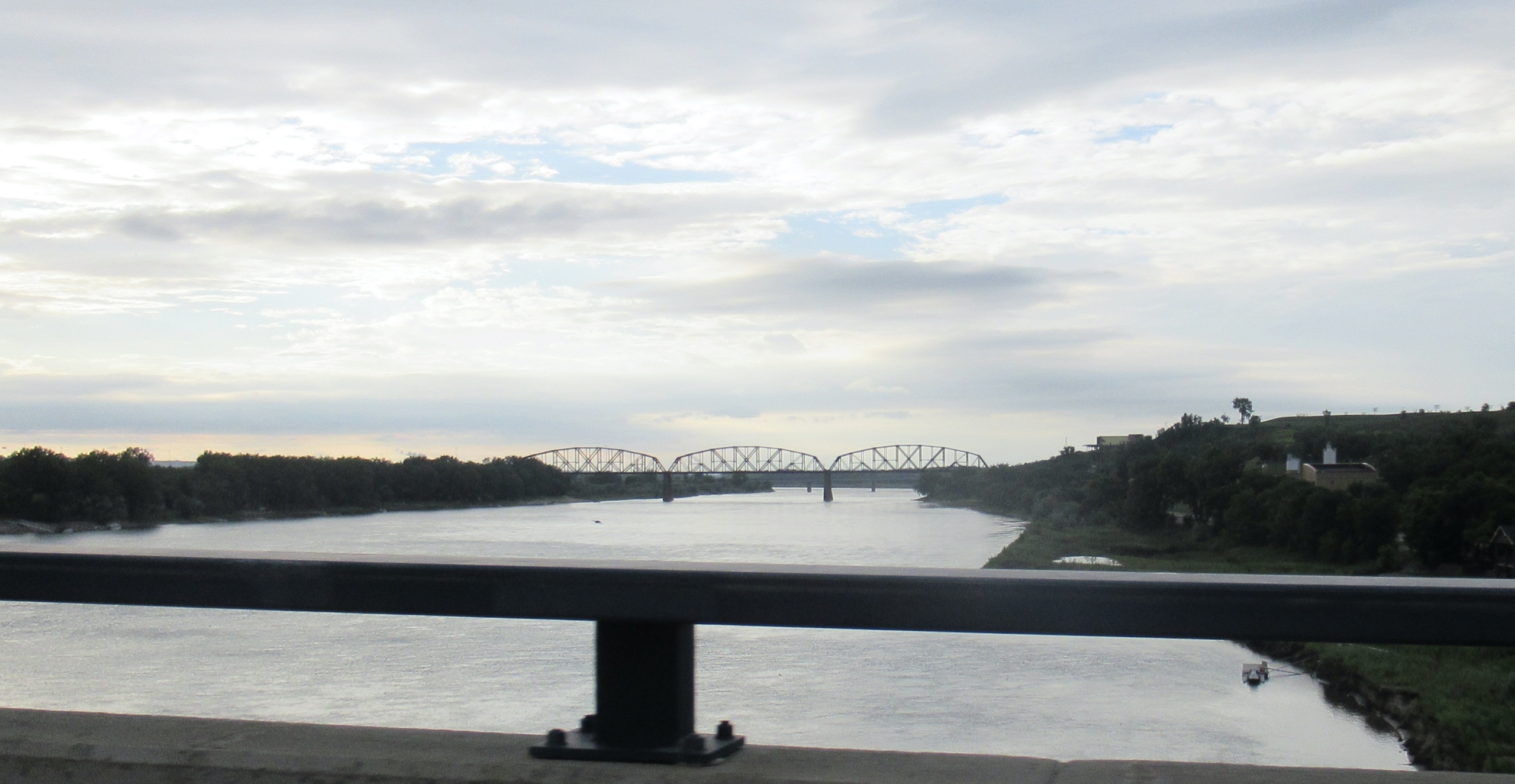 from Mark: Not So Wild a Dream  is one of Eric [Sevareid]’s best pieces of writing about our region.

from Debbie: Thanks for this, Dick.  I taught music in South Dakota on a Sioux reservation and would often go home with one of the teachers from North Dakota – Buffalo.  People there LOVED N. Dakota and called it God’s Country.

I think Lawrence Welk is from there too!  I drove through his home town once.
Unlike your friend Jane, I’ve been to all the states but Oklahoma.
*

from Fred:  My take away from your ND travelogue: Peggy Lee was born in North Dakota??!! That is something of which to be proud.

Actually, your journey sounded pretty interesting. But that’s coming from a big city guy from Red Wing, so what do I know?
*

from Jeff: Thanks Monsieur Bernard….I miss my several times a year visits to Fargo/Wahpeton/Breckenridge, and other points west, north and south in Nodak. I still vividly remember driving east on ND15 I think , between Northwood and Thompson, and a storm came in behind me from the west and I was watching a tornado move to my south maybe 2 miles away just moving along for about 3-4 minutes west to east before dying out….

It really is an interesting state…but the winds in the winter…uff dah.
Dick’s response: The wind is to keep the riff-raff out…!
*
from Rich: So we are fellow “No Daks” … I had to learn the song below in Miss McGraith’s fifth grade classroom in Minot. (Ironically, this is the NDSU choir … from the alma mater of Bill Haring.) As for me, Minot was a great place to grow up … Nestled in a river valley, 50 miles from Canada, it had some interesting history that caused it to be known by some as “little Chicago.” during prohibition.
from Dick: Rich provides a Facebook link to an article for those of you who do Facebook, here.
*

from Mary:  I think all ‘Bernard Kids’ get to be unofficial ambassadors of North Dakota!  Many versions and many memories.  I am sure I have told you of attending a function where a local well-heeled traveler bragged of having visited “all 49″ states.  Of course I asked which one she had not visited and got a hoity toity response…”well, North Dakota, but why would anyone go there!”   Another time I was ushering and a fellow usher was so intrigued with my home state connections that I became an immediate ’cause celeb’!  She brought friends to see me in the flesh and was genuinely thrilled with her find!

The Fourth of July Hubris
Scroll to top