It’s Valentine’s Day, and today I’m remembering my friend, Lynn Elling, who died one year ago today, a few days short of 95 years. He was a remarkable guy. He walked the talk about Peace. I was honored to talk about him at his Memorial Service on May 1, last year. I wrote a bit about him then. You can read it here, “In praise of exasperating people”.
The 1971 Declaration of World Citizenship
Click to enlarge, twice to double the enlargement 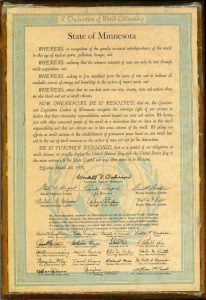 Last spring, after Lynn died, the family invited me to go through the residue of his long life which related to his passion, the quest for world peace. He gave “World Peace” a great run, leaving a substantial base – and a challenge – for the rest of us. Down in our garage is a single box with many remnants of over 70 years passion for Peace, which began, for him, as a young Naval officer viewing the aftermath of the awful battle at Tarawa Beach in the Pacific, November, 1943.
A truly major accomplishment from that box is shown above, from March of 1971, and I’d invite you to take the time to really look at not only the text of that Declaration of World Citizenship, but to carefully study the list of signers who, at the time, represented all of the major leaders in Minnesota, Republican, Democrat, Civic…..
Out of this accomplishment came a 30 minute film, “Man’s Next Giant Leap”, which is worth watching on line, here.
Lynn was 50 years old when that Declaration was signed. Two years previous had come a similar Declaration for the City of Minneapolis and Hennepin County; and six years earlier a similar declaration for the United States of America.
The idea of Peace was catching on.
And on and on.
In about two months, in Minneapolis, a new film, The World Is My Country, will be shown at the Film Society of Minneapolis-St. Paul about Garry Davis, another remarkable man, and friend of Lynn’s, who began a world wide campaign for the concept of World Citizenship. When I know details I’ll announce them in this space.
On May 1, at Gandhi Mahal in Minneapolis, we’ll celebrate another creation of Lynn and others: World Law Day, which first was held in 1964, went on for years, and after a hiatus, this year will be the 5th in the most recent series. More on that event, featuring Shawn Otto of ScienceDebate.org later as well.
Yes, Lynn Elling could be “exasperating”.
But it is “exasperating” people that are very often the ones who make the difference; the people who go beyond the bounds of “average and ordinary”. We all can learn from being “exasperating” ourselves, from time to time!
Have a great Valentine’s Day.
POSTNOTE: Another great accomplishment by Mr. Elling came May 1, 1968, when the United Nations Flag was mounted beside the U.S. flag at what is now the Hennepin County Government Center Plaza. The flag flew there until late March, 2012, when it was removed. More can be read here. This, too, was a completely bi-partisan initiative. Elling was a downtown Minneapolis businessman, working with others in the business community. The UN, then, was not considered as some enemy of the United States, as some have come to portray it in more recent years.
Related, Feb. 13, 2017, here.