If you’ve read this far, you know the name “Kavanaugh” and have an opinion.  A personal observation: 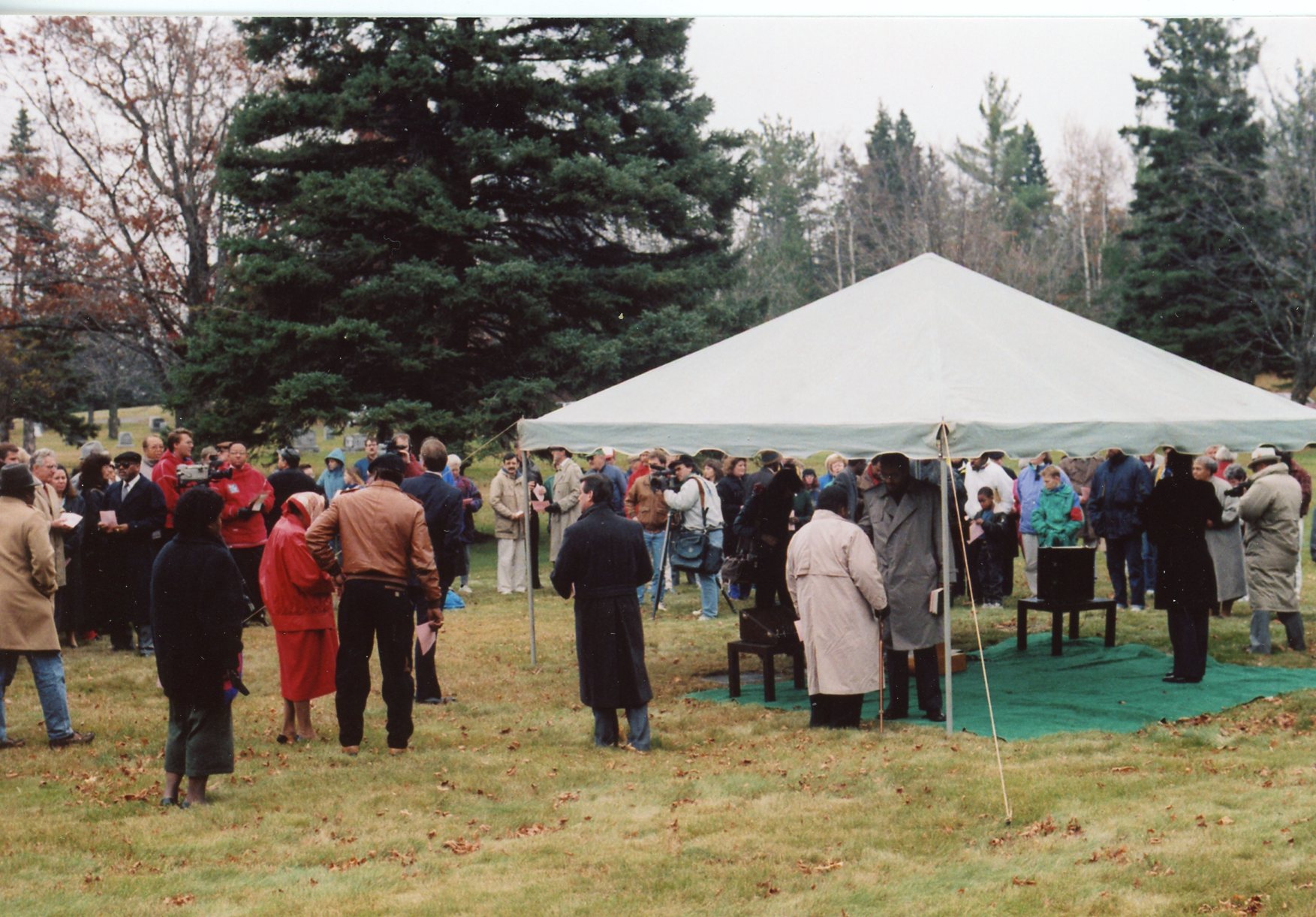 October 26, 1991 – it was five days before the Halloween Blizzard – found me at a cemetery in Duluth MN, attending a very moving event commemorating the death of three men who had been lynched in downtown Duluth in 1920 and had been buried in unmarked and long unknown graves at the cemetery.  (The graves are beneath the tent in the above photo.)

All of the circumstances of this long ago lynching can be read at the Minnesota Historical Society website, here.  “Kavanaugh” brought this long ago memory to the surface for me.

I hope you take the time to  read the timeline, and consider it in context with current events in our nations Capitol.

“Kavanaugh” and “Duluth 1920” are, in many ways, similar, but can also be viewed in many ways, depending on how one chooses to interpret them.

In my opinion, “Kavanaugh” and “Duluth 1920” are all about “Justice.  Judging.  Judge” – or lack of same – as viewed by our far from ideal society.  “Kavanaugh” will be a demonstration of how much America has changed – or not – in the last 100 years and more.

I submitted a brief letter to the editor of the Minneapolis paper on this issue on Monday.  It has not been printed.  My letter, too, can be open to interpretation.

The letter will probably not see the light of day.  Here it is, if you wish.  The referenced Rachel Moran column is well worth your time.

October 26, 1991, I was privileged to be part of a small group of citizens who gathered at Park Hill Cemetery in Duluth to recognize three black men, buried in unmarked graves, who had died June 15, 1920, lynched at the hands of a mob in downtown Duluth.
The allegation: the assault of a white woman by the three negroes.  (all details here.)  From the Minnesota Historical Society files: “It would later prove to be an unlikely story. Compelling evidence asserted no rape ever took place.”  A mob ruled.
Rachel Moran fills in some crucial blanks for readers about how life is today for others less privileged.
One wonders what the narrative would be if all the facts and allegations as currently exist in Kavanaugh were identical, except for the color of the skin and the social status of the males involved.”

POSTNOTE: My previous commentary on this topic is here.

from Lois: Random thoughts in response to your blog:

One of the first things we heard was regarding support of Kavanaugh by the two political parties, for the most part by party lines which revealed a type of mob behavior.   The same type of analysis seems to be the norm now that the accusation of alleged attempted rape has been made.    This all brings me back to recalling my teenage years, the action of us at parties and on dates – the peer pressure, etc.  and I wonder how much value should be placed on teenage behavior vs. accomplishments of people once the maturity of the 20’s is reached.

Premeditation seems to be lacking in a lot of crimminal judgements, just as it is of intended vote for or against Kavanaugh before the hearings.

I cannot think of any other event in the past that has brought so many issues to be thought about than the Kavanaugh nomination.

This has led me to find info (link below) about what the bible comments are on the subject.  I also thought if any member of Congress is under the same scrutiny and without sin as our Supreme Court justice nominees are, who are only expected to judge on the laws that Congress passes – good, bad or indifferent.

Thank you for sharing the article

from Bill: I am amazed at your blindness!!!  How can Obama  go down as the greatest President??  He appointed Crooked Hillary as head of State Dept.  They corrupted the FBI: CIA and Dept. of Justice!!    America was very close to Monarchy!!!  But,   GOD stepped in and changed minds of people to vote for TRUMP!!            GOD IS TRUTH!!  You need to open the BIBLE and find out what is TRUTH!!  Your day and my day will come before we stand before GOD and answer to our sins!! You  and I are responsible for how we treat our neighbors and who we support in elections.  If, you and I support immoral candidates who have no conscience and support to kill innocent babies—-we are responsible for that vote!!!  God will hold us accountable!!  What did you and I do to prevent such killings!!  TRUTH IS IN BIBLE.  Read and study the BIBLE (TRUTH) and you will be making better decisions!!