The notion for this post came on Sunday, October 9, based on two unrelated occurrences the same day.

It was preceded  by a lawn sign down the street, “Jesus Loves You”, planted some time earlier; and by another recent appeal from a nephew in Texas who’s become very active in a most worthwhile charity called Covenant House.  These two activities were also unrelated.  Except all four, and countless others, relate to “Christianity”, which in some way or other relate to “Jesus”.

Those who read this space on occasion know my background and behavior related to Christianity.  Those who are people just stopping by, I’m lifelong Catholic, in the peace and justice ‘wing’ of the church.

Most of what follows relates to the two occurrences on October 9.  Having said that, a source which seems reliable, says that there are more than 200 Christian denominations in the U.S., and 45,000 world-wide.  Christianity is hardly a monolith, and its a very human institution.  And Jesus is certainly a player in Judaism and the Muslim faith, among others.  His story, as told by others long after his death and resurrection, lives on, to be interpreted endlessly, in assorted Bibles and sermons….

Here are a couple of vignettes, just to encourage thought, based on two recent occurrences, for your consideration. 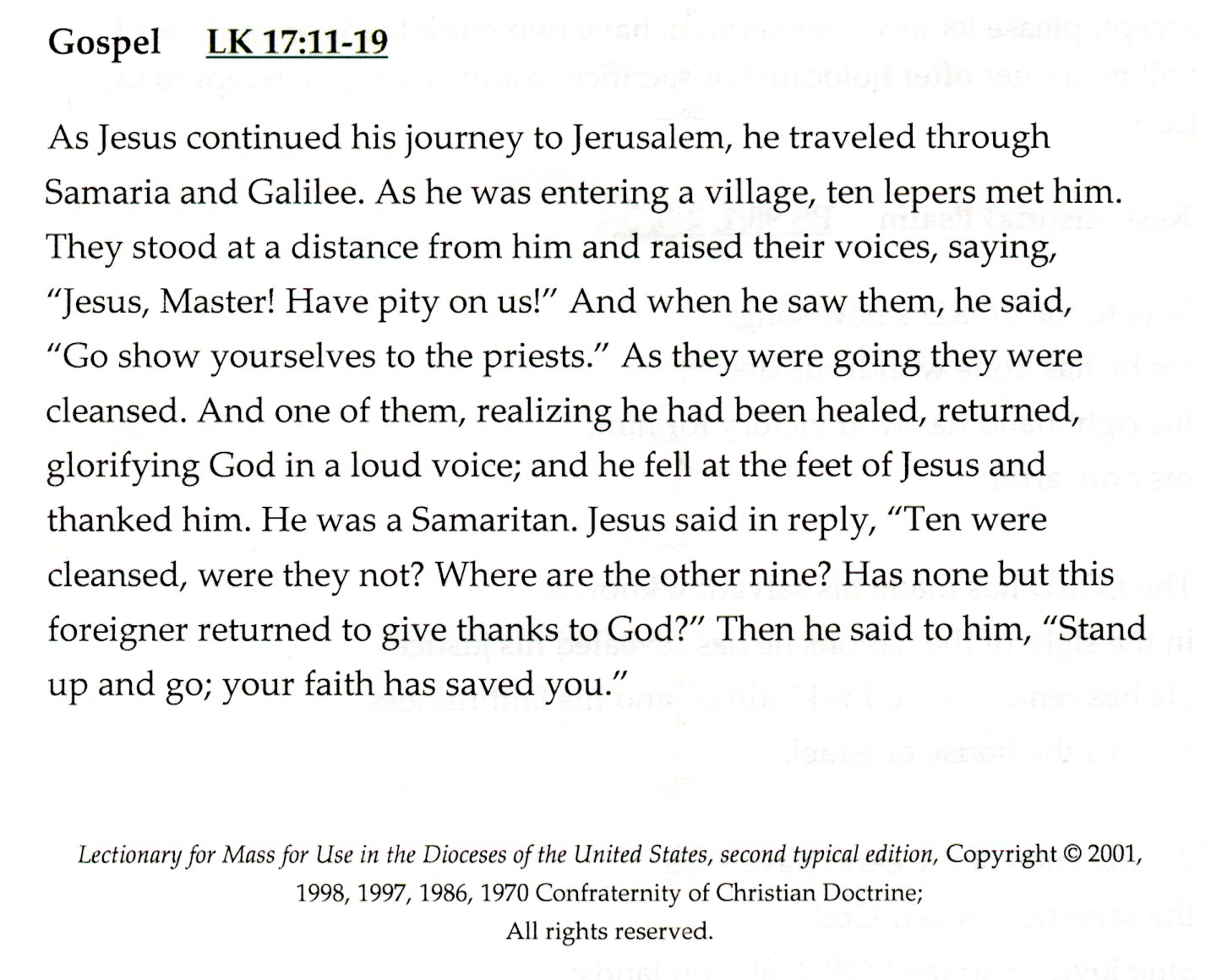 How does this apply to you?  What does it mean?

Father Harry’s focus was on the historically negative relationship between the Samaritans and the Jews…same God, different rules…he compared their relationship as roughly akin to the present day Israeli/Palestinian relationship.  The Samaritans were not the good guys in the Jewish way of thinking….  But they were not all that different, either.

In the Bible story, one of the Lepers healed was Samaritan, and per the Gospel he was the only one of the ten to come back and say thank you.  The focus was on the other nine, likely some or most may have been of Jesus’ group, the Jews. “Where are the other nine?”, was the question.

The Priest was not so indirectly calling attention to our own tribalism in our own country.  I wish his message had been  recorded.  He gave great food for thought.

2.  Back home, a few hours later, we tuned in Sixty Minutes, a usual Sunday evening choice.  This particular program had a segment on the new President of the Southern Baptist Convention – a large Protestant Denomination in the throes of change; attempting to come out of a major sexual abuse scandal.

This was not a compare/contrast recommendation…simply an opportunity to learn a bit about human leadership in another religious organization going through tumultuous times; a crisis in leadership.

The new President of the Southern Baptists was a younger man from a small congregation somewhere in Texas, and the interview – what we saw – revealed a sincere man committed to positive change, but nonetheless constrained by his own personal beliefs, and the beliefs of others in the leadership of this large denomination.  The segment is always available through 60 Minutes, (Church and State, Oct 9) so I won’t interpret it, beyond saying what I said above.

Personally, I’ve long ago decided that I am what I am and to each his own when it comes to choice of faith, regardless of what  that might be.  I mused in an earlier post that even in my own parish, on a given day, the nearest 100 people in proximity to me in the church probably have different opinions about many things, including relating to theology.  We’re just another community, each of us there for our own reasons.

One way or another we choose the leaders who are supposed to represent, in my case, Jesus’ values as recounted in the scripture.  Not an easy deal.  We all are responsible.

In the scripture reading above, I included, on purpose, the copyright designation: the source of the words used in the Catholic version.

I’m not a Bible reader per se, but I probably have ten Bibles here, and I decided to look up the wording of the above quotation from Luke in two of them.  I also compare with the few words that I emphasized.

Grandma’s 1911 Catholic Bible: “…one of them, when he saw that he was ae clean, went back…and he fell on his face before his feet,, giving thanks; and this was a Samaritan…Jesus answering, said, Were not ten made clean? and where are the nine?….”

New Revised Standard (red line version): “Thence of them, when he saw that he was healed, turned back…prostated himself at Jesus feet, and thanked him.  And he was a Samaritan…Were not ten made clean? But the other nine, where are they?”

Where do you stand?  Who are “we”?  I would submit, these are not easy questions regardless of belief or non-belief.

Life Without Parole Three Weeks from Today
Scroll to top