The Inauguration of President Biden and Vice-President Kamala Harris is Wednesday January 20.  If you are interested, check here.

About noon today (Saturday) I took the short trip over to the Minnesota State Capitol, just to see what was happening in our state’s possible ‘war zone’ in the wake of The Capitol insurrection on the 6th of January.

The trip is a short one, albeit on slick winter roads, and near the Capitol on the wall of the Minnesota History Center I saw this sign.  Nothing could be more appropriate for today. 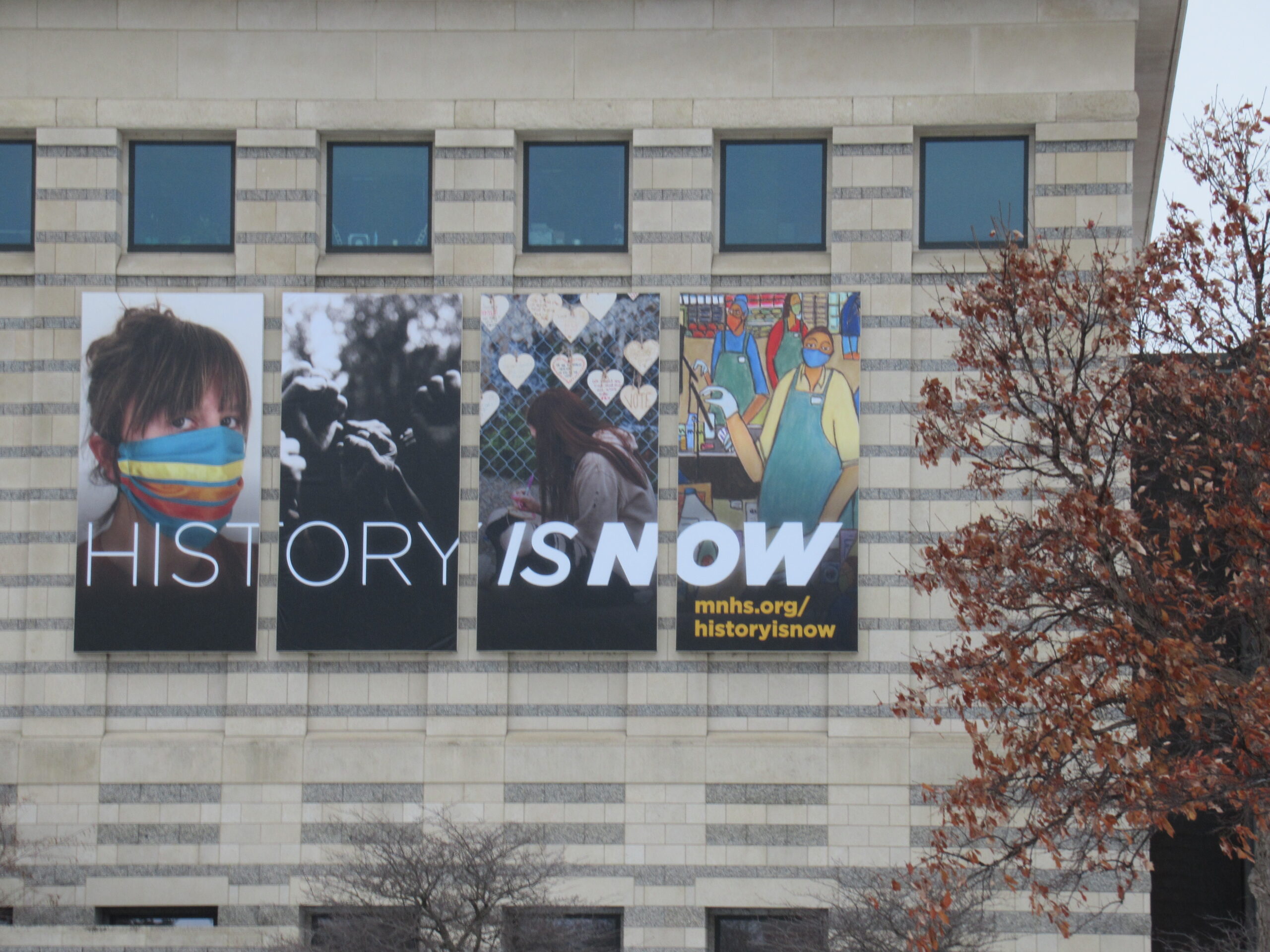 Indeed, every instant of our lives is history.

Over 20 years ago, in the first year of the then-Newseum in Rosslyn, VA, I saw the quotation, “news is the first rough draft of history“.

We – all of us –  make history every instant of every day by what we do, or not.  History is far more than the President or the favorite celebrity we love to love…or hate.  History is US…every single one  of us…all of the time.

To my left, today, as I took the above photo, down the street perhaps a half mile at the most, stands the Minnesota State Capitol.  This day, the major streets into the Capitol area were blocked off, and supervised by an unknown number of law enforcement personnel.  The morning paper said that people could walk in to the Capitol area.  There were few of these this dreary day.

I turned to my left and took a photo.  This was the scene from my History Center vantage point shortly after noon today. 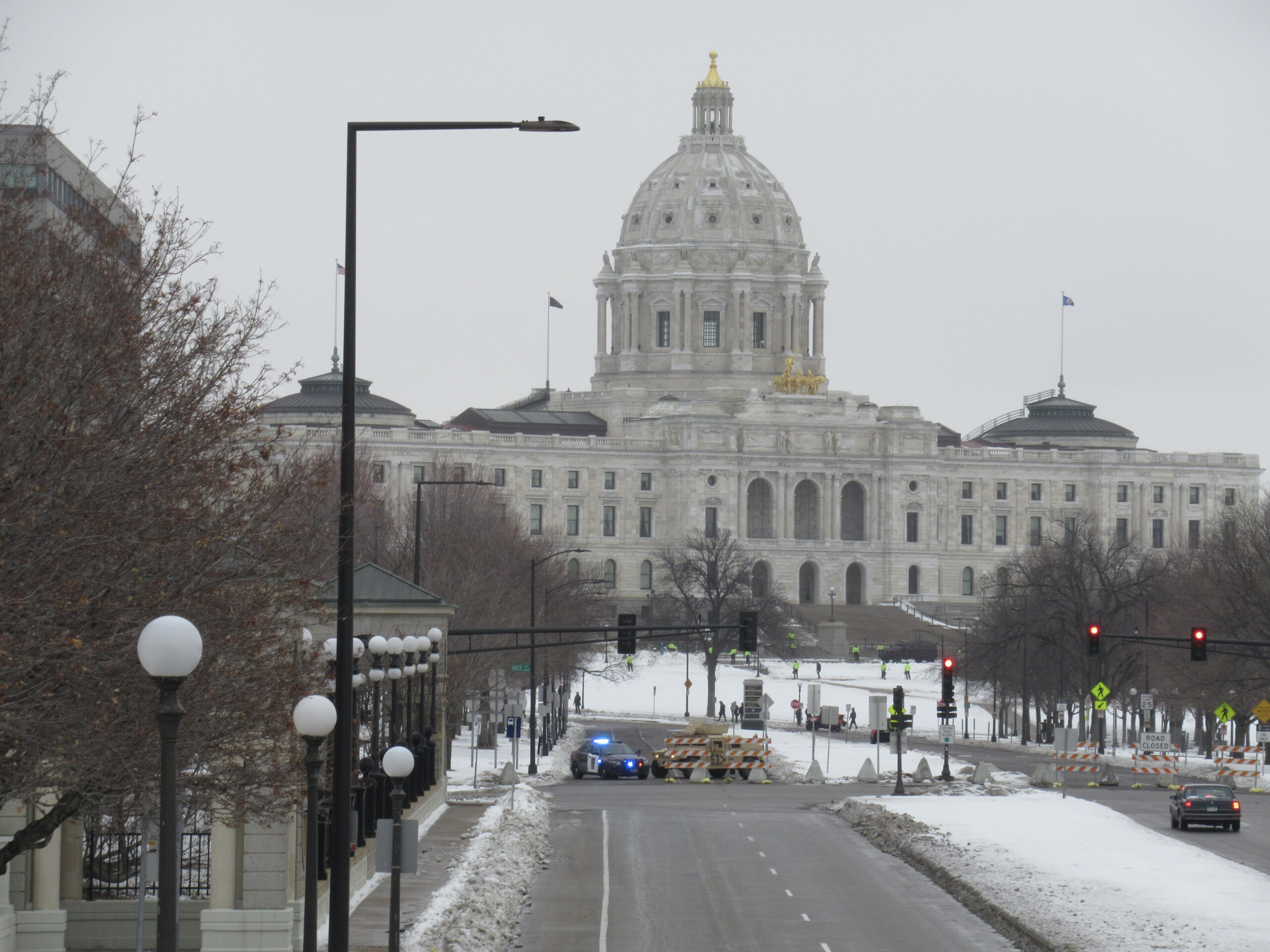 Where Rice crosses John Ireland Blvd was a single highway patrol vehicle, a military tactical vehicle, and ordinary wooden barriers.  This was also true across the way at Cedar St., which is also the site of the National Guard facility; and likely the same at other access points around the Capitol area itself.

In the distance, by the Capitol steps area, one could see people who probably were security personnel, and that was about all.  But no doubt this piece of real estate was covered.

Here’s what the Minneapolis Star Tribune had to say this evening about what was happening at the Capitol steps area about the time I was there.  There may have been a few protestors there while I was.

What will transpire the next few days?

I don’t know.  Nobody does.

There’s plenty of speculation, and loads of preparedness everywhere.

I’m going to go out on a long limb and predict that the next few days, everywhere, will essentially be non-events, at least in terms of crisis.  Photos of empty streets will dominate.  And that quiet will be a good thing.  But that doesn’t mean that the problem of violent anarchists is over.  I could as easily be wrong.  Sure, there could be incidents.  Try to keep them in their proper perspective.  Don’t empower hate.

For the moment, the thugs, including the President, Guilani and Brooks, have had their awful fun.  Several people lie dead; our government officials and we, too, are traumatized.  But remember there were less than 10,000 Americans – a tiny fraction of the 330,000,000 of us – attacking and violating our national Capitol building.  We need to keep this in mind.  It was quiet in my neighborhood on the 6th, and likely in yours, too, and has been since.  Peace outnumbers War by many times over.  But this is no time to rest easy.

We need to be witness to sanity, in all of the many peaceful ways available to us.  We cannot stand by and tolerate the insanity we watched unfold.  We cannot be silent, or depend on somebody else to be our voice.  We need to be our own voice.

I saw this Gandhi quote in a book I’ve been reading, and it fits our history, now: “The only tyrant I accept in this world is the still voice within.”

It is time to begin the march towards sanity.

POSTNOTE Jan. 17: I took another drive to state Capitol area today, essentially the same situation as yesterday.  Lots of news in the Sunday Minneapolis Star Tribune.  Here’s a particularly relevant and distressing article that appeared only in the print edition (click to enlarge): StarTribune front page Jan. 17 2021 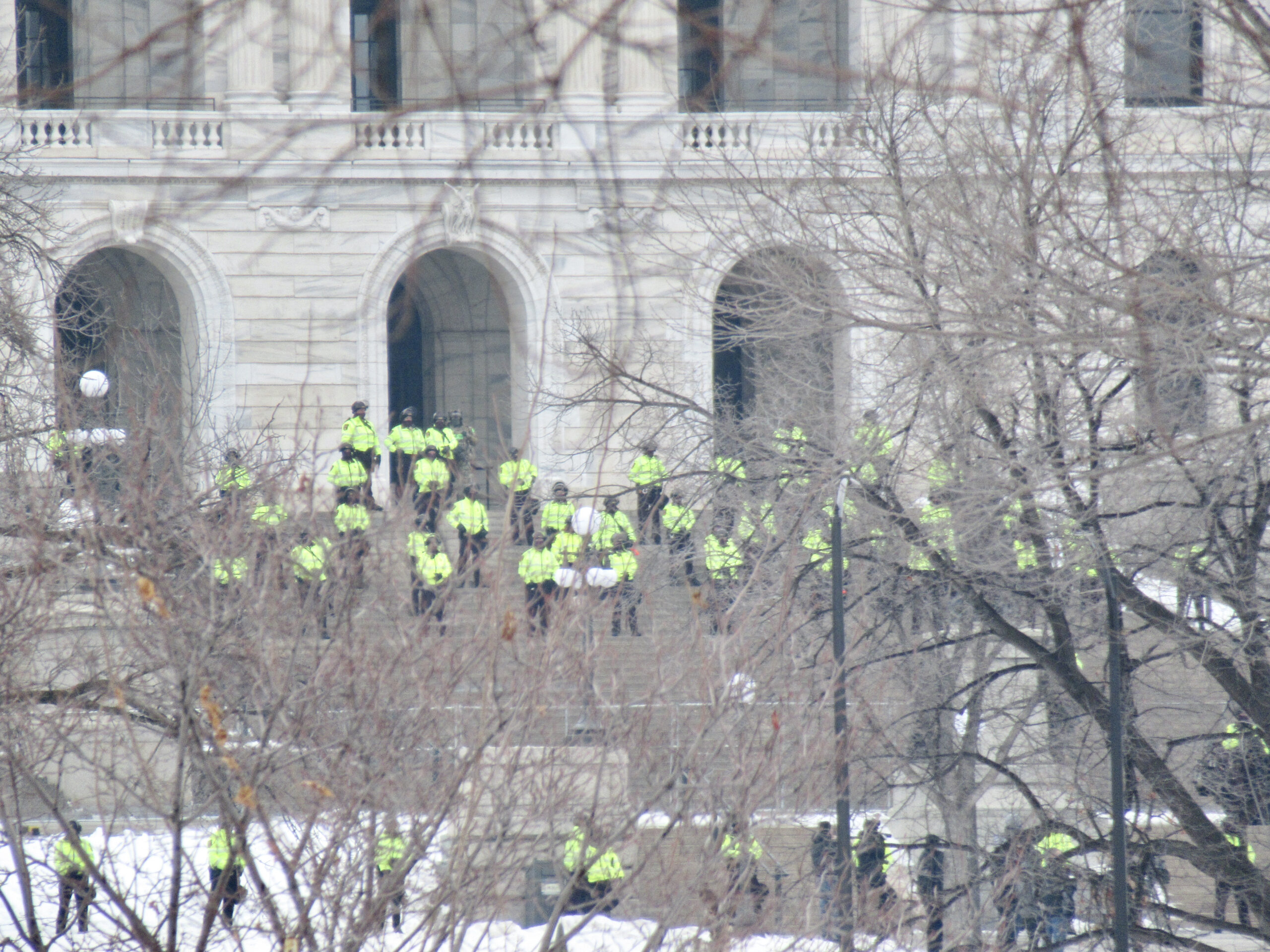 Minnesota State Capitol steps about noon, Sunday Jan. 17.  Appeared to be a rehearsal by security people.  Telephoto from south end of the Capitol Mall near Veterans Service Building and the USS Ward Memorial.

from Jerry: Thanks for your blog, Dick.  I read it saying “yes” a number of times.  The old Japanese proverb “may you live in interesting times” is certainly true today.   On Martin Luther King day we realize how far we still have to go to assure  equality and justice for all.

from JoAnn: Right on!

from Barry: Thanks for the report Dick.  For some of those folks I think they are a bit surprised that they are in trouble and may actually/hopefully face consequences. Trump however is as always delusional. Will he ever suffer a negative consequence?

from Brian: This is one of your best posts. I love the picture of the state capitol building. Thanks so much for sharing. And I agree with your spirit.

from Florence: Thanks, Dick.  Good food for thought.  Peace and joy this week and throughout 2021.

from Julianne: I read the [Star Tribune] article twice. Waterbury was indeed calling on the crowd in MN to move to the governor’s home to get him. She had asked for him to talk with her one on one. What the intent was to move to the governor’s mansion is unclear. Were they going to storm into his house and was the crowd deflected by the police? Not clear in the article what their intent was but the police removed the governor’s son to protect him, so it appears that the threat was real. What was the purpose of the threat? She says she is willing to die for her goal. What goal? Was it to keep the “Republican president” in place despite the results of the election? Was this a government takeover to prove – what? My family in Wisconsin feels threatened by living in a Republican dominated community in a Republican state. They are planning to hunker down even more than what the pandemic requires because the threat feels real to them. The multiracial daughter of one of her friends feels threatened anywhere in her community and even with her friends. Fear rages and anger is widespread and is growing within this country. The anger is diverse and the fear it generates is spreading. I am at a loss for words. Trump has fed on this anger and has become the focal point of the anger from many sides. He loves it. He owns it. He has become its leader. Our whole country is at a loss as to how to define it. But it is real. We are clearly divided into many different parts until the anger has become one anger. We all lose because of it and our country loses because of it. And the world looks on in shock, bewilderment, and sometimes cheers at our fallen country. I really don’t have words express my personal feelings of loss and of fear.

Overnight very early Jan. 19:  Just Above Sunset nicely sets the stage for the next chapter of America:“Somehow Making History”.  Regulars at this space know I’m a fan of the retiree in Hollywood who composes the column most days, I think was his hobby.  I encourage folks to subscribe.  The price is really right!

Kathy, out in Oregon writes last evening: Am so enjoying the break from last 4 years of over 11,000 tweets that were constantly broadcast daily on even NPR.

You know Dick- you’ve said you are inundated with so much information coming at you but I’d like to suggest you give Dr Heather Cox-Richardson’s daily Letters from an American a read.
She is featured on Bill Moyer’s bi-monthly blog. She is history prof at Boston University from Maine who has been shepherding  us thru the troubles of this past year with her daily Letter… sometimes adding a photo her husband has taken. I like her because she doesn’t sensationalize the events, she puts things into a historical perspective and always leaves us with a bit of hope. She will keep this up through Biden’s first 100 days. However, we’ve formed a community that may continue on.
You may want to give it a peek.
*
Dick, responding: I enthusiastically agree with Kathy’s recommendation of Heather Cox-Richardson’s post.  Whatever happens in the next 48 hours, we Americans will wake up on Jan. 21 with an opportunity to start over…we’ll see how WE do.
*
overnight, very early Jan. 20: “The Very Last Day”
overnight, very early Jan. 21: “The New Old World”
https://thoughtstowardsabetterworld.org/wp-content/uploads/2022/04/thoughts-300x138-1.jpg 0 0 dickbernard https://thoughtstowardsabetterworld.org/wp-content/uploads/2022/04/thoughts-300x138-1.jpg dickbernard2021-01-16 22:30:422021-01-21 03:14:30History
4 replies