A couple of unrelated happenings this week lead to this column.

This week, a relative, Donna, sent an old photograph with an inquiry: did I know one of the people in the photo? 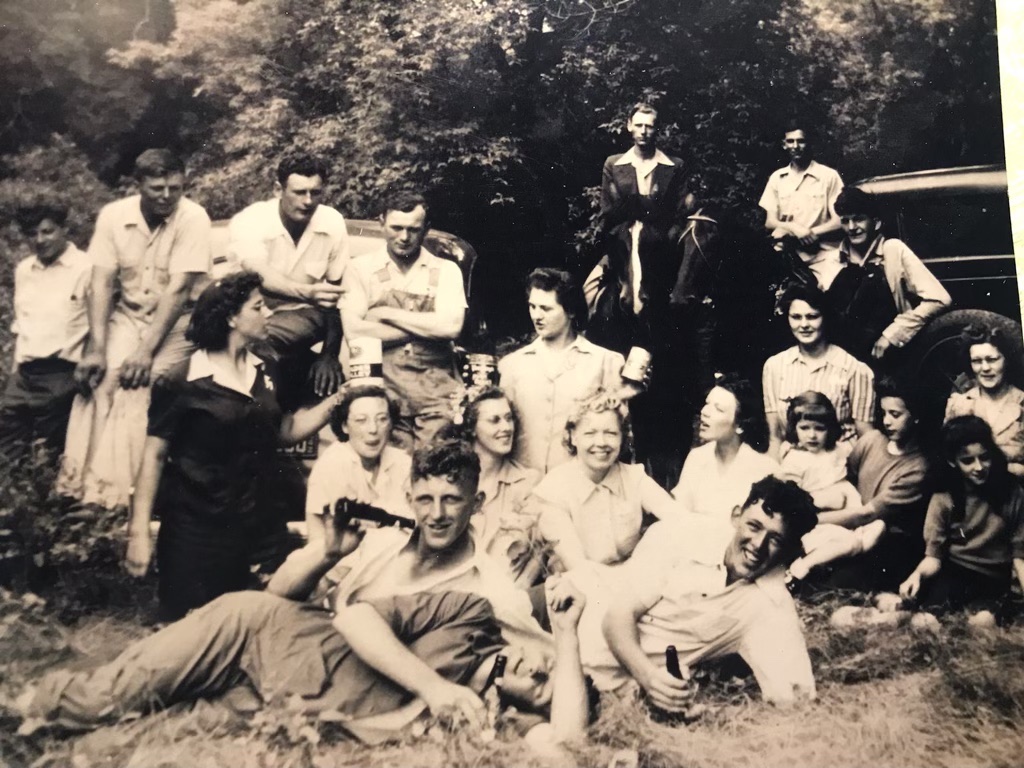 north of Valley City ND circa 1940, a group from the St. Mary’s community. Note the two on horseback.

As is quite typical with old photos, this one didn’t have a date or names written on the back.  I could help: I identified my Aunt Mary, and Uncle Bernard, and Mary’s sister, my Aunt Florence.  I suspected the photo was probably about 1940, the year I was born.  My cousin, Mary, from the larger family, added a little bit to the conversation the same day.  “Yes that is my mom [and dad, Florence and Bernard].  That picture was taken down by the creek that was below Uncle Hugo’s farm. Now that creek is Lake Ashtabula.  Mom said they had so much fun down there.  My Dad sure had a head of hair.  Mom and Dad were married in [19]43. So you’re pretty accurate.”

(For non-family, the popular Lake Ashtabula, a part of the Sheyenne River dammed in about 1950, is perhaps a dozen miles north of Valley City ND, and the persons pictured probably mostly lived in the area around the nearby St. Mary’s Church in rural Dazey.)

There are lots of family stories and transferrable memories in that picture from 80 years or so ago.  Few if any of those in the picture likely are still alive, but have left behind parts of themselves in their descendants and in other ways.  All of them were survivors of the Great Depression, just ending; and if I’m right, this picture was taken right before WWII, which also impacted on all of them.

In sundry ways, folks like them were my generations teachers in life…we watched….  Because of them, we became what we are.

At the time the photo  crossed my screen, I was in the process of updating my address list, which I still keep in paper form, and which I last updated six years ago.  As you might imagine, there were lots of scratch outs and additions – changes of all sorts.

In this particular revision I made special note of a cadre of people I met after retirement – people who had influenced me in my chosen post-retirement avocation, peace and justice work.  Many of these were part of the Minnesota Alliance of Peacemakers; all of them phenomenal role models.

Here are some of those heroes of the past 20 years, non-family people who were my mentors, who have passed on between 2015 and today. There have been others, not listed here, because they died before this list was generated, but the point is that these were people who influenced me, whether or not they knew it,  at the time.  Heroes.  Thanks to all of them.  Probably, they are not known to you, as are the people in the photo, but certainly they are known to me. These were only a portion of those from a single segment of my life; all in the time period after I retired in 2000.  Amazing people, all of them.  Just a sample, crossed off of my address list, but not my memory.

Who are your heroes, the men and women who shaped who you are?