A week from today is Father’s Day.

Three days ago, a father died in a St. Paul hospital; Thursday of this week will be his funeral.  His grandson is Bennie, who is scheduled to 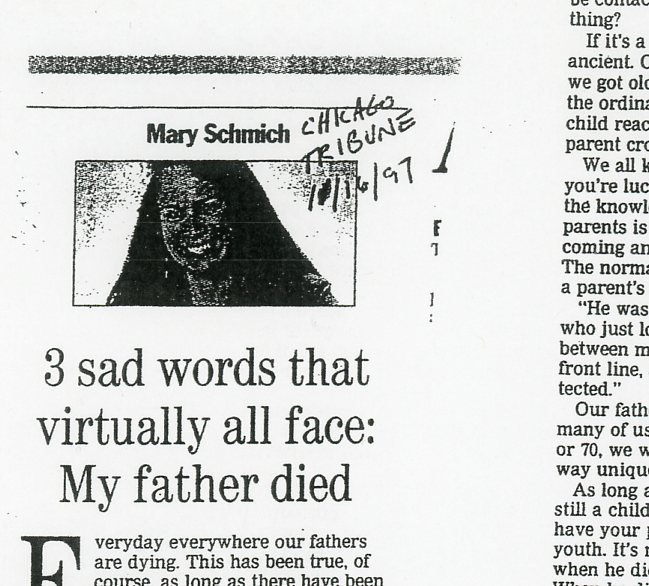 begin coming out of the induced fog he’s been in since  the car accident Memorial Day weekend.  His son, the Dad of Bennie, also my son-in-law, is doing better physically, but “home” for him now is at the hospital with his own Dad’s daughter-in-law and  grandson.

I could go on and on.

Family relationships and circumstances go on and on, far beyond the boundaries set by the first message received; the media coverage; the obituary….

They are often complicated.

This day I think back to the old newspaper column seen above.  The total column is here: My father died 1997001 .

I was at the Chicago O’Hare Hilton, Nov. 16, 1997, there for a conference, leafing through the Chicago Tribune, and  saw the article.  It was a Sunday morning.

Nine days earlier, my own Dad had died down in Belleville IL, on the doorstep of 90 years old.  Susan Schmich’s column “spoke to me” that Sunday morning, and ever since, any time the father of someone I know dies, I send them a copy of this column.

Now, I will be sending it out again.

Bennie’s Grandpas death was not unexpected.  He was told a year ago he probably wouldn’t make it to his next birthday (later this summer).  It was no secret.  The family knew.

The intersection of multiple ailments which couldn’t be remedied for medical reasons was the ultimate cause.  But he had a reasonably normal life till a few days before his death.  We saw him not that long ago.

He wasn’t perfect, but who of us is “perfect”, by even the loosest definition of the word, especially reviewing many years of life?

He and his wife were the first at the hospital when Bennie arrived by helicopter from the accident scene about two weeks ago.

For years this Dad  witnessed the graveside rituals of many at the Ft. Snelling military cemetery, as a loyal member of those unsung teams who give the last salute to the departed veterans.

I understand that he had wanted to be buried at Ft. Snelling, but just days before his death learned he couldn’t be – his National Guard service wasn’t enough to qualify under long-time VA rules.

Maybe there will be more conversations about that.

For now, let it suffice, a Dad died.

And the impact is broader than one might think.

Thanks for your message. In synchronicity, I texted Father’s Day greetings to my uncle, 2-brothers, and a cousin this morning. My brothers lovingly informed me that I was a week early, however, they enjoyed the affirmation of celebrating every day.

My father passed in 1990, a few days after my birthday. Like with Bennie’s grandpa, my father’s death was not unexpected. I always felt grateful that my father seemed to wait until my birthday came and went before he went to his heavenly home.  He is buried at Ft. Snelling; I hope Divine Intervention will come through for Bennie’s grandpa to be buried there too.

Thanks again for your timely article and message. Have a relaxing Sunday. Peace 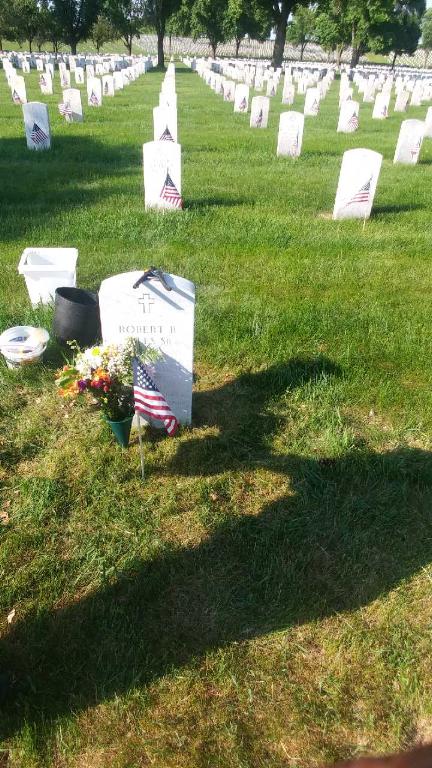