Thursday evening we came home from a visit with our friend, Catherine.  It was still daylight, and the outlines of a full moon rising was on the eastern horizon.

Easter is one of those many holidays which is a blend of nature, custom and religious tradition: the Sunday after the first full moon after the vernal equinox – in other words, the beginning of Spring time.  Depending on your tradition, the rest of the abundant blanks are filled in assorted ways.  We went to Good Friday at Basilica of St. Mary on Friday night; and Easter Sunday will be with two our families.  The grandkids in the area are enriched with $10 bills.  And so it goes….

My thoughts go in a couple of directions this year: 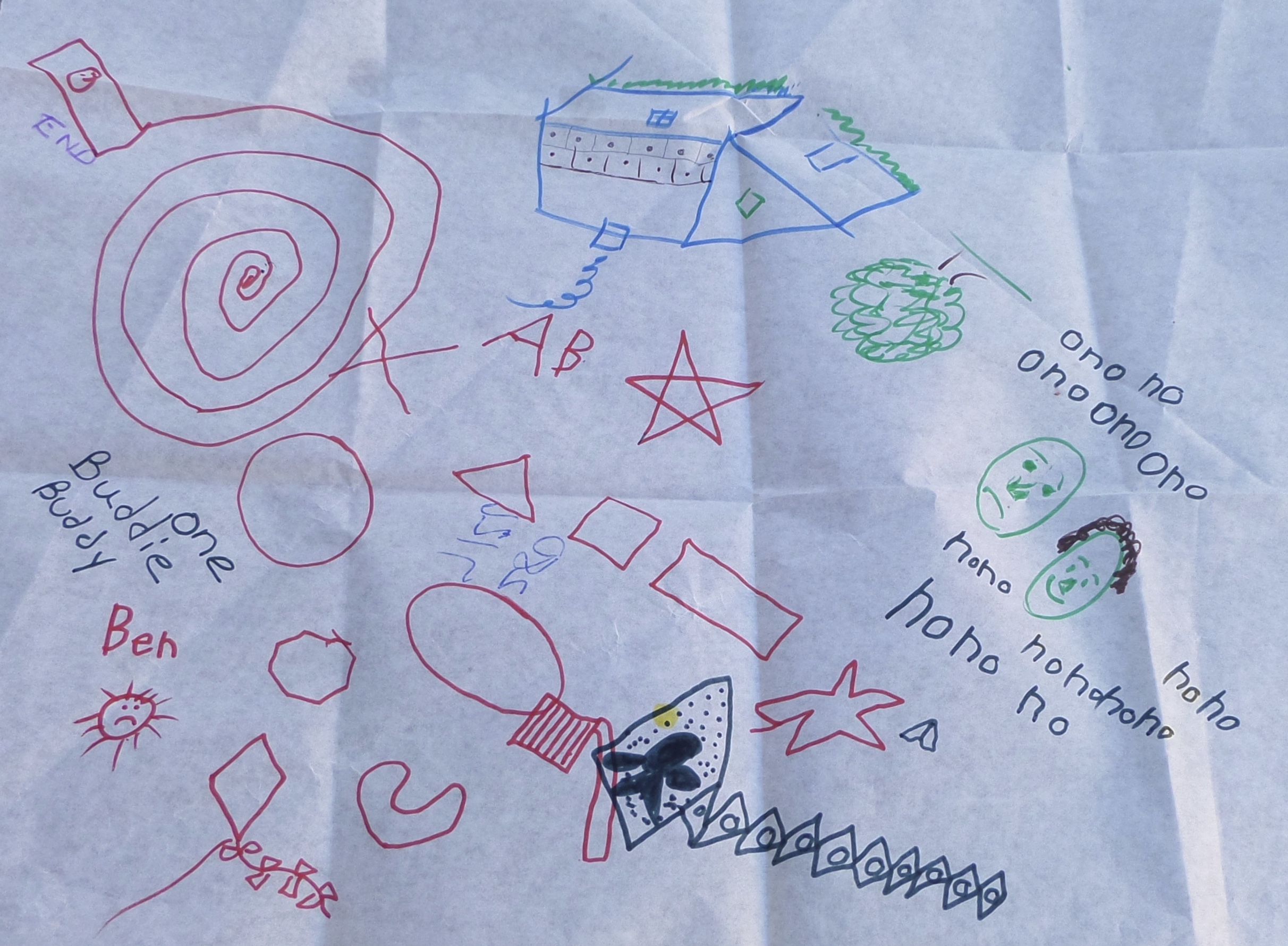 Death and Resurrection: Easter is a primary symbolic time in my own faith: a new beginning, as it were.

Those who know me, know that this has not been a usual year.  Grandson Ben, now 13, who very nearly lost his life May 25 last year, remains on the road to recovery, and doing very well.  Me, Grandpa, was diagnosed on the very same afternoon as Ben’s accident, as needing major repair work on my aortic valve.  A heart operation on Dec. 4, 2018, started my own journey to recovery.

A few weeks ago, Bennie, still recovering also, Grandma and Grandpa, met for pizza at a local pizza restaurant, and the combination of magic markers and butcher paper, led to the above work of art, to which we all contributed; probably half is Bennie’s work.  I saved this piece of paper from the trash.  To me, this is a symbol of re-birth, in a pretty profound sense, for Bennie.  That day at Ronalli’s was a memorable day.

Bennie’s parents and surrounding support system, including Grandma especially, are doing a great job.  And so is Bennie, though progress in some areas remains slow and the final picture unclear.  But everyone is working hard, together.

Rebirth and Renewal of the natural world: I think back to 1905 when my Mom’s parents, Ferd and Rosa (Berning) Busch married in Wisconsin (Feb. 28) and moved to the ND prairie to begin their long lives on the family farm.*

It is not certain exactly when Grandma arrived at the farm in 1905, but judging by family letters which were saved, it appears to have been about April 1, with her sister, Helena.  They would have come by train.  Grandpa had come west right after the wedding with a cousin, John Terfuchte, who was a carpenter.   Quite likely Grandpa’s brother, Leonard, came about the same time. It was hardly spring-like yet.  In 1905, Easter came on April 23, the full moon on April 19, 1905, the same day as the full moon for 2019!

Back in those days, postcards often substituted for photographs in family letters, and lucky for everyone, the Busch’s (probably Grandma) kept them all.  Some years back I borrowed the box from my Uncle Vince, and scanned about 150 of them, of which about 13 related to Easter time from about 1905-13 or so.  You can view them here: Easter Cards early 1900s003.

Later, I wrote about them, and the article remains on the net, here.  Most of these postcards are in the permanent collection of the North Dakota Historical Society in Bismarck.  Most of these included a brief letter from one person to another.

*POSTNOTE: it is easy to overlook context with things like the old postcards.  Grandpa was 86 and Grandma 88 when they died in 1967 and 1972 respectively.  I was lucky to know both of them as an adult.  On the other hand, when they moved to the ND prairie in early 1905, they were young newlywed, 24 and 21.  For all of us, time passes quickly by.  Best to do the best we can with the time we have.

“The Jerk” World Law Day Wednesday May 1.
Scroll to top