I’m a creature of habit, one aspect of which is “early to bed, early to rise….” which makes watching a Convention at bed-time is a non-starter.  By 9:30 CDT last night I was asleep, as usual.  But I was impressed with the start.

And my favorite blogger, Just Above Sunset, seems to keep a schedule opposite to mine.  So his summary overnight, “Selling Democracy”, is my substitute (always with his permission).  His summaries are always long, so that doesn’t help with people who prefer twitter, but on we go.  We are a nation full of individuals, trying somehow to save a huge country from destroying itself from within.

The Conventions this year are virtual, as are many of the meetings we attend, and church services, etc.  We’re in a new world.

Yesterday on my walk I got to thinking about my first brush with network, other than TV or radio.

It was, I think, the summer of 1984, in Tower, Minnesota.  I represented teachers on Minnesota’s Iron Range, and that summer I stopped in to meet Supt. Pete Jurkovich.

This particular day, there were a number of boxes of then-primitive receivers – I can’t tell you if they were Apple, or Microsoft, or something else…but what I can say I is that the Superintendent was part of a group that was promoting distance learning for small schools that were too small to have, for instance, any foreign language instruction.

So the initiative of these indomitable folks was to establish a fiber optic network so that, for instance, a teacher of French at Virginia Community College, could teach via TV students in Tower-Soudan or other places.  The teacher had a TV studio in place, and the lesson was transmitted by cable.

Some years later I saw a cartoon that illustrated the concep: Distance Learning (click to enlarge).  Not long ago I saw a vintage 1984 computer that was like the devices I saw in the Superintendents office that day: 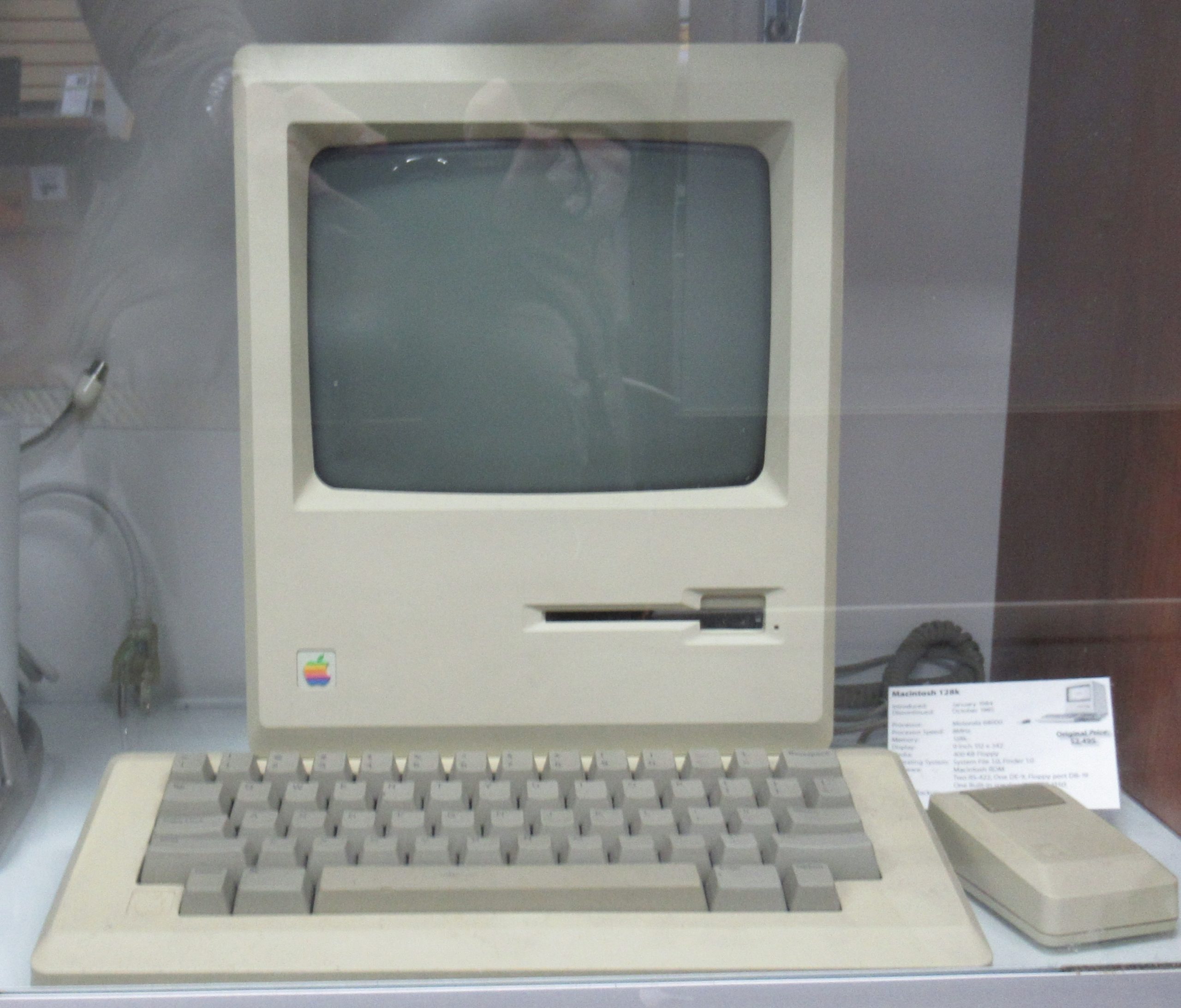 Supt Jurkovich was part of a network of school officials who were espousing this technology, which was a hard sell in those days before the internet became ubiquitous.

I followed it, but only a little, so I’m not even sure of what the movement was called, or if a history of it exists.  Perhaps someone can enlighten me.

I don’t recall ever seeing it actually in operation, though I know it existed.

Whatever the case, what those folks were working on years ago, is now old hat.  And life will never be the same again.

Dick: I asked a person I know, Mary, who is a long-time seasonal resident in the Tower-Soudan area to look at this post: “…at least take a look.  Maybe you can enlighten me a little more.  What I relate about T-S is true – an actual experience, really pretty vivid.  I don’t know if there is still a school in T-S.  The Superintendents office, as I recall it, was a vacant classroom.”

Mary responded: Your request hit a very raw local nerve.
There is no longer a school in Tower-Soudan (except for a small charter secondary created after the big scandal.)
The issue of using school funds to promote a ‘yes’ vote on a referendum to close, consolidate, build several new schools, etc, was eventually before the State Supreme Court. The ruling was in favor of the plaintiffs who objected to the changes, but it was too late to stop it. The voters were told the changes would save money and that has NOT been the case. Several gracious older school buildings now sit empty and the children have long bus rides.
Makes me angry every time I drive by the building that was the Cook school.
All of this deception was the recommendation of a sleazy consulting firm named Johnson Controls. Local voters paid a large fee to be ill-advised and misled.

Dick, in response (I was teacher union staff in the area from 1983-91; I left before the controversy described above): I didn’t mean to hit a hornets nest!
When I was staff up there Tower-Soudan was its own school district; then there was the immense (geographically) St. Louis County (Cook, Orr, Cherry, Forbes, Alango, Brookston, Toivola-Meadowlands and possibly more), then Nett Lake, Virginia, Hibbing, Grand Rapids, Eveleth, Gilbert, Ely, Babbitt and several more iron range school districts.  I know this has all changed, but it has been many years since I’ve been up there.  Pete Jurkovich comes up in google in a court case unrelated to school consolidation.  Apparently his Dad was a teacher in Aurora-Hoyt Lakes – I saw an obituary.  Pete had progressive ideas with the distance learning, apparently.  Distance learning was a real rare novelty then; today with Covid-19, virtual is about all we can count on.