Today we were planning to be at Our Lady of the Snows, Belleville IL, for the 50th anniversary of the Apartment Community, where my Dad, Henry Bernard, lived the last ten years of his life, 1987-97. A scheduling conflict caused a change in plans, so, rather than being on site today, I decided to do what Dad liked to do…look through pictures and reminisce. His travels “were by the National Geographic”, he liked to say.
I’ve picked one particular day in his life at Our Lady of the Snows: his 80th birthday, December 22, 1987.
(click to enlarge photos) 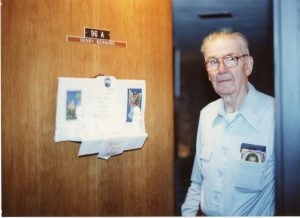 Henry Bernard at home, Apt. 96A, Our Lady of the Snows.

Dad moved north, from San Benito TX, in August, 1987. His San Benito friends, the Brasher’s, were “winter Texans” and lived in Belleville, and suggested he “try out” the Apartment Community for a trial period. He was 79. Mom had died in 1981. It was time.
Depending on one’s point of view, Dad either came and conquered, or was conquered by, this beautiful place with a great view of St. Louis Gateway Arch directly west. He took an efficiency apartment, which over time became his house (in almost a real sense). The beautiful grounds became his lawn, perfect for long walks; the chapel and the library were a short walk indoors, and there was a woodworking shop which he used, and exercise facilities as well. I would guess he was considered a “character” by the community at large. In assorted ways we kids saw him in action each time we visited. He was no recluse!
I choose one particular visit.
His 80th birthday was December 22, 1987, and he set himself a goal, per a national fitness program, to walk a 15 minute mile every day for 80 days, ending on his 80th birthday. His chosen route began at the ampitheater down the hill, and was timed to end at the Angelus bell.
My sister and I were there in the very early morning of day 80, to walk the route with him. He posed for a photo before he began. 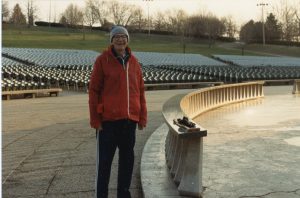 It was a rather icy day, I recall, but that was no deterrent for our Dad. He’d set his goal…period. Back and forth, row by row, he walked briskly. He was hard to keep up with. He was 6’3″, and he had been conditioning for this for 80 days! He arrived at his destination after 13 minutes. We were not far behind. I was pooped. The Angelus Bells rang.
His apartment, 96A, was a place to behold: a single bed, a homemade desk, a recliner, telephone, radio (to listen to the St. Louis Cardinals baseball games, etc.) There was never a dull moment in his life, right to the end. At his Memorial Mass at the Apartment Community Chapel a few weeks after his death we played an audio tape about family that he had recorded some years earlier at Our Lady of the Snows for St. Louis’ shutins on Radio Information Service (RIS) for the Blind. It was a nice testimony about him, for others.
I had especially hoped to be there this year because, not part of the communities planning of course, his death was on the evening of this day, early in the morning of November 7, 1997, when Dad died in the geriatric unit at Our Lady of the Snows. My sister and I were there at the end. He almost made 90.
Less than two weeks after his death I was back in Illinois, at a conference at the O’Hare Hilton, and picked up a copy of the Chicago Sunday Tribune. By chance, this day, I came across this column by Mary Schmich: My father died 1997001.
To this day, when somebody’s father dies, I sent them a copy of the column.
The following Memorial Day, 1998, we family members gathered at the Apartment Community to dedicate a flag pole to the memory of our Dad, and his brother, our Uncle Frank Bernard, who died December 7, 1941 on the USS Arizona at Pearl Harbor. We thought it a most appropriate memorial, and it is still there. Here is the program from that day: henry-bernard-flag-dedic008 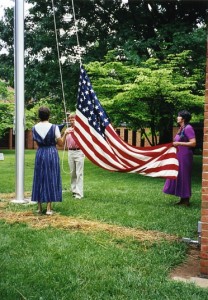 We Dads are people like everyone else. We have our stories, our triumphs, tragedies, dilemmas…. This is a good day for me to remember my Dad. I hope this story has a similar effect for you, about someone in your own life. 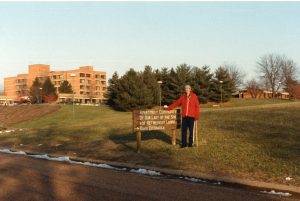 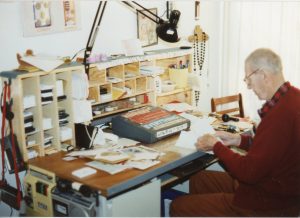 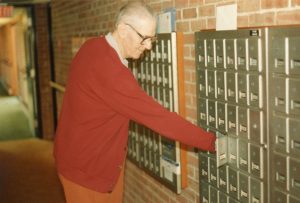 Checking for a “postal” in the days before computers took over. I doubt he ever actually touched a computer! 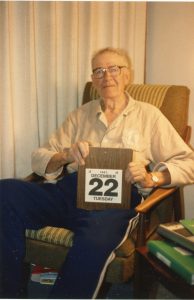 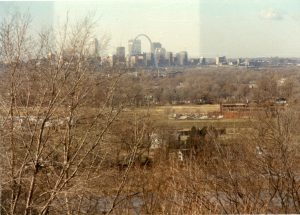