First, the New York Times offers free subscription for today and tomorrow: check here.
Those who follow this blog know that when it comes to elections, it is my habit to publish before the polls close. In this case, the polls are about to open, and I simply want to reflect on observations here and there, mostly in the very recent past.
First, a photo from Rochester MN last Thursday, Nov 3. (click to enlarge)
I think the sign says a lot about the current state of our country’s fractured political conversation (disclosure: I’m a long time member of the American Legion.) 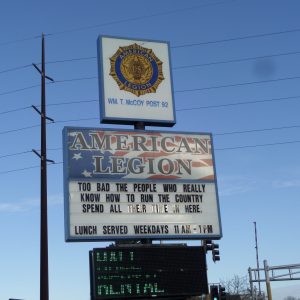 Some things I saw/experienced the last few days.
Saturday evening we took our older-than-ourselves neighbor, Don, to the Minnesota Orchestra to hear Dvorak’s “From The New World”, which was magnificent, of course. Leading off the concert, unexpected, was Aaron Copland’s “Lincoln Portrait” featuring five very short quotations of Abraham Lincoln between 1858 and 1863.
It was intensely moving, in a great part because the reader was Alan C. Page, retired Minnesota Viking, and Justice of the Minnesota Supreme Court, and a member of the College and Pro Football Halls of Fame.
Justice Page read from the heart, as well he would.
You can read the quotations here, from the Orchestra program: lincoln-portrait001.
Earlier Saturday, the local group of Evangelical ministers met the next table over, as always, to discuss some text or other in the Bible. This particular Saturday there were five, one still wearing his “Make America Great Again” hat. At the end, the person I’ve come to see as the leader of the group, said “vote twice on Tuesday”…there was no need to explain…I’ll see what they have to say, if anything, a few days from now.
Sunday morning, at the Basilica, I wondered how my Catholic Church would handle the issue. The Priest who gave the homily – retired, an outstanding homilist – did not touch the issue of the election. On the other hand, the Church petitions, a regular feature at Catholic Mass everywhere, following the Homily, was perfect (in my opinion). In effect, we were urged to take our responsibility as citizens very seriously.
Whatever happens today, it is pretty clear to me that more so than in most other elections in my adult life, people are attending to voting as more than a perfunctory and optional act. If nothing else – I say this as a positive – this election has seemed to get people’s attention, finally, that this is their country, and ours is a troubled place.
Of course, in the short term, there is a big downside for whomever perceives they “lose” – or “wins” – today. But maybe a few more will come to the conclusion that this country is every one of us, together, not just somebody who is President, or a faction that dominates, or, as I heard some disgruntled old guy say to his wife at the polls some years ago: “There, I voted. Now I have the right to complain.” But at least he was there, and he voted with passion, for or against somebody unknown to me.
Complaining, of course, isn’t enough.
Friday, I stopped in at an excellent conversation on the issue of peace and war in our world. Leader of the conversation was Paul K. Chapelle, a former Army Captain in Iraq War, a graduate of West Point. I’ve heard him before, he is always outstanding.
We were not there about politics, but in his quiet sort of way Mr. Chapelle took a moment to recall Homer’s Iliad, and two of the characters, Ajax and Odysseus. Mr. Chapelle, wise beyond his years, observed that Ajax had been magnificent in battle, of great strength. At the end of the battle, though, the people voted for the more eloquent Odysseus.
There was no discussion nor definition, of the meaning as seen by Mr. Chapelle. It was left for each of us to consider.
I looked up Ajax when I got home. The story is linked above.
As people who study war know, Warriors often prevail but only in the short term. In the long term, we need wisdom and we desperately need peace…and it has to come from within and among all of us, every day, in every way.
Do vote, but voting is only a tiny beginning.
I wish us wisdom.
POSTNOTE: My personal position on this election is here.
COMMENTS:
from Jeff: I have to admit, the sign at the American Legion sure made me chuckle.
I am not sure what they were thinking, but the sign did ring true… a bunch of old white guys who instead of doing something to change things are sitting in a bar…. ? Speaks volumes…
I know they meant it differently… but that’s how I saw it.
The race is to the swift.
When will the Baby Boomers cease to be at the top of the pile? Its time to tackle the real problems… instead of fighting the old culture wars isn’t it?
from Larry: Your “Election Day in the U. S. November 8, 2016” is probably your best essay yet. They’re all good, Dick, but this one was exceptional. I love the inclusion of the Lincoln quotes.
You are fortunate your Catholic priest did not push Republican candidates. As I listen to the Roman Church’s “Eternal Word Television Network” (both the radio and tv versions) and the Catholic “Real Presence Radio Network” station in our area, I cannot believe how they subtly and not-so subtly promote an extreme right-wing agenda along with encouraging votes for the most despicable Republican Presidential candidate in my lifetime. To that denomination denying a woman’s right to choose “trumps” everything. Everything! And to the “charismatic evangelicals” protecting their “religious rights” (read: 501(c)3 tax deduction) is everything, despite the character of the Republican Presidential candidate.
As I said, Dick, you were fortunate you attended a Catholic church with a priest who refrained from pushing a political agenda.
from David: Regarding the sign outside the Rochester American Legion Post: What is it with the electorate that so many feel that the way to solve the complex problems facing our country is to elect “outsiders” or “ordinary folks”? Having experience in government or governing is seen as something to vote AGAINST. Would these same people take their car to someone who advertised that they hadn’t done much work on cars? Or, seek out a surgeon who bragged that all she needed was common sense to cut you open and do that bypass operation? When did ignorance become a virtue? 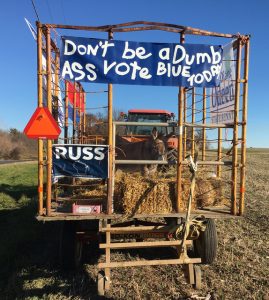 from western Wisconsin, thanks to David.

There are so many campaign lawn signs out there that I can’t believe anyone pays attention to any of them. However, a long-time Democrat just down the road from us has a creative bent to his urgings. Note the actual donkey on the trailer. When I stopped to take the picture, the donkey perked up and came over to the side of the trailer to get petted and fed some green grass. I think the two of us have a lot in common; politically, that is.
https://thoughtstowardsabetterworld.org/wp-content/uploads/2022/04/thoughts-300x138-1.jpg 0 0 dickbernard https://thoughtstowardsabetterworld.org/wp-content/uploads/2022/04/thoughts-300x138-1.jpg dickbernard2016-11-08 02:08:382016-11-08 02:08:38Dick Bernard: Election Day in the U.S. November 8, 2016
2 replies