Today’s post is a recollection about my Aunt and Uncle. Shortly, we leave for a few days vacation. This computer will lie quiet for awhile. The following post has nothing to do with politics…then again, it may have everything…. At the exact same time I was composing this, among many critical issues, the most important of all, “repeal and replace” “Obamacare” has erupted in our nations Capitol. Insuring all of we citizens against catastrophic medical costs is a very, very big deal everyone needs to care about. In my view, the launch of this supposedly new plan is like launching a nuclear bomb against an unsuspecting people…. Here is a long and readable summary to read on this issue, if you wish. I will write later on my deep personal concerns on this matter. More in coming weeks. 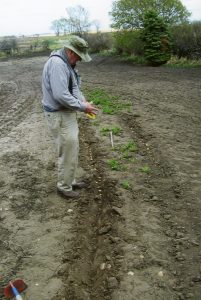 (click to enlarge any photos)
“Forwards” are not always welcome, as anyone who does e-mail knows.
Sometimes, like a couple of days ago, comes a gem, one such reaching me from a North Dakota farm near my ancestral farm at Berlin ND, a blog post by Rachel Held Evans received and forwarded to me by a good friend.
What caught my attention was the headline: “…Planting Onions*….”
What attracted my memory was remembering a row of onions I watched being planted by my Uncle Vincent May 7, 2013. (See photo which leads this post).
Uncle Vince was 88 at the time, and this visit he had a compelling need to plant some sweet onions in the now nearly vacant one acre garden he and his sister Edithe had kept alive long after the rest of the nine family members who had lived there, helping with and enjoying the fruits of the garden, had passed on.
Now there were only the two of them. and for seven prior years they’d lived in assisted living in town. But near every day they’d drive out to the old farm, and every spring was the ritual planting. Every year, the actual planted area decreased, but every year the entire acre was cultivated, to keep weeds at bay.
Now the gardeners were down to my Uncle, and he had very little energy left to expend. But once again he had plowed the ground, preparing the soil, and now it was time to plant something.
Six months earlier his sister had been admitted to the Nursing Home, and Uncle Vince now had to come to the farm alone. This year about all he was managing to plant were a couple of row of sweet onions. In his quiet way that pleasant day in May, I seemed to be witnessing almost a religious rite, near grief: a nod to a past that was rapidly disappearing.
It was while looking for the photo that leads this post that I came across another photo of something else I had seen at the same farm, a few minutes earlier that May day, as we drove up the lane, past the long vacant farmhouse. 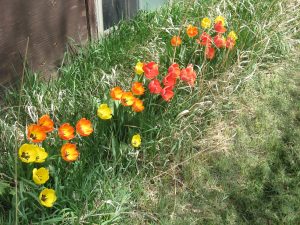 Those and other flowers were Edithe’s passion, and probably in a previous year she had planted them, and here they were, unattended, but beautiful nonetheless, adding life to the house and surroundings..
No one had been by to remind them that it was time to bloom; they paid no mind that no one was weeding around them, or making sure they had water; or that they had an audience to admire them. They just were….
It seems to me, now, four years later, that both Uncle Vincent and those flowers were sending their own messages to us, about things like reverence for the land and tradition, about devotion to the better sides of our nature. Many other messages can be conveyed. They are for you to contemplate yourself and, if you wish, to share with others as well.
Have a great day.
* – Ms Evans post talked about “revisiting Madeleine L’Engle’s Genesis Trilogy,” and being “struck by how forthcoming the author is about her own fears around raising children during the Cold War. She writes of one particularly worrisome season: “Planting onions that spring was an act of faith in the future, for I was very fearful for our planet.”
In her Mar. 1, 2017 blog post, Ms Evans commented: “Planting onions” has come to signify for me the importance of remaining committed to those slow-growing, long-term investments in my family, my community, and the world, no matter what happens over the next four years”.
POSTNOTE
Time went on after that May visit to the garden.
In mid-July I made another visit to Vincent and Edithe; and once again Vince and I went to the old farm between Berlin and Grand Rapids. 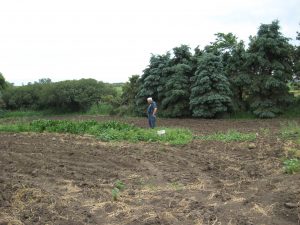 Vincent told me the rows of sweet onions were no more – he had gone out to the farm by himself, after dark, to plow the garden, and by mistake plowed them under.
It was clear to everyone that Vincents memory and general health were failing as his sisters had.
My next trip, in September, it was even more clear.
In November, 2013, Vincent joined Edithe in the memory care unit at the St. Rose Nursing Home in LaMoure. In Feb, 2014, she died at 94. Almost exactly a year later, in Feb, 2015, Uncle Vince passed on, having just reached 90.
At the lunch after Vincent’s funeral, neighbor farmer Pat Quinlan recalled the onion sandwich Vince had given him one day when he was over helping. It was the funniest of stories, as the photo below attests. Probably Vince would have squirmed, but it was all in great humor. Vince was who he was. In life, he would appear to be just an ordinary farmer with a small farm. But he was oh, so much more…. 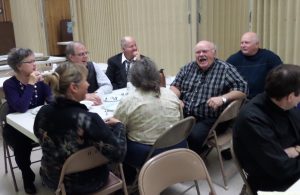 We have only our own images of what heaven might be like.
Perhaps there is a garden and flowers and gentle breezes there.
Meanwhile, here on earth, let’s do what we can to make this world a better place for all of us. 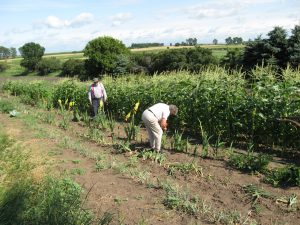 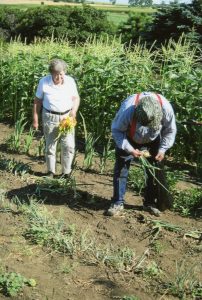 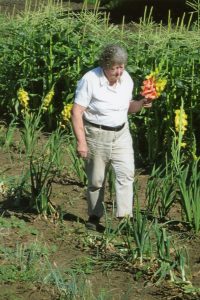 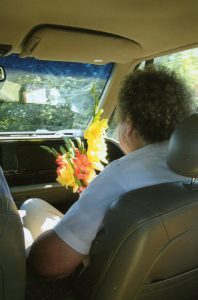