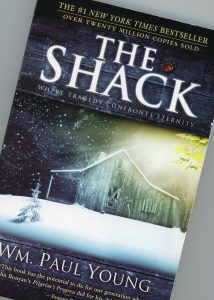 A week ago, with son and daughter-in-law, we went to the film, The Shack, at a theater within a few blocks of Littleton CO’s Columbine High School (April 20, 1999).

If you’re looking for something to do this weekend, take in “The Shack”.

This is a “to each his (or her) own” film…here’s “Rotten Tomatoes” and “IMDb” reviews.

I gave the book the highest rating; similarly the movie. Apparently I’m not alone.

As readers of this blog would know, I’m Catholic, and faith issues are important to me.

What I did with the Shack, both book and movie, was to reflect on the issues being raised, and how they applied to me, and how “organized religion” impacts positively or negatively on this business of “belief”.

Some time in the future, I’ll expand on this, in “The Shack II”.

Till then, consider taking a couple of hours to watch the movie!

Have a great St. Patrick’s Day and weekend to follow.

POSTNOTE:
After writing the above, I checked back and found a previous blog I had written after I’d read the book, and also the review I’d done of the book for Amazon.com. Here they are:

Earlier in 2009 I submitted the following review of the Shack to Amazon. It remains on-line, buried among many, many others: “As a rule, I don’t like novels, and when a friend asked if I’d read “The Shack”, and wondered what I thought of it, I bought the book, started it, but wasn’t sufficiently interested to continue past chapter two.

Then, a few months later, late in 2009, I picked up the book again, and this time didn’t put it down, and then recommended it to everyone on my Christmas greeting list.

As I read its message, The Shack gives us permission to forgive ourselves for our real and imagined transgressions, and casts the Christian Trinity in a most down-home and remarkable way. Is the portrait real? No more or less than any other expression of belief, about God and the Trinity and Eternity might be.

Ironically, the day after I finished the book, my pastor at the Catholic Church I attend gave a homily on hearing people’s confessions, and after they’d confessed, his asking them what penance they’d give themselves for their sins. He invited them to forgive themselves. I gave him a copy of The Shack, and I haven’t heard back from him. My guess is it doesn’t fit the theology he’s obligated to protect, but in his sermon he gave the exact same message that The Shack gave, in my opinion.
The Shack is a wonderful, remarkable book.”