Thinking about today brought back to mind this photo from about 1920. 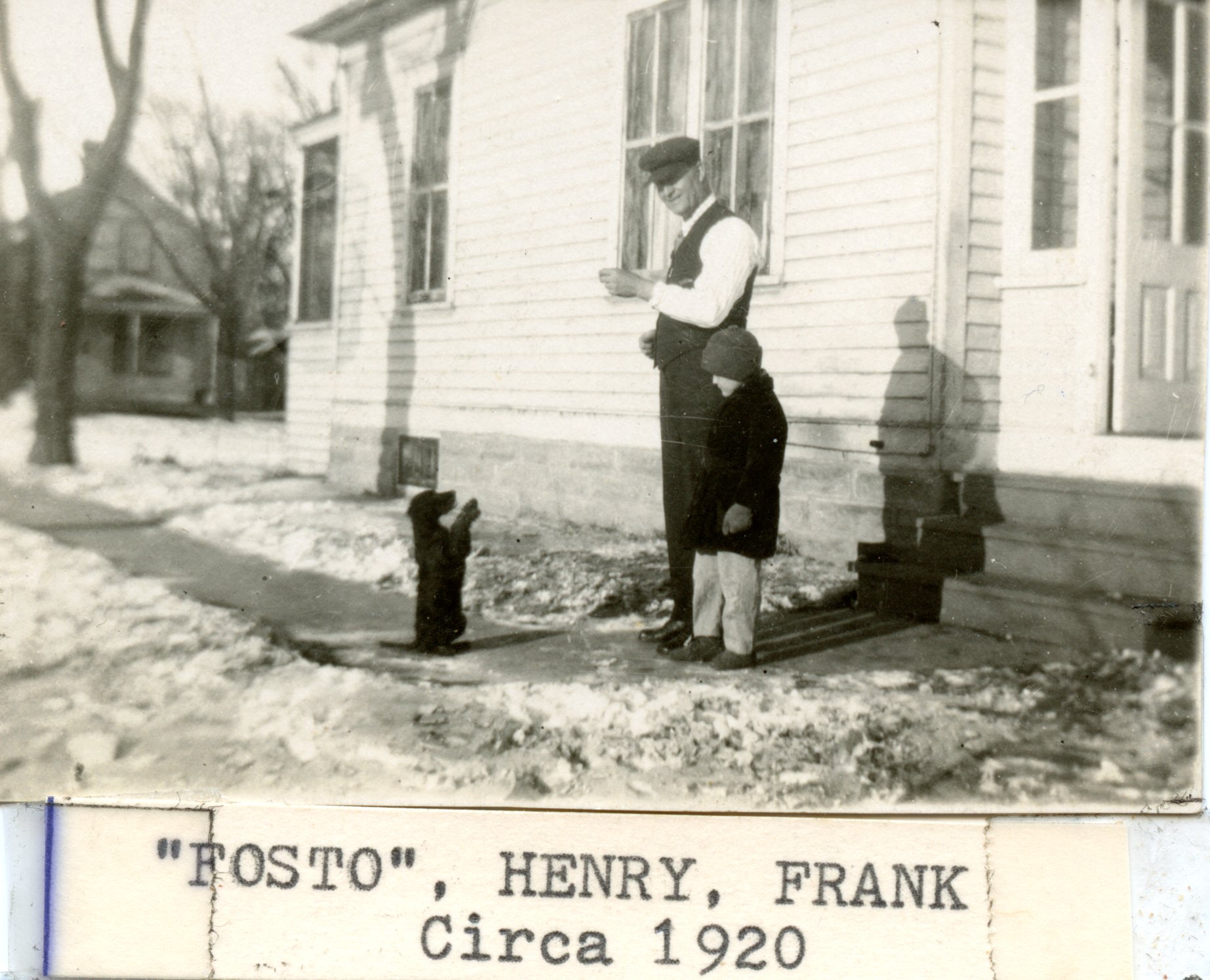 Dad provided the photo and his always unique labeling years ago.   Somebody took a picture of his Dad (my Grandpa) and younger brother (my Uncle) with the family dog, “Fosto” in what appears to be the beginning or end of winter in Grafton North Dakota.  Dad would say that every dog they had was named Fosto.  Grandpa, about 48 when this photo was taken, had spent a year on Luzon in the Philippines during the Spanish-American War, 1898-99, and he’d say that someone he’d seen called their dog Fosto, and he liked the name.  Grandpa was a story-teller, a rough hewn old lumberjack, so who knows.  Whatever, he’d trained Fosto and my uncle Frank was intrigued.

Today we’ll see part of the family for lunch.  Everybody is growing up, here and there in the world, so we take potluck.  Possibly I’ll copy this photo for the grandkids, for whom my Grandpa is Great-Great-Grandpa on the genealogy charts.  Time flies.

Thursday I was at the local sports center for my daily walk, and afterwards came back to take a photo inside the cavernous place. 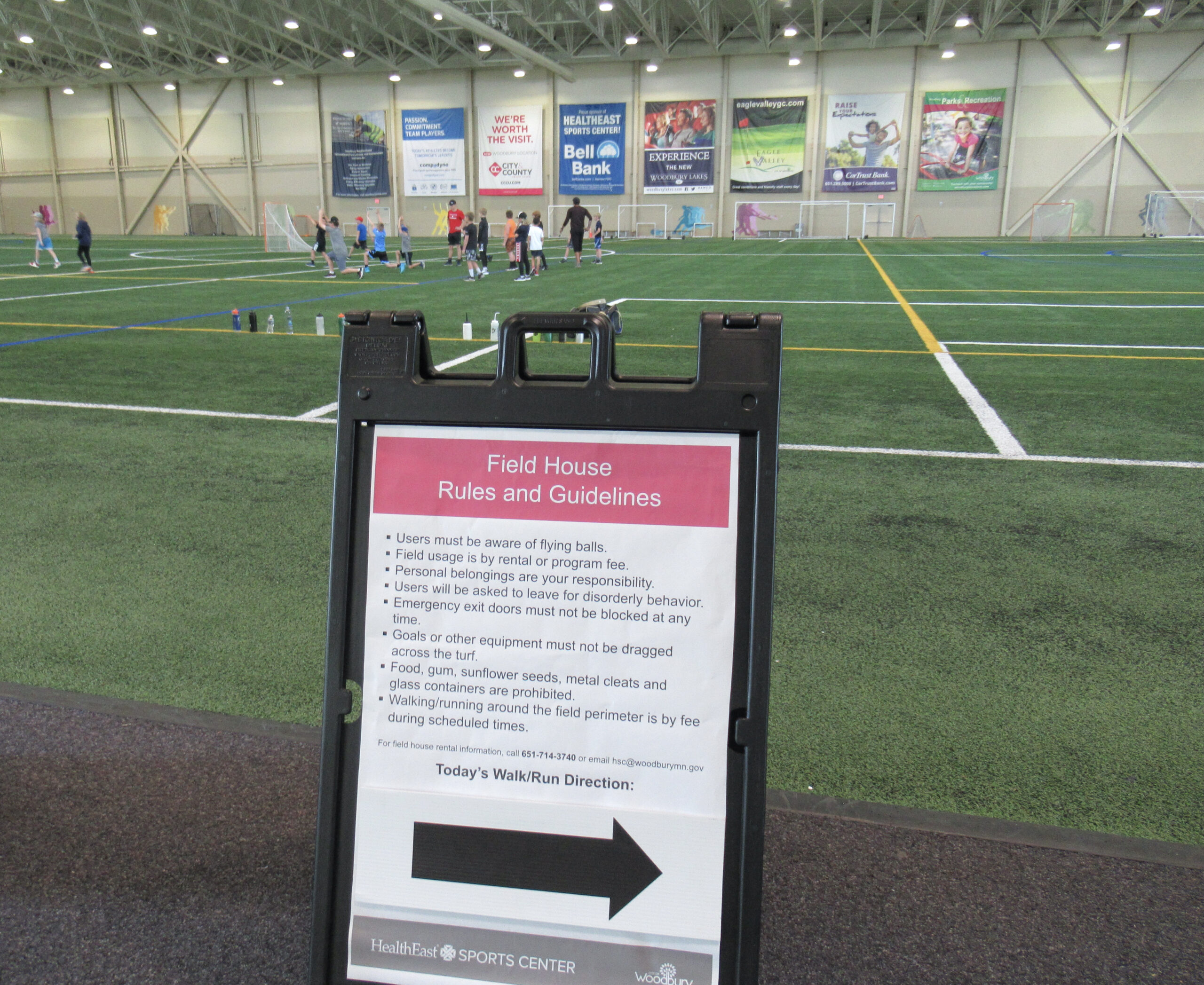 Usually, when I’m there, there are a few of we senior citizens making the rounds, and the field itself is empty.  Group events like these budding soccer neophytes start showing up.

This particular day there was one other guy making the rounds, same time as I.  Usually he’s there with his wife.  I know them as Jack and Joan.  Mostly our task is to make our goal number of rounds – mine 11, his 10 – so usually the conversation is “good morning” or such if our paths cross.

This day we chatted.

Jack and Joan have lived in my town since it was a rural township, rather than its present 60,000+.  He knew the farmer for which the Sports Center had originally been named – Bielenberg – and had seen the changes the passage of many years in a metropolitan suburb have wrought.

Probably he was running foot races back in those early years in a new subdivision a few miles east of 3M world headquarters.  Today, his 10 rounds, must seem like a hundred miles, though it’s only about two.  His doctor has prescribed walking as a desirable alternative to losing a limb due to vascular problems.

This day, Joan, always there with him, was absent.  Yesterday, making the rounds, an errant ball from a youngster hit her unawares, and the fall resulted in a visit to the emergency room, a concussion diagnosis.  It sounded like recovery was likely, but its the kind of things old folks worry about and young folks can’t relate to….

Jack commented about the coach this particular day, who he said was the hockey coach at a local high school.  As he was walking past the little pep talk the coach was giving the kids, Jack heard him talking about the importance of “character and responsibility” and he was much impressed by that wisdom being passed on from one generation to the next.

Just one day and one conversation about one life.

Happy Father’s Day to everyone whose role in any way today is passing along small or large insights of value.  We own a piece of that field called “life”.  We each appear, proceed, and after a while life as we know it ends.  Its up to us to make the best of what time we have. 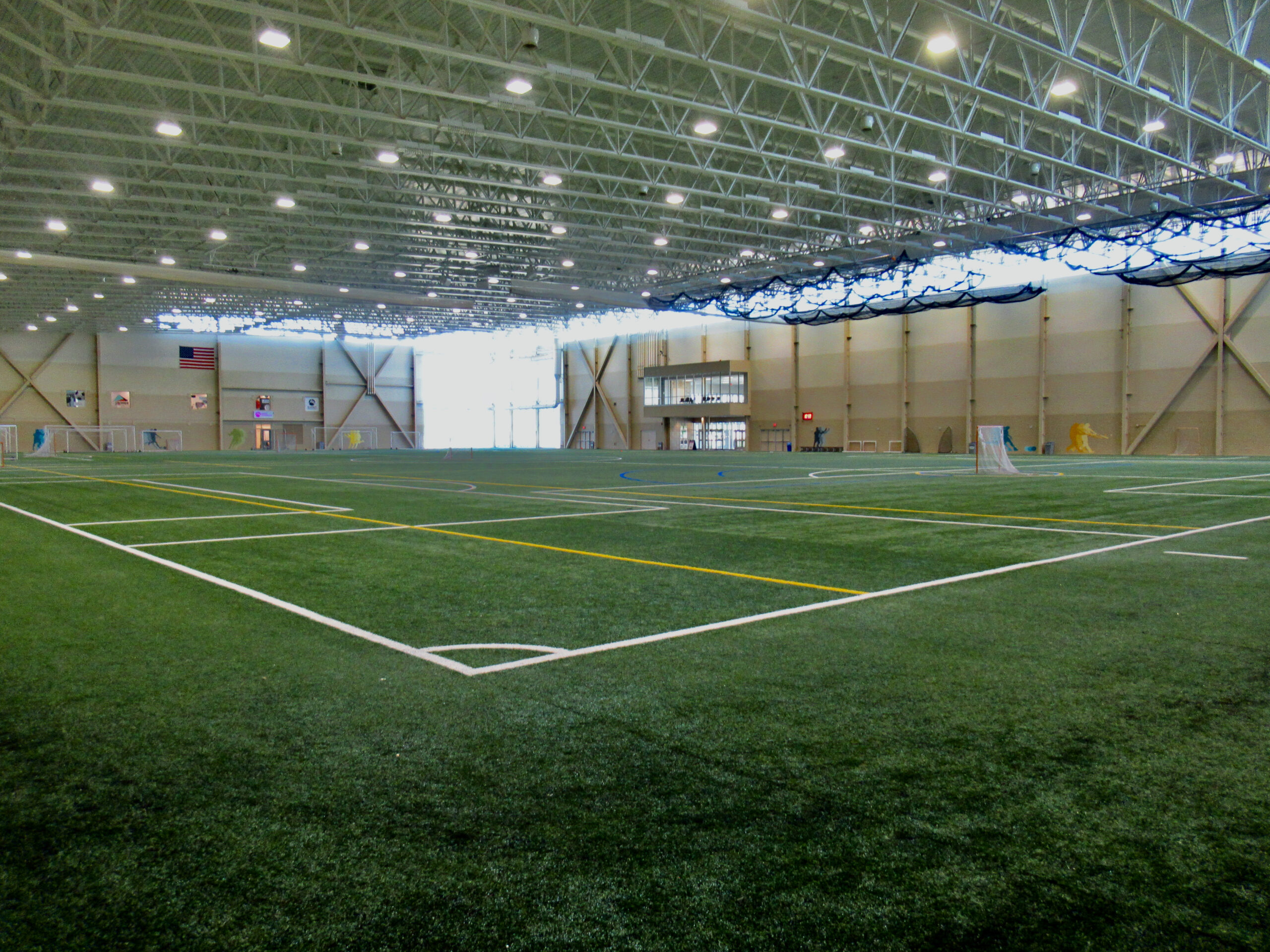 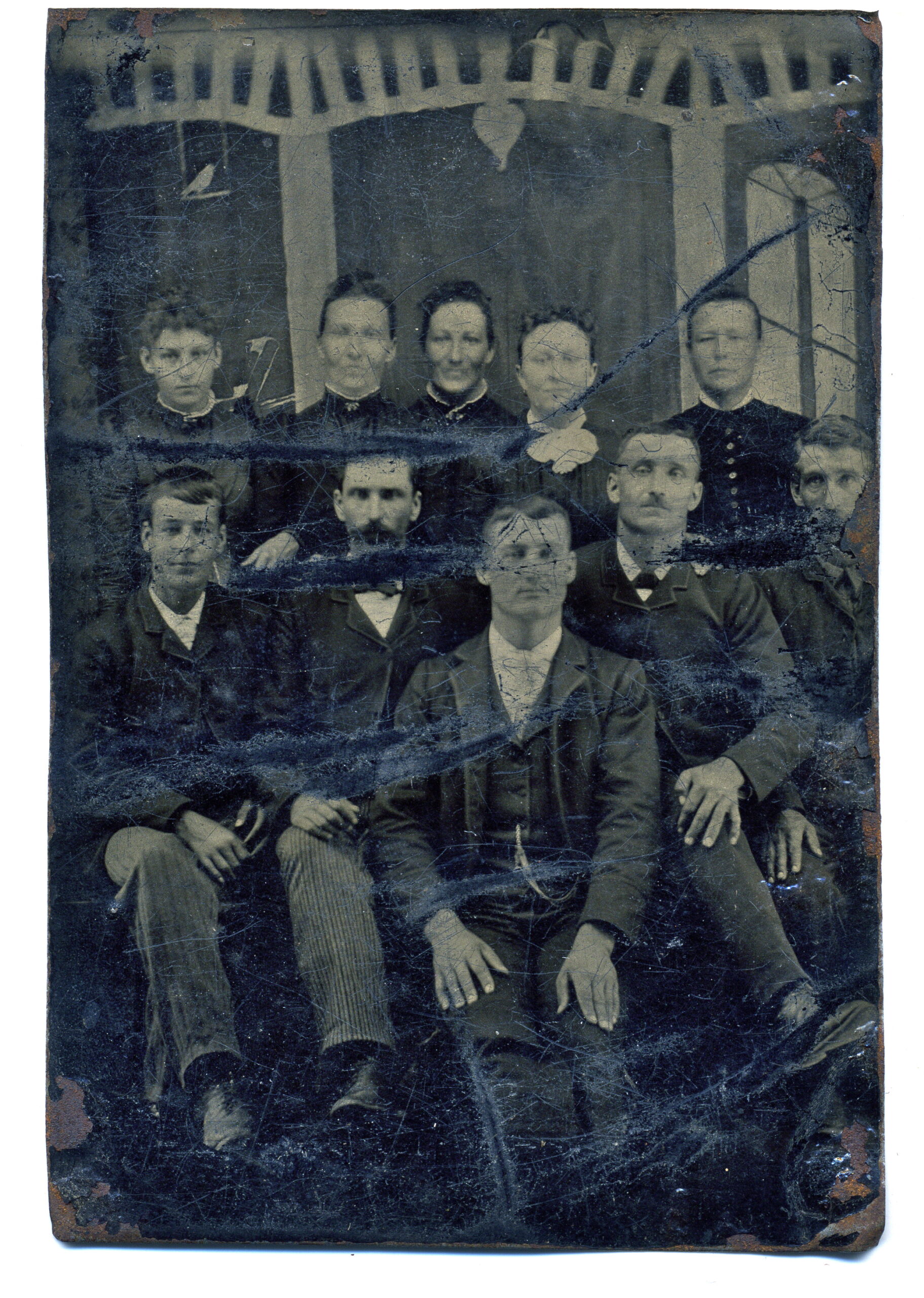 Tintypes like this one usually weren’t labelled. This one, likely 1880s, almost certainly featured my Grandpa, front and center, probably as a teenager, before he left for parts west.  His trip began in rural Quebec thence Berlin Falls NH as a lumberjack, thence to Dakota where he arrived in the early 1890s to join his brother, already there. It is not too much of a stretch that the man behind him may be his father, and the others his nearby family.  He is my own grandkids great-great-great grandfather!

Speculating about the photo…Doing family history for years, I know some things about Henry Bernard’s family, in which he was the youngest of a dozen, of whom few lived in his home area – St. Sylvestre QC – when he would have been growing up.  Only one of his siblings, his brother Joseph, migrated west to Grafton ND in 1888.  He was a young married man and came with his wife’s family, Gourde.  It is quite possible, totally unprovable, that Joseph and his new wife Dezilda, are in this photo as well, and the photo comes about 1887.  It is said that Gourdes, and their nine children, and two spouses, and two infants made the trip west, probably by immigrant train.   My Grandpa, Henry, followed a little later, I think about 1892.  I have a single later photo of Joseph with Henry, and perhaps more forensic work could see if Joseph is also in the photo.  That task is for someone else, if ever interested.  Dick Bernard June 20, 2021.