We’re in the midst of many serious troubles in our country, and it’s really important to be engaged in the struggle for sanity for our present and for our future.

Life is serious business these days in the U.S. and Covid-19 is only one issue, and at my little corner I’ll keep focused on important issues as I see them, nowadays basically political and economic.  But all isn’t dismal, and every day something comes in my mail, e- and otherwise that’s brighter.  Here are some positive things from just this past week.

Friday evening CBS evening news had a great piece, which I saw and Molly later passed along.  You can view it here.  Molly: “Wow–talk about creativity!!  And–put yourself in the place of the drivers! What would you do if someone came up to you in your stranded car  and said…”.hey, want a free covid shot right now?”

Dick: Friday, we took our 91 year old neighbor to get his Covid-19 shot.  The process at the clinic was very efficient and well organized.  It is good to see such a process in person.  My spouse, who was with Don, totally unexpectedly also got her shot, offered by the Director, and received with gratitude.  (I don’t qualify till after February 2 due to a recent unrelated vaccination.  But it’s coming.)

A few days ago,  a  homemade greeting card came from a Catholic Priest responding to a question I’d asked.  The card cover speaks for itself.  I don’t know the Priest; I was simply asking a question in behalf of the same elderly friend whose mother grew up in the Priests parish over 100 years ago. 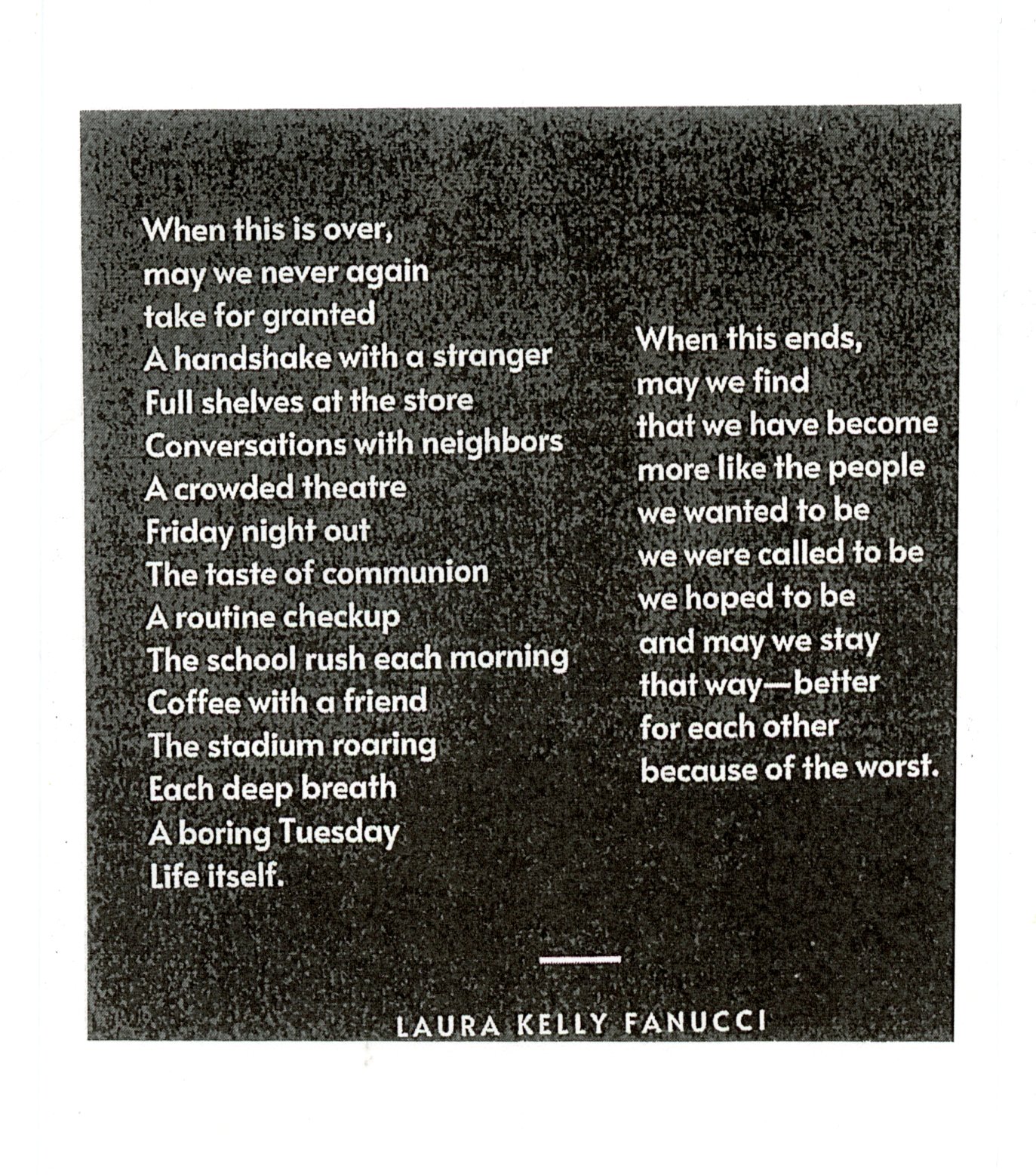 Such gifts are worth thanks.   I’m sure the author doesn’t mind her website being shared – that’s why she has a website.  Here it is.

And, finally, you can’t pass on this YouTube offering sent by a retired teacher.  Trust me.  It’s only three minutes or so.

In the same time frame, I was ‘talking’ on-line with a friend, Brian, in Brooklyn NY.  Brian sent along a drone view of his area of Brooklyn.  I asked to share, and he said ‘fine’, and here it is.  I told him that I had never been to Brooklyn, and only once to NYC, so Brooklyn exists only in my minds-eye.  Here is the accompanying note from Brian:

2) The First Church of God in Christ; and,

3) The Williamsburgh (with an “h”) Savings Bank Tower.

All are less than a 20-25 minute bike ride from our condo.  Actually the First Church of God is just a block away, catty-corner from Broward Park. It was built in 1923. And it’s strange: it used to be a synagogue.  Usually in Brooklyn it’s the other way, churches become synagogues.  (Up in Williamsburg, for example.)

I first became aware of St. Barbara’s in 2005 working at a nearby credit union.  I took pictures of it back then (in the video), and now have followed up. It was built in 1910.

And the Williamsburgh Savings Bank tower is higher than Hollie the drone can fly.  She can go only to 400 feet but the tower is over 500’ high.  It was the highest building in Brooklyn until 2010 in fact!  You’ll be able to see in the drone’s video how that has changed, now.  It was built in 1927.

THE CHURCH OF ST. BARBARA is a Roman Catholic parish church under the authority of the Roman Catholic Diocese of Brooklyn, located in northern Brooklyn, New York, in the Bushwick-Ridgewood neighborhood.

THE WILLIAMSBURGH SAVINGS BANK TOWER is a skyscraper located in downtown Brooklyn., Located at 1 Hanson Place between Ashland Place and St. Felix Street, the tower is one of the borough’s architectural icons. The tower was constructed from 1927 to 1929 as the new headquarters for the Williamsburgh Savings Bank.

Prior to 2010, when it was surpassed by the Brooklyner, the Williamsburgh Savings Bank Tower was the tallest building in Brooklyn at 37 stories and 512 feet (156 m) tall.  It is among the tallest four-sided clock towers in the world, and contains clock faces that are 17 feet (5.2 m) in diameter. Since 2007, the building has been converted into luxury condominium apartments under the name 1 Hanson Place.

Author Jonathan Ames created a “Most Phallic Building” contest which followed an article he wrote for Slate magazine, in which he claimed that the Tower was the most phallic building he’d ever seen. The character of the same name in his HBO show Bored to Death moves into the building in the third season.

The tower or its interior has been seen in the films Prizzi’s Honor, Catch Me if You Can, Going in Style (2017 ), John Wick, the music videos “Empire State of Mind” and “No Stylist”, as well the TV shows Pan Am, Law & Order, Bored to Death, White Collar, Gossip Girl, and Boardwalk Empire.

I shared with Brian a snapshot of my own: one by my brother, John, via drone, of one of our growing up towns, Sykeston ND, the other taken by myself enroute to or back from the Statue of Liberty in late June, 1972, 49 years go.  The Twin Towers were just being completed then, and as I recall only one had opened. 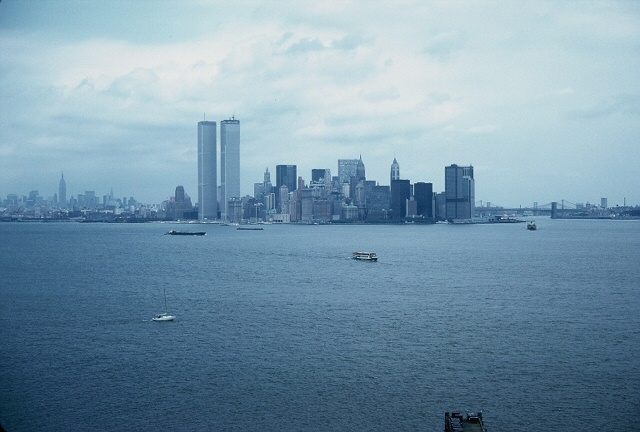 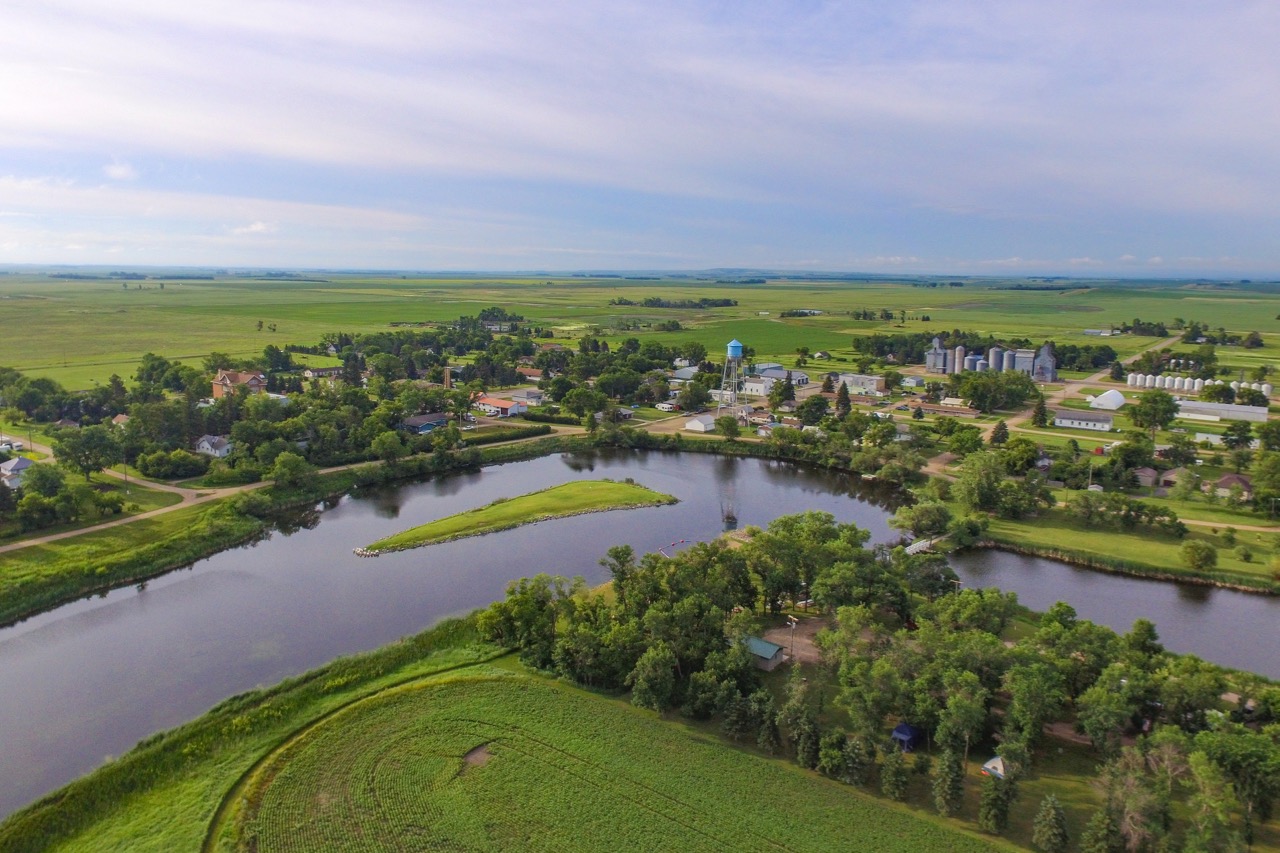 POSTNOTE AND PERTINENT: I would encourage taking the time, later, to read this post I filed Jan. 27, relating the upcoming impeachment trial.  It is comments from several persons about the current state of affairs in our United States.