We haven’t seen the just-released blockbuster “Avatar” as yet. This review has increased my interest in actually seeing the movie.
Of course, Avatar is not “real”, as in reality, but sometimes films like these are helpful to think more seriously about the longer term. It apparently is a fantasy encouraging people to really look at a new reality.
Coincidently, during the month of December I have been reading an on-line book written by my friend Loren Halvorson. A while back, I posted his book “Hidden Roots: the Basis of Social Regeneration” on this blog. The book is accessible in its entirety here.
On page 51, in the third chapter, Loren succinctly described where we’ve been as people (First and Second Settlements), and where we might be heading (Third Settlement), since we have no option within the First and Second Settlement rules. These are his words:
“The “First Settlement” is the pattern still found among the so-called “Primitive” societies which live close to nature. For them nature and grace are not in opposition. The rhythm of their life style is set in accordance with their natural environment. For such communities the earth and all its forms of life was part of a family. Mother Earth nourished all the creatures who were related. Therefore,one lives gently on and with the earth and with all its forms of life. Humans are neither superior to nor “over against” other life forms but members of the family. I have in mind not only the Indians, the “Native” Americans, but also Spanish speaking peoples and Africans who preceded most of the white settlers but who viewed land differently than the land owners.
The “Second Settlement” came with the modern age that viewed nature as an object to be exploited. Nature and grace were in opposition, even violent opposition at times. Waves of immigrants set out to conquer nature, including nature’s people, the “Primitive peoples” (Now called the “Third” or “Fourth” World). In North America this happened rapidly with the Western movement of pioneers who brought their old community and culture with them to a new land. They brought with them their “little publics” with which to undergird the establishing of a larger republic. When other settlers appeared and crowded their space they moved farther West. As long as an open frontier was available, this settlement pattern persisted. Some see this period ending with the Civil War when the Western frontier was closed and Paradise was lost. But I believe the mentality lingered on. Even after the open spaces were all settled the next frontier to be conquered became the rich resources of the land. Somewhere around the end of world War II the last wave of settlers found themselves crowding into southern California with nowhere else to go. It is no surprise that Watts in Los Angeles was the first urban area to go up in smoke. That was the end of the American dream of private space away from strangers. The “Second Settlement” came to an end.
The “Third Settlement” began with the burning of Watts. people began to recognize that there was nowhere else to flee from one another except the outback in Australia or Antarctica. The “third Settlement” does not mean geographic exodus to another place as much as it challenges us to remain in place in an increasingly urban society and build new community out of the differences of race, religion, sex, economic class, age, culture, marital status:all the difference that had previously separated us. Certainly it cannot mean another Oklahoma “land rush” for this time we must proceed at a pace commensurate with the patterns of the environment. Land is not to be conquered but rather to be lived with as a vital member of the wider community. The settlers of the “Second Settlement” rushed too quickly into new territories ignoring the lessons to be learned from the earlier inhabitants and creating tools before they knew how to use them or understand the consequences of their use (e.g. nuclear power). it means to live with the land and deal with its resources not as owners but as partners. it means to view the land to its various life forms as part of the community with “liberty and justice” for all that make up the shared environment….”
Halverson’s book was written in 1991, and his key concepts were discussed by him as early as the 1960s. It is far more current now, than it was then. He wrote with a keen mind about the future in which we are now living.
There is rich food for thought and conversation within his perception of stages.
Our collective problem, in our still affluent society dominated by things like advertising and mass media and wants vs needs, seems to be that we prefer to live in what has for some time been a fantasy “Second Settlement” mind-set…and, practically, “Second Settlement” no longer exists. We’ve killed it.
Movies like last years “Wall-e”, and, apparently now, “Avatar”, are trying to put a new and more constructive spin on fantasy.
Halverson’s book is well worth a read, and it’s accessible right here.

UPDATE February 18, 2010: R.I.P. Loren Halverson. Loren passed away February 15, 2010 at 82. Obituary and funeral arrangements.
Moderator:  This is a first for this blog – a book, online.  163 pages, eight chapters.  Do take a stroll through the chapters, in two parts, at the following web addresses:  #mce_temp_url# and #mce_temp_url#.  The book appears here with author Loren Halvorsons permission.  It is Lorens gift to humanity.  I ask that you consider sharing this book with others who you feel may value reading it.
I’ve known and respected Loren for the past eleven years.  I met him during a powerful three and one half day workshop* which I found very meaningful and life altering, and he, a fellow participant and senior to me, was one of many participants who inspired me to grow beyond my own status quo.
Out of the blue last Sunday came an e-mail from Loren.  I asked, and he gave, permission for me to pass along the contents of the e-mail.
“[Y]our note…came at a strange, or rather special moment in my life when I am undergoing radiation treatment for prostrate cancer that has been under control for ten years but now is spreading rapidly.  Ruth and I have decided to transform whatever time we have left from dread to delight by inviting long time friends and family to “third cups of tea”.  Already it has been a magnificent experience suggesting that life lurks in death, something I had formulated academically but not understood existentially until now.
I am also using this time to deposit courses I taught at Luther Seminary for thirty-two years in places where it might take root and produce fruits beyond anything I might have imagined.  Your note reminded that you might be just such a depository!  fortunately modern tools make this possible. A friend at the seminary (one of several Roman Catholic faculty we now have) has put things on line for me.  One is a course I taught the last ten years on base communities which arose not only out of my own field of ethics and society but out of years of living in an intentional community, the ARC.  [That material is at the referenced websites above.]”
Loren references “the ARC”.  ARC (Action, Reflection, Celebration) Retreat Center is  a wonderful place north of the twin cities of Minneapolis and St Paul #mce_temp_url#.  The dream of Ruth and Loren, ARC opened its doors in 1978.  I was privileged to participate in a retreat there in 2005.
As I write, I remember the summer of 1998 when Loren and I were in the workshop together.  During that year, Mitch Albom’s book “Tuesday’s with Morrie” was a run-away best seller.  I purchased the book as a gift for our instructor, and she deeply appreciated the gift.
It occurs to me that at the time I met Loren, he had not yet begun his walk with cancer; now, 11 years later, he is offering to others the same gift Morrie Schwartz offered to Mitch Albom.
I also remember a particular place that captured me at Loren and Ruth’s ARC Retreat Center in May, 2005.  It was a simple bridge across a creek, and it was for me a metaphor for life itself.
I’ll think of that bridge as Loren takes what he feels is his final walk through life.  He’s given a great gift, and he wants to share it with you, and you to share it with others.
Thanks, Loren.  And Peace. 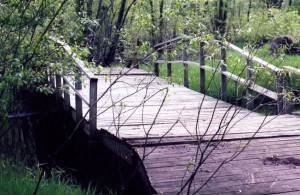