POSTNOTE July 23, 2021: Just Above Sunset on the upcoming January 6 hearing: Ending the nonsense.

Published July 21, 2021: Some quick thoughts on the latest piece of breaking news today.  I’d like to see comments.  I may add thought later as well.  Take a look.

Heads up – I will probably do three other posts in the next three days on assorted topics.  I’ll not publicize them to the list, but take a look if you wish.  Thereafter I’ll be out of area and off computer for several days next week.  Have a good one. 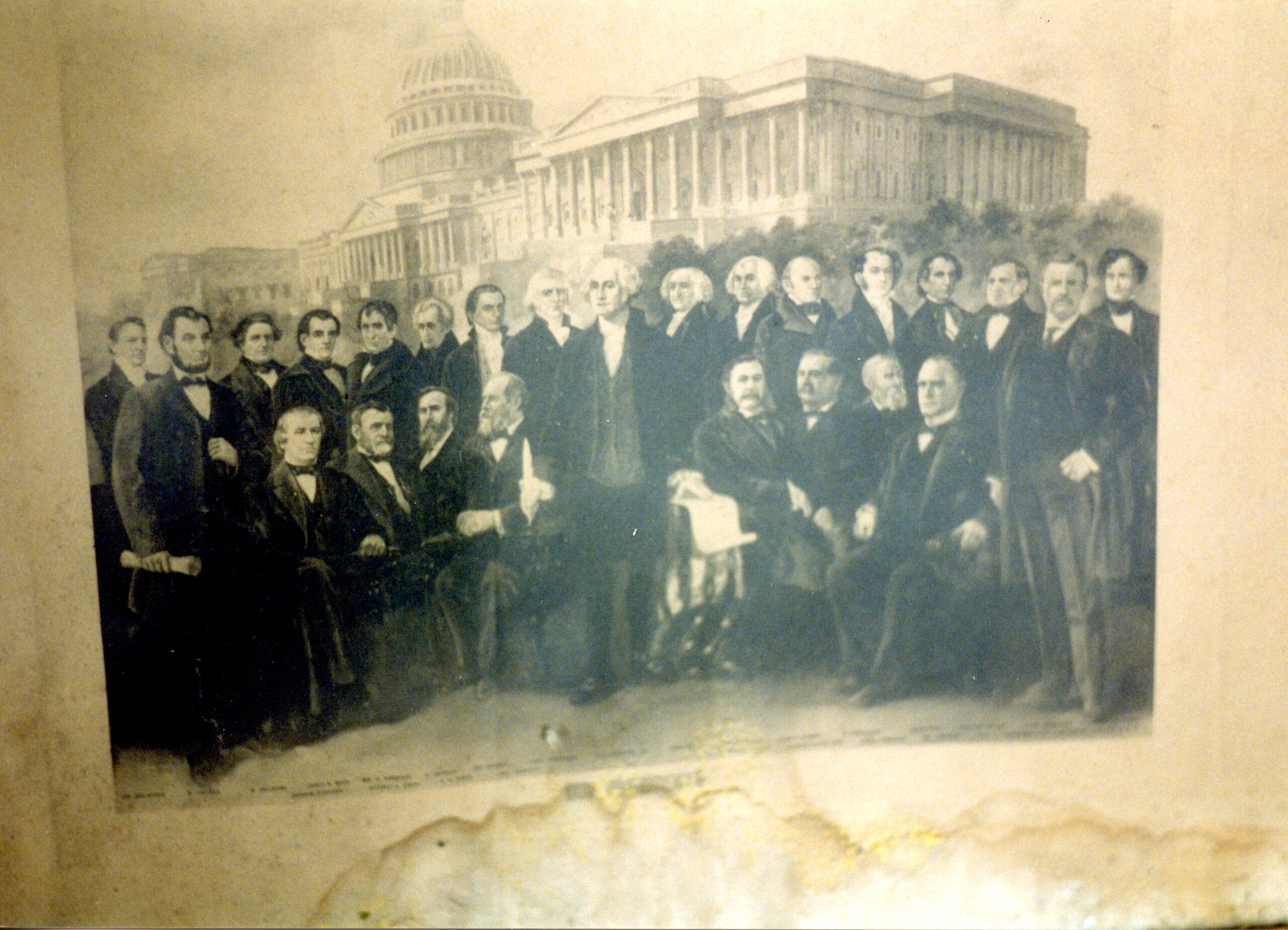 A 1905 poster of the U.S. presidents in front of the U.S. Capitol. The last president pictured is Theodore Roosevelt.

Every day, most every day, these days, there is some piece of “breaking news” or other.  My apologies if I use the wrong nomenclature to describe the groups proposed to fact-find January 6, 2021.

Today is no different.  Today’s House Republican leader pulled his five nominees for the bipartisan committee investigating the January 6 insurrection, because the designated evil one vetoed two of the five nominees.

Previously, of course, Senate and House Republicans were against a non-partisan commission to investigate January 6. The House Republicans were against the bipartisan committee even though the proposal had all the components required by the minority leader.  One House member, a very conservative Republican leader, has bucked her caucus on this immediate issue….  All the rest plays out in the media.  I don’t need to embellish.

Today is another occasion for me to brush off a tactical organizing outline which was used against an organization in which I was a leader back in 1974, 48 years ago.  We were then, and remained, the majority group, but 1974 was the first time we faced a challenge.

A person who’d been involved in the opposition back then, gave me his notes on “organizing tactics” in about 1989, and the one page piece of paper pretty succinctly describe what is happening today, big-time, in particularly “conservative” political organizing.

I could simply offer the one-page pdf of the tactics used, but that by itself would deflect from the issue in today’s Congress.

There were 17 points on the sheet, most of which could apply here.  I pick the ones on the page that most jump out at me today.

“Our job is…organizing…we exist to organize.”

“Don’t try to solve the problems…Take advantage of and create problems….”

“P.R. everything – disrupt – confuse – challenge – display anger.” (This is what I emphasize, today.)

“Target unpopular [leaders of the opposition]”. (The corollary, of course: do everything possible to make them seem unpopular.)

“Look for corridors to organize.  Expressways connect major towns and cities – you should do the same.”

“Find the angry people, the disenchanted.  They will be zealots for our cause”

“Blame [the other side] for every current and historical problem.”

“Talk to as many…one-on-one, as possible.  These individual “hits” are crucial.”

“State the problem, blame the [other] and promise the opposite.  Offer nirvana.”

“Publish everything – spread lots of paper around.” (Of course, this was years before today’s technology.  It was harder and more dangerous to lie back then.  Pieces of paper were evidence.)

“Try to get the [opponent] to react to defend themselves.”

“Always stay on the offense – never defend a charge or challenge…Always move quickly from issue to issue.”

“Brag about other [places] where we are the representative.  Do it with mirrors.”

“Challenge to an election at every opportunity.  Keep the situation disrupted and the [people] split.”

“Spread the battle cry, “Give us a chance, just give us one chance”.

In 1974, we were blitzed with all of these tactics and, frankly, we were clueless.  In a moment of desperation, one member – it may even have been me – suggested that we go on the offensive, rather than staying on defense, as we had been.  It was an inadvertent act of genius!

We were ripe for being defeated that year for reasons that had nothing to do with what we did.  If you reread those tactics, they are exactly the same as relied on now by the T-party.  Most everybody wants something for nothing; but something for nothing is utterly without value, as ultimately we all have experienced in our own lives.

In 1974, the election was held, and my recollection is that we won with 60% of the vote.  It was a large unit with many work sites – probably well over 1200 members.

I didn’t learn about the specific tactics (above) till 15 years after the election.  Read them again and internalize them.  They are and should be weapons against the people who now rely on them, again….  Back then, the tactic worked…for awhile.  Then it didn’t….  Keep that in mind.  You can make a difference.

Expect to see the picture which leads this post quite often.  It will probably be connected with a blog about the January 6 hearings, or similar.

My opinion about what Nancy Pelosi did?  I surely understand what she did.  In personal experiences in my work life, I had no problem with differences of opinion…I really had no choice.  But today is a different day especially from media standpoint.  People can choose, and do choose, where to get the messages that validate their point of view.  Only Nancy knows why she made the decision.  The Republicans decided to exclude themselves and so be it.

from Peter July 21:  Not a long comment, but just this: as a student of Japanese strategy
for, gosh over thirty years now, I know that strategy and the sword are one.

This came home to me again when our next headmaster gave a talk on a
coaching website about our late Sensei’s book, “The Way and The Power.”
He described a negotiation in which, each time the opposition raised an
idea, they were attacked personally, ad hominem. Again, and again, and
again. No counter-argument, just dismissive and disdainful insults.

He was making the point about strategy, which is a word found on most
business cards and web landing-pages in Washington, DC, these days. That
audience is prone to mystical beliefs about strategy, that it is a Force
for Good, or at least confers some kind of mojo.

That was when I realized (not for the first time) that this is exactly
what the sword is all about: regardless of whoever has a grip on the
handle, the blade will cut whatever it touches.

Context is decisive. When winning is all, we tend to bend ourselves out
of human shape, and assume the shape of whatever it is we think we’re
struggling against.

Just dedicating our lives to winning may, as somebody recently wrote,
get us a bed in a fantastic nursing home.