You won’t see an abundance of words in this post, but behind the links are lots of possibilities for action, especially if you have any interest in Peace and Justice Issues.  An earlier post on the Golden Rule, Sep. 12, is here.

Last night (Sep. 15) we were at a great twin cities kickoff for the Golden Rule sailboat, which starts its 1 1/2 year Great Loop Voyage in the Twin Cities through September 30, thence down the Mississippi and onward to the east coast, the Great Lakes, and down river again.  All Twin Cities information is here: Golden Rule Sep 2022.  Sponsoring organization locally is Veterans for Peace #27.  I’m a long-time member.  The local made a substantial financial commitment to bring the project here, and contributions are solicited to the Golden Rule Project.

Helen Jaccard and Captain Kiko, and others, put on a very stimulating program.  Their particular issue is Nuclear.  Follow their link for more. 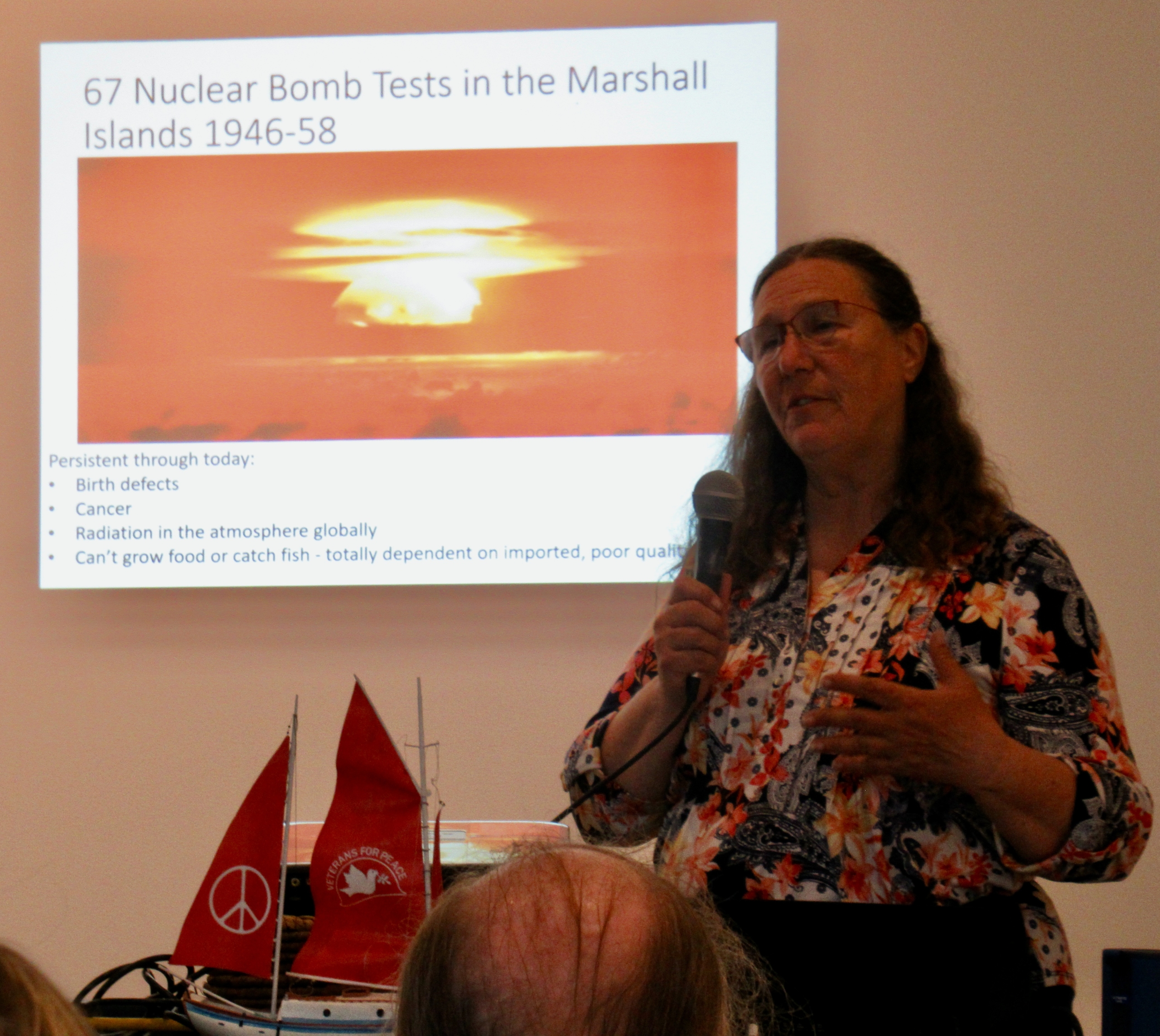 Reference is made to Twin Cities Nonviolent, and to Peacestock 22 in Red Wing.  Their links are included.  I’m also including the Agenda for Peacestock 22, which I attend on occasion: Peacestock22.  I think the first one I attended was Peacestock 2 (then called “Pigstock” because it was sited on a farm in Western Wisconsin.   It is always worthwhile.

Unrelated, but really completely related, was another program I attended the night before Golden Rule.  It was at the Headquarters of Minnesota’s Red Bull Division, and the occasion  was rolling out plans for an expanded museum at Camp Ripley, between Little Falls and Brainerd. 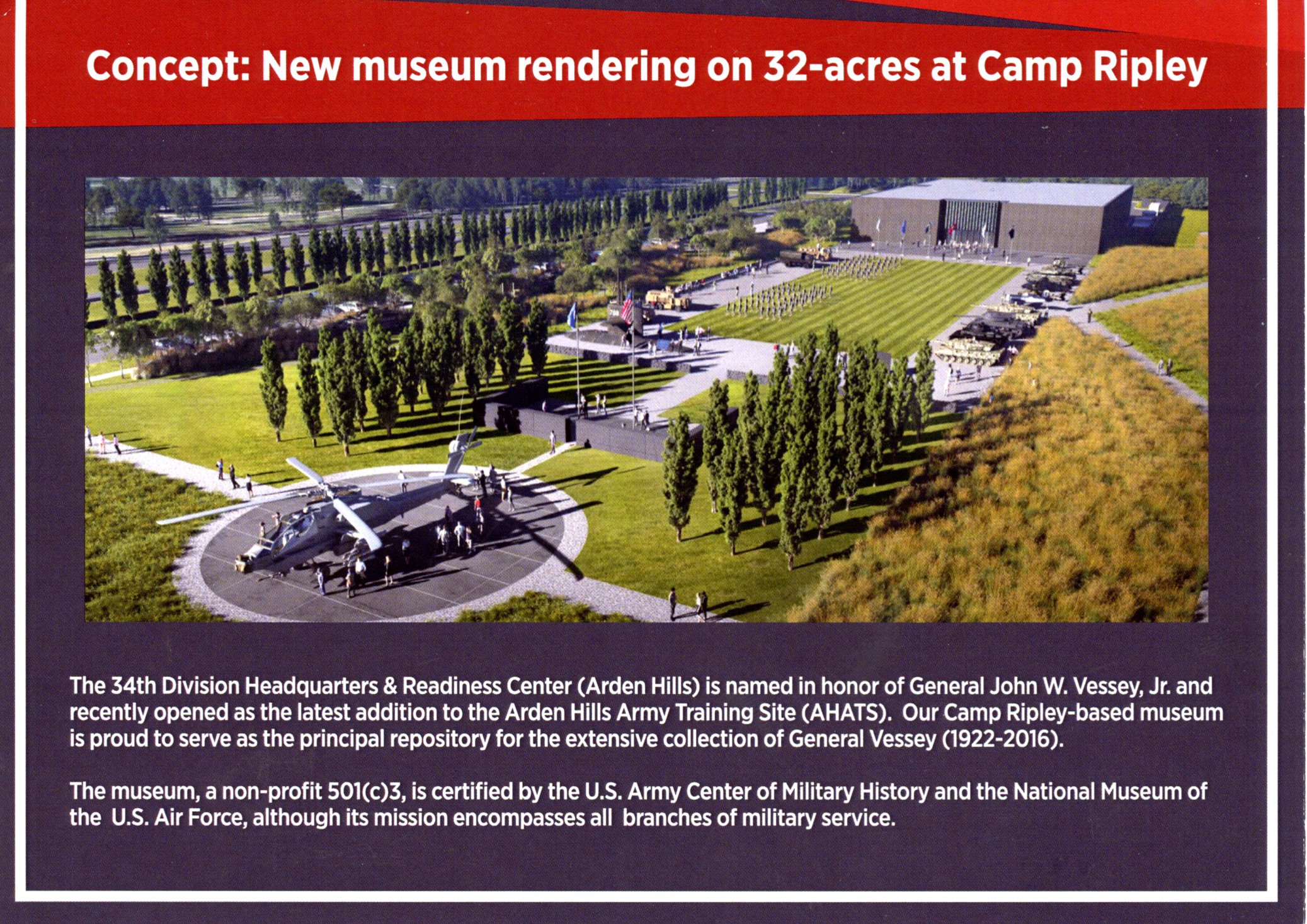 I sometimes puzzle, maybe even exasperate, my peacenik friends, because I am every bit as anti-war as they are, but on the other hand, as they know, I come from a family with a very long history of military service, including myself.   Having said that, my feet are firmly planted on the Peace side: war accomplishes nothing long term (at the same time, as long as there is evil around humanity, there will be war….)

I see no contradiction at all.  Veterans for Peace is full of veterans, these days mostly Vietnam era.  People who served, honorably.  I include in this group, conscientious objectors and protestors, all witnesses, as were the active military, in the contradictions of War as a supposed instrument of Peace.  Everyone is a player.

I will not change the debate here, only I choose to raise the issue!

The speaker at the Camp Ripley event was author Elliott Ackerman, whose first job out of college, in 2003, was U.S. Marines, thence further government service, including five tours in Iraq and Afghanistan, through the withdrawal from America’s longest war in Afghanistan in 2021.  He knew the turf, first hand. I had purchased his book prior to his talk, and it is worth the read, regardless of ones point of view.  It is available at bookstores: The Fifth Act, America’s End in Afghanistan.

I thought the talk, in conversation format, was well done.  The biggest audience response by far was Ackerman’s lament about the lack of civility afoot in this country at present.

“Teasing”the Book, each Act is preceded by a brief quotation, as follows:

I title this post, “All hands on deck” for a simple reason.  If you care, you’ll be there to help sail the ship of our planets survival.  If your gig is peace and justice, there is lot to be considered, here.

It was THRILLING to watch Goldie go back in the water after her big adventure by truck from California to Hudson, Wisconsin.
Here’s the video.
There were SO MANY people who helped in so many ways!
Captain Kiko, Helder Herrera and many others helped get the sails down and booms off.
Captain Kiko and I “undressed” the masts and prepared them for the truck by covering them with carpet.
On the Wisconsin/Minnesota side, we had Captain Kiko, Mary McNellis, Mike McDonald, Dale Opsahl, Craig Wood, Dave Logsdon, Steve Gates, First Mate Steve Buck,  Tom Bauch, Gil Macguire, Justin Farner, Collin Meuller and others who planned events and volunteered at the marina.
We painted the bottom and touched up the top sides andrub rail trim, varnished the pin rails and light bars, and did a lot of work on the masts!  We repaired what was needed and gave the masts and booms a great new paint job.  We had a really great professional get the propeller bent back to perfect shape.
Steve Buck and Gil Macguire are working on the electronics.
In Peace and Friendship,
from Rebecca:  Dick: A very thoughtful piece on peace and military honor as well–no contradiction there. My small group called Vote Climate is doing something for the 12 Days of Nonviolence this year-I will send you something separately on that (Look for it, regarding a Sept 30th–zoom call with Bill McKibben–an eventbrite invite– and, on Oct 1, a live event called “Hands across the Mississippi” at the Lake/Marshall bridge and the Danish Am Ctr at the Westend of that bridge).
https://thoughtstowardsabetterworld.org/wp-content/uploads/2022/04/thoughts-300x138-1.jpg 0 0 dickbernard https://thoughtstowardsabetterworld.org/wp-content/uploads/2022/04/thoughts-300x138-1.jpg dickbernard2022-09-16 11:29:322022-09-17 05:39:42“All hands on deck”
2 replies