POSTNOTE Jan 14: Ruthanne notes this link, which I would also recommend. Rebecca sends this from Boston Globe.
*
Each morning, including this chilly day in Woodbury, as I get into and out of my car I see two lovely Haitian ladies (photos below). A member of our Fonkoze study group took these photos at a market in Ench (Hinche) in central Haiti in the spring of 2006. I had put them on a poster for a church display back then, and truth be told, they’re on display now only because I didn’t want to throw the poster away, even though I doubted I’d ever use it again. I’m very glad I kept it. These ladies help center me each day. 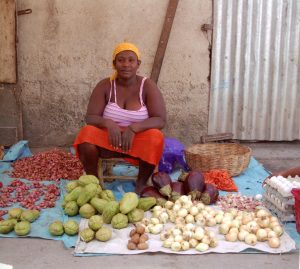 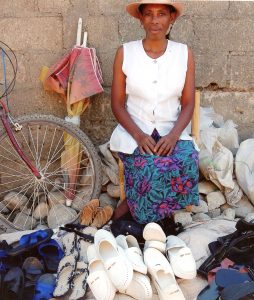 Now I’ve scanned them, and the poster is back where I found it. They are very elegant representatives of that place less than two hours east of Miami, Florida.

I only went to Haiti twice, both on study trips, in December, 2003, and again in April, 2006. They were historical times, both of them.

In 2004, I put together a map comparing Haiti to Minnesota (many thanks to Paul Miller for his assistance), and for getting me to go to Haiti with he and five others in the first place: 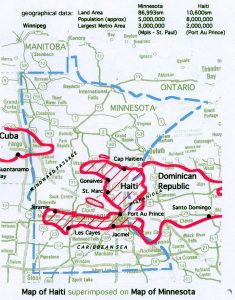 Back then, I also put up a web presence about how I was coming to understand the small and impoverished place, our neighbor in the Caribbean. The site remains there, maybe a bit dusty, but perhaps a few people might want to wander around its nooks and crannies, now many years later. Here’s the link. Yes, the link is outdated, but still pertinent.

Likewise, here’s the link to some writings I did back then….

Suffice, we Americans have a rather inglorious history with Haiti, beginning with our refusal to recognize the country when the slaves revolted against France in 1804 and declared their independence. We were rather frightened by this, and these freed slaves have been punished ever since.

Best we start seeing Haiti, and those other “shithole” countries so summarily dismissed.

In many ways, they are superior to our own. 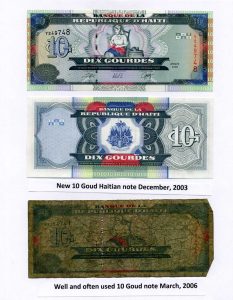 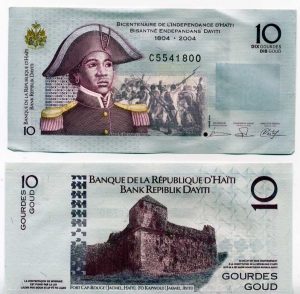 COMMENTS:
from Rebecca: Thinking about you and your Haiti trip compatriots today, about Ruben, April, Joelle, etc. (our local friends) and all the beautiful people I met in Haiti with Witness for Peace back in 1992-3.

from Ezildanto: Thank you for sharing Dick. Will circulate.
Wish the headlines were about the shitty imperialism, US-EU occupation, and neoliberal plunders that contains the countries that get TPS in poverty and dictatorship. Be well, è

from Alan: We have been there three times. I don’t remember exactly what years, but the first time was when we went to a Club Med resort, it’s name was Magic Haiti, and it was truly magic. We were there a week and met the head of the largest bank of England who invited us to visit his home if we ever got to London. Lou Ann, I would say the first or second day that we were there saw a poster advertising the CITIDAL. She said that she had read about it, but there was no way to get to see it, except the poster said there was.

Now as far as a shit hole goes, I think that explains the brain of Donald J. Trump. The people that we met in Haiti were friendly. The two times that we were there we stayed at the Hotel Montana. We did have dinner one night at the Grand Hotel Olafson. Haiti had a wonderful Tomato Ketchup that was produced there and I tried to get help from our government so I could import it and sell it to grocery stores but I got no help. We both had 3 good times in Haiti meeting many of the locals.

from Paul: small gesture of resistance / donate a toilet in honor of Don Trump 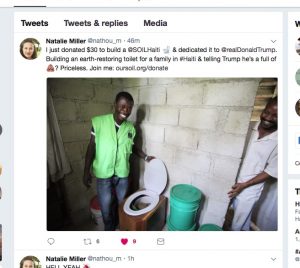 from Mark Schuller: I’m still speechless. Here’s the best I can come up with.
There are lots of powerful words already said. H-Net has compiled several, including powerful Miami Herald op-ed by award winning Haitian author Edwidge Danticat.

from David: Thanks for the post. As you know, ever since the last election, I’ve advocated that voters had many reasons for pulling the lever in favor of Trump. A vote for Trump doesn’t define a person. If Democrats hope to win those voters back, they need to offer something that addresses their needs. The Democrats have allowed themselves to be cast as the party of coastal elites who are quick to put down “non-college-educated-white males” as a “basket of deplorables.” If you question any progressive position you are immediately identified as a racist, bigot, homophobe, zenophobe, etc. At that point, conversation ceases.

That being said, Trump’s latest “shithole” remarks and the general silence from the right in response, makes me wonder where we’ve come as a country. If Haiti, and, according to Trump, all African countries, are truly “shitholes,” isn’t that MORE reason to allow their citizens to come to the United States? What’s truly being said is that we’re happy to take in white folks and keep black and brown folks out. The very definition of racism. A Fox News commentator stated that Trump was only saying publicly what many Americans believe privately. Has our country truly come to that? I hope not. In his January 12, Washington Post commentary, Philip Kennicott, makes the case far better than I when he writes about our growing indifference to human suffering.

One would think that merely pointing out the awful things that Trump has said and done would be enough to turn the electorate against him. But, we knew all of those things on election day in 2016 and he still was elected president. Clearly, the Democrats need to find a different strategy than merely, “Trump sucks, vote for us.”

from Mary T: This is appalling – don’t know whether you have heard of it yet, but this article was the first report I have seen.

Oprah, and N. and S. Korea. Peter Barus: The Great and Terrible Oz Does Another Lucy
Scroll to top