Today, Kyong Juhn, a Korean born photographer from Rochester MN begins a 323 mile walk from Rochester to Bemidji to mirror her mothers 323 miles walk from North Korea to South Korea years ago.  The May 2 article in the Rochester Post Bulletin describing the Minnesota walk can be read here.

Here is Korea in perspective, from my 1960 Life Pictorial Atlas.  (Pyongyang to Seoul is about 120 miles “as the crow flies”.) 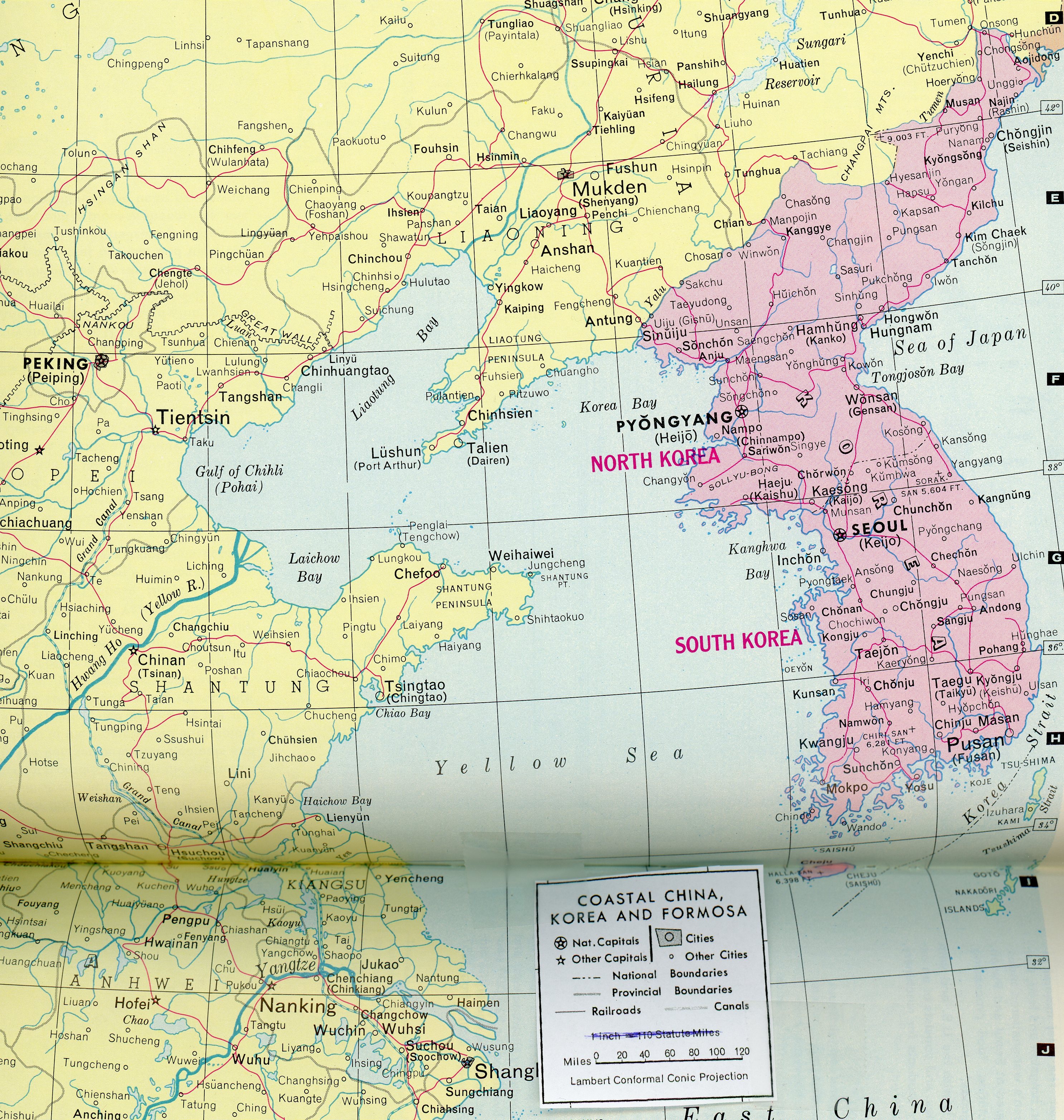 The route and timeline are pretty straight-forward, details about the Twin Cities “leg” follow the illustrations (below).

Kyung Juhn’s is a walk for peace and hope and the Twin Cities area Veterans for Peace Chapter 27 is providing its”Harold and Louise Nielsen Peace Bus” bus as “sag wagon” for support.  She hopes to find shelter along the journey  She will stay in motels if necessary, but she would like to stay with folks along the way as a way to bond.  Those wishing more information can call Vets for Peace President David Logsdon (612-203-9768).

David says “The route has been considered with regard to a balance between visibility and safety.  We expect this to be a true adventure, both challenging and regarding.  the time for peace is now!”

Again, below the illustrations are specifics about the Twin Cities “leg” of the walk. 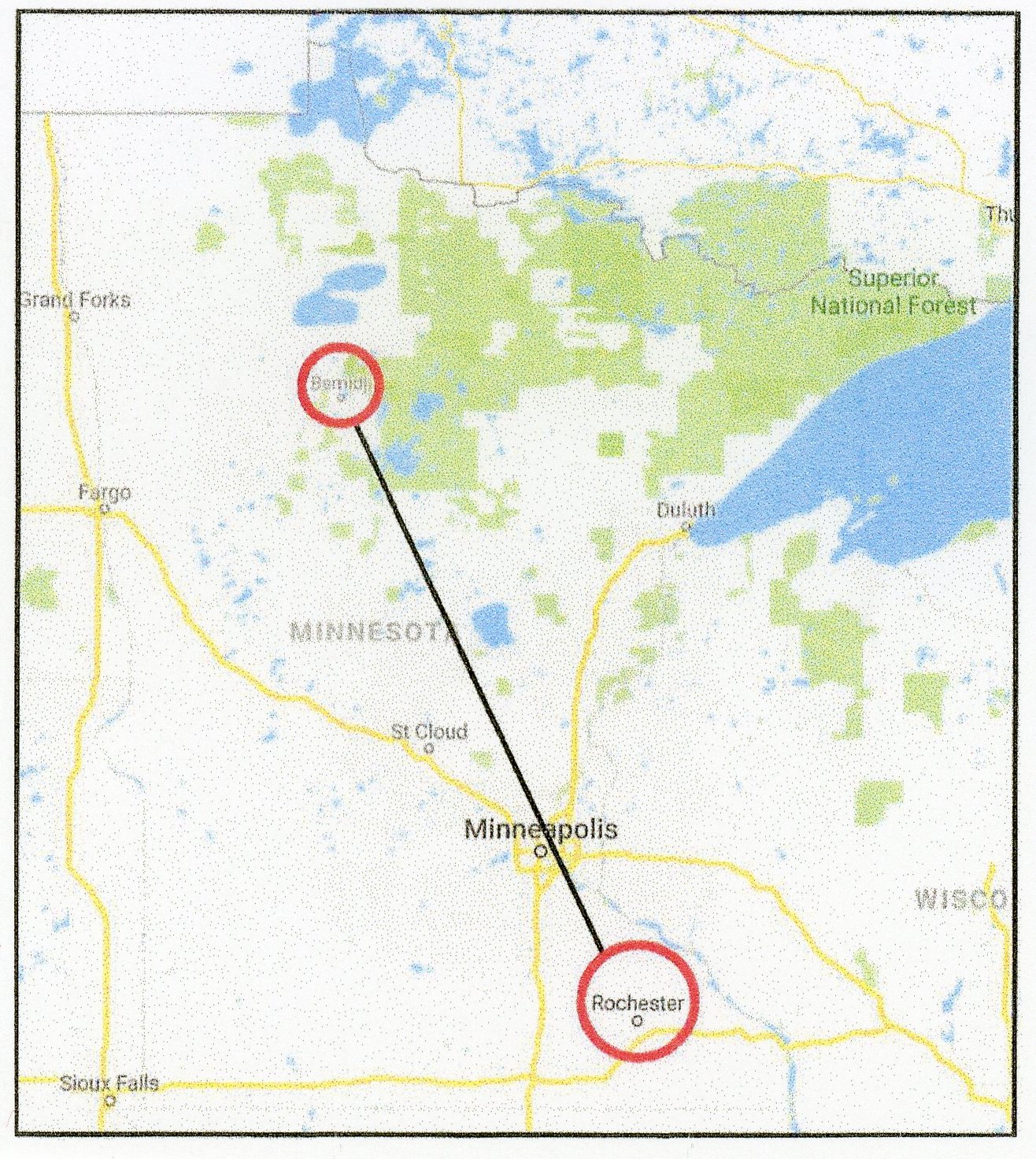 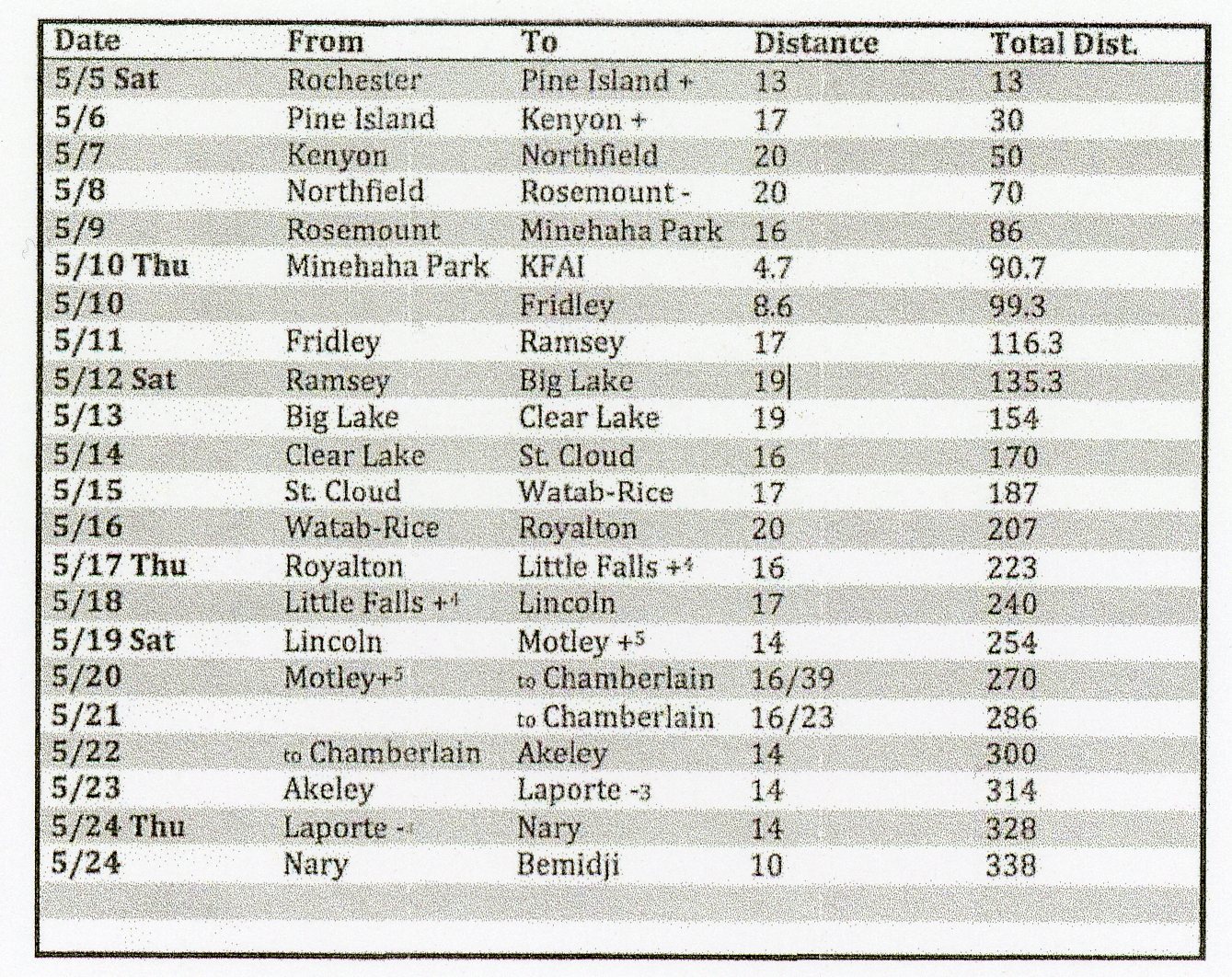 The Twin Cities “Leg”:  Wednesday May 9, the walk will leave Rosemount at 7 a.m. enroute to Minnehaha Park.

Thursday May 10, there will be a short program at Minnehaha Park beginning 9:30 a.m., then the walk goes up West River Road, ultimately arriving at KFAI for Don Olson’s broadcast at 1 p.m.  After the program, the walk will cross the UofM pedestrian bridge, and then walk up University Avenue to Fridley.

Friday May 11, the walk will be from Fridley to Ramsey.  Those wishing to do portions of the walk can possibly work out schedules with the Northstar Commuter rail which begins at the Target Field area.

It is nice to have a piece of positive news, as this reflective and honoring walk will be for Kyong Juhn.  Hopefully, I’ll be able to join a portion of the walk on Thursday.

But copying the map (above) caused me to think back to the time when I bought the Atlas, shortly after college and in the U.S. Army in 1962.  It was a major purchase at the time, and inconvenient too – Army infantry men, as I was, had almost no storage space, but it was a treasured possession, and still is.

What interested me, looking at the map, was that I had long harbored the impression that “China” (as in the big cities) was north of Korea.  I really had no reason to look closely at the map, which reveals, as you can see, a different reality.  So, it was a good learning to look at the old map.

I was a geography major in college (1958-61).   During my college years, Fidel Castro threw out Batista in Cuba;  Communism replaced Corruption.  In the Army I was one of those GIs who heard President Kennedy speak of the Cuban Missile Crisis in October, 1962.  “A History of Latin America” (1961 ed.) by Hubert Herring says this in the very last sentence of the long chapter on Cuba (p. 422): “Reflecting upon the sorry state of Cuba in 1960, the onlooker could say that two things are reasonably clear: Cuba was indeed overdue for a revolution, and revolutions are never mild and gentlemanly”.  (For anyone interested, I made a copy of this chapter on Cuba some years ago.  It is here: Cuba to 1963001)

Earlier, the Korean “War” (it has never been a declared war) had lurched to an end five years before I started college in 1958.  It was a deadly conflict.  I’m old enough to remember the fall from grace of Gen. Douglas McArthur, and it was in these times in the early 1950s that Sen. Joseph McCarthy and the House Unamerican Activities Committee were raging on about excising Communists among us.    It was a generally nasty time.

In a sense, both the Korean Peninsula and Cuba are residues of the “Cold War”.   Both have gone on for a very, very long time.  Any opportunity for even small positive changes should be welcome.  No need for any “victory lap” by anyone for anything positive that happens.

It is a welcome coincidence for Kyong Juhn that her long-planned walk to come at a time when the Korean Peninsula is more positively in the news.  But as anyone who has ever been in negotiations knows, it takes more than a meeting and words on paper to accomplish major objectives; in the end, the best result is that we not blow ourselves to bits, and that relationships are a tiny bit better and improve in small increments over time.  Don’t expect miracles.

from Andy: Regarding the piece on Cuba and sugar:  I cut sugar cane in Cuba for 6 weeks in the 1970 harvest when the economic policy was to maximize sugar production and reach the goal of 10 Million tons. The whole economy was mobilized around this goal. It was almost reached (8.5), but later, with sugar prices consistently so low, the policy was reversed.  I went to Cuba a few months and talked to an economist from the University of Havana.  He told me that now sugar is produced essentially only for domestic consumption. Tourism is now viewed as the most important sector of the economy.

from Larry: That was an excellent scan of the map of the Korean peninsula. Very interesting. I know so very little about this part of the world and, like you, this helped my understanding of the geography. I have a Fargo friend who was in Korea during the “police action” or whatever – he calls it a war and rightly so – and I will share your post and map with him. He, like so many of that era, is not a “computer guy.” He will certainly find your post of interest.