Videos of many of the speakers for Mar 6, 7, 8 can be accessed here. Day One, here. See also, Day Three, and March 9 and 10.
Over the years, I’ve developed a habit of not being concerned about the specific speaker(s) or program when I choose to attend an event. I just show up, and what happens, happens. I guess I like mysteries.
Very rarely am I disappointed. Mystery means, usually, opportunity, not risk.
Today, at the Nobel Peace Prize Forum in downtown Minneapolis, the program was a uniformly a great day.
All but one of the program speakers today were unfamiliar to me: I’d never heard of them, actually. Ahmet Ozumcu*, Courtney Rasch*, Muhammad Ashafa, James Wuye, Steve Pinker*. Last year I’d happened to attend a session at which Adama Dieng was speaker, otherwise I would not have heard of him either. (The presentations of those marked with * can be seen in their entirety here. The schedule includes some of Sundays programs, for your reference.)
The organisation of which Mr. Ozumcu is Director-General, the “Organization for the Prohibition of Chemical Weapons“, was awarded the Nobel Peace Prize in 2013.
Courtney Rasch witnessed and led us in a moment of silence for the large number of journalists who have been imprisoned and/or killed reporting from dangerous areas on dangerous topics.
As was true yesterday, the presenters – all of them, with their diversities – were phenomenal.
It was a phenomenal day. I left a little early, basically exhausted, but with a great sense of hope.
As I take time to learn, it is amazing to note the existing and high-quality and active infrastructure for peace and justice that exists everywhere in our imperfect world.
Those presenters on video (see link above) can speak for themselves. A few snapshots of the presenters are below.
A couple of notes on the programs not on video:
Adama Dieng, an immensely impressive gentleman, is Under-Secretary-General and Special Adviser of the Secretary-General of the United Nations on the Prevention of Genocide. When last I heard Mr. Dieng, a year ago, he talked about the legal aftermath of the Rwanda genocide in 1994. Today he mentioned he had left Rwanda just days before the 1994 Genocide began. At today’s presentation, he discussed the background of the tragic situation in the Central African Republic, which he described as basically religious-justified animosities (Christian v. Muslim). Mr. Dieng called special attention to a 43 page booklet published by his office, Framework of Analysis for Atrocity Crimes, which is publicly accessible at the link for his UN office (click on his name at the beginning of this paragraph).
I wish that the conversation involving Muhammad Ashafa and James Wuye, moderated by retired ELCA Lutheran Bishop Mark Hanson, was on-line, but it was apparently not scheduled for on-line presentation. The conversation was powerful, and light-hearted, and was interrupted by applause often by a most appreciative audience.
Immam Ashafa and Rev. Wuye are Nigerians from Kaduna, Nigeria. At an earlier time, in the early 90s, they were bitter, probably deadly, enemies. The Immam had lost a teacher and two relatives to Christians; The Reverend had lost much of his right arm to Moslems in one of those mini-religious based wars. The two were on opposite sides. Eventually, almost by accident, they met each other at a gathering, and in a few years time became close friends and now travel the world spreading a message of peacemaking.
It was obvious from how they were with each other that they are fast friends. Indeed, quite by accident, I observed them in the lobby before I knew who they were, and, there, they were very much at ease with each other.
In a way, both men reminded me a bit of South Africa’s Bishop Desmond Tutu: light-heartedly and effectively dealing with deadly serious problems.
But the most surprising and hope-filled presentation for me was that of Prof. Steven Pinker, author of “The Better Angels of Our Nature“. He gave an information packed powerpoint (watch the video) that demonstrated convincingly that, with all our problems, violence in global society is decreasing, and decreasing very markedly.
It was useful to see evidence that all is not going to hell…often in our world where negative publicity is about all that is press worthy, it is easy to believe the worst.
By no means does Pinker suggest that the world is a perfect place.
By no means, though, are things as bad as the “news” likes to portray, and we sometimes like to think, and we can have hope.
I leave this day more hopeful for the future.
POSTNOTE: I elected to attend the breakout session on Minnesota 2015: Global Summit on Democracy for Sustainable Future: Tools, Solutions and Best Practices, October 25-28. From all appearances, this will be a significant and positive event, and I’d urge individuals and organizations to follow, cooperate and indeed participate in developments.
Here is the schedule for March 7 (Saturday) and March 8 (Sunday): Peace Prize Forum Mar 7001. Sundays agenda seems focused on women and peace.
(click to enlarge) 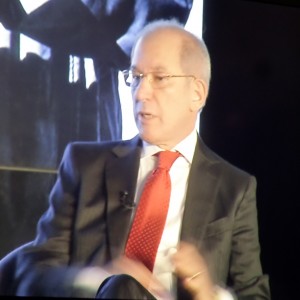 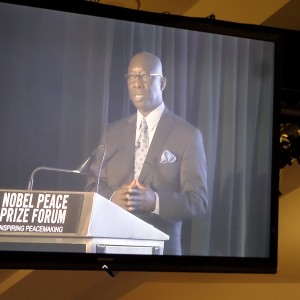 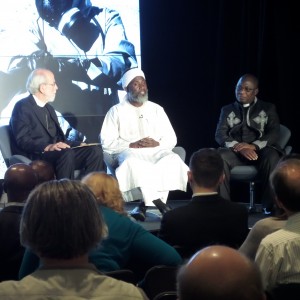 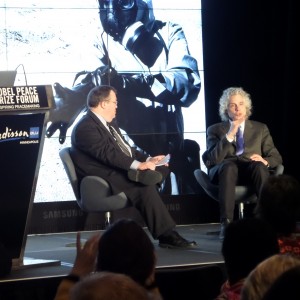 at right, Prof. Steven Pinker, author of “The Better Angels of Our Nature: Why Violence Has Declined”