Life takes it own course, and in our often too-frantic lives, we miss the gentle things that really make a difference.
So it happened, yesterday, that I had to leave, early, the funeral of a retired educator to attend to an equally important duty: taking 10-year old granddaughter, Addy, to the soon-to-end (Jan 8) Monarch Butterfly film and Exhibit at the Science Museum of Minnesota. (If you’re in the area, carve out the time for the program: it is well worth it….)
Marty Wicks, the retired educator whose life was celebrated yesterday, was a lifelong public educator. Her life is summarized here (4 pages): Marty Wicks001. She accomplished much.
I come from a family filled with public educators. That was also my background and career, and I think most in the education profession, including Marty, would agree that “lifelong educators”, especially in public education, early on realize that miracles can and do happen on their watch, but often these happen without their direct knowledge, and ofttimes many years later.
Marty’s brother-in-law, in a tribute to her, gave a personal example of how she, as his sister-in-law, was a powerful teacher to him, personally.
She made a positive difference, the best any of us can hope for.
Funeral over, and before the lunch, I had to make a rapid departure to pick up my granddaughter for our “date” with the butterflies at the Science Museum of Minnesota.
We had tickets for the 1:00 showing at the Omnimax, and like the rest of the packed house we sat transfixed as the remarkable story of Canadian researcher Dr. Fred Urquhart’s near lifelong quest to track the Monarch Butterfly migratory pattern came to life. Part of his incredible story can be read here.
Central to the story is Monarch PS397, tagged by some west suburban Minneapolis students in August, 1975, and remarkably discovered by Dr. Urquhart in Michoacan Mexico four months later, literally minutes after he began his first visit to the Monarch sanctuary, 2000 miles from where PS397 had begun its journey.
The two events: a funeral for an educator; and the central role educators played in one of the most remarkable stories of tracking a migration of an insect, thereby contributing to human knowledge, came together for me on Saturday afternoon.
Film over, Addy and I then went to the Butterfly Exhibit at the Science Museum where adults, kids and butterflies mingled happily in a summer-like environment (perhaps this doesn’t include the little tike whose nose became home base for a friendly butterfly, stopping by to visit!) It was warm in there: tip, if you go there, leave coats behind!
The Exhibit and the Film are at the end of their run here, but there are still a few days; and doubtless you can probably catch them somewhere else. Here’s the website for the film.
There is much more to be said, but more words from me are superfluous.
At the end of the day, I thought of a snapshot I took in November, 1999, North Dakota (below). It has always symbolized for me the entirety of relationships (the tree) and how individuals can shine like the sun, at a particular time for a particular person or persons. Like ourselves and the Butterflies, yesterday, we coexist together.
For certain, Marty Wicks “shone”, and lives on in many ways.
Addy, being ten, will likely have good memories from yesterday, but as kids are wont to do may well move on to other interests.
The important thing was the experience, the opportunity, to learn and to grow. We can all learn.
(click to enlarge.) 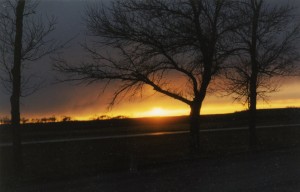