Today, November 2, 2014, is the 125th anniversary of the admission of the State of North Dakota to the United States of America.
I previously wrote about the history of this event, and the relation of my Grandparents Busch farm to that history on October 1. You can read that here, with numerous links.
The genesis for todays post came early Friday morning, in the hall between the North Dakota Nursing Home where my Uncle lives; and the Assisted Living facility where he lived until a year ago. I was walking down this hall and saw this photograph on the wall. I had seen it before, but this time it spoke to me in a new and deeper way. It was my Uncles farm, and he is the last of nine members of the family who called it home. I “borrowed” the photo and brought it home so I could scan it for posterity. The photo was taken, I learned, in the winter of 1992, hung in the hallway by someone I don’t know. Below is a marked version of it.
(click to enlarge) 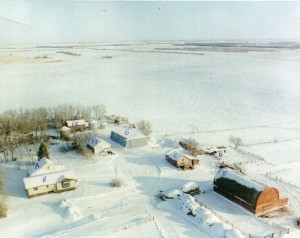 Every one of us have our own stories about places familiar to us. Recently I had occasion to revisit Eric Sevaried’s 1956 classic story in Colliers magazine: “You can go home again”, about the always real and imaginary relationship between place, our past and the present.
For Eric Sevaried, the place of his childhood was Velva ND. We lived in Karlsruhe, not far from Velva, in 1951-53, just three years before he came home again.
Memories.
Then there’s the Busch farm, above pictured:
Grandma and Grandpa Busch, Rosa Berning and Ferdinand Busch, ages 21 and 25, came to the little knoll, the farmstead for their little piece of heaven, as winter ended in 1905. North Dakota was bustling, not yet a teenager, 15 years old. Like a teen, it was growing fast, full of dreams and dilemmas, perhaps like todays western ND oil patch. The future was not yet known, the good times or the very bad, like the death of a child on the farm; or the Great Depression of the 1930s.
Theirs was virgin land, and the new house they soon built overlooked their surrounding acres. There was nary a tree in sight, in any direction.
To the northeast (upper right on the photo), about four miles distance down the hill in the James River Valley lay the older town of Grand Rapids. Within eyeshot, less than five miles to the southwest, was what would soon officially be the town of Berlin.
Grandpa’s Dad, my great-grandfather Wilhelm Busch, had purchased the farm for his son from the owner of the property, the father of later U.S. Senator Milton R. Young. Most likely they were steered to this land by Grandpa’s uncle, B. H. Busch of Dubuque, a budding successful land entrepreneur. They would be followed by other Buschs and Bernings, as Leonard, Lena, Christina, August. August and Christina Berning took up the neighboring farm to the SE about a year later, and farmed there for many years. Leonard and his wife came to Adrian for a few years; Lena married Art Parker, and before they returned to Dubuque, they were early caretakers at the Grand Rapids Park, the first residents of what we all know as the caretakers house.
The Busch house (marked “A” on the photo), initially was simply the standard two story prairie box. The kitchen was initially detached from the house on the west side; later added to the east side of the house; later an addition was built on the west side. In this house were born nine children; all but one lived to adulthood there. Rural telephone service came to this house in 1912, about the time Verena, the third child, was born in 1912. Ferdinand was right in the thick of things with Lakeview rural telephone from the beginning; Vincent did lots of work on rural telephone issues. Verena died of illness at 15, in 1927.
The Buschs, along with many others in the area, founded St. Johns Catholic Church in Berlin in 1915.
Vincent and Edith, brother and sister, never married, born 1925 and 1920 respectively, both lived on the farm until health issues led to a move to town in 2006.
Grandpa died in the old farm house, in 1967. Grandma was said to be the first person to die in what is now St. Rose Care Center in August, 1972. The torch was passed.
Another original building, which still survives at the farmstead, barely, is the granary labeled as “C” on the photo. The first barn was approximately at the letter “D”; another building, which I knew as the chicken coop, was later replaced by the metal shed labeled “G”. A new barn was built at “E” in 1916 for some unrecounted reason. In 1949, the roof blew off this barn and was replaced by the new hand-made roof, which the local Catholic Priest, Fr. Duda, himself an expert carpenter, declared wouldn’t last. That roof is what presently keeps the barn below it from collapsing. Early on, my Dad participated in the reconstruction; Uncle Vince did a huge amount of the work, including the shingling.
In 1957, Grandpa bought the old depot in Berlin and moved the freight house and the depot agents portion of the depot to the farm. They are F1 and F2 on the photo. F2 collapsed about 2006. F1 is at the end of its life.
In 1992, Vincent bought a new house, “B”, which they planted on what all of us descendants knew as the front lawn, a few feet from the old house, which remained there until we took it down in 2000. Most every gathering at the farm ended with a group picture on the same portion of lawn which is now occupied by the new house, presently being renovated.
There has been, now, 109 years of life on this farmstead, though at the moment no one lives on the property (soon to change). The farm is no more or less typical than any farm or town neighborhood anywhere. It is a place full of tradition and memory, especially for this grandson of the place.
There are endless memories in these few acres, as there are in every farmstead; in every block, in every town and city, everywhere.
There was Grandpa’s hired man, way back, who likely slept in the granary. One year, he didn’t come back, killed in WWI. George Busch was a naval officer in WWII; youngest brother Art, went in the Army at the end of the War; Vince stayed home to do the necessary farming. Music was a constant in the house, and probably elsewhere, all “homemade” music, sung and played by the inhabitants….

Busch farm harvest time 1907,. Rosa Busch holds her daughter Lucina, Others in photo include Ferd, behind the grain shock; Rosa’s sister, Lena, and Ferds father Wilhelm, and young brother William Busch. It is unknown who was unloading the grain in background. Possibly, it was Ferds brother, Leonard, who also farmed for a time in ND.