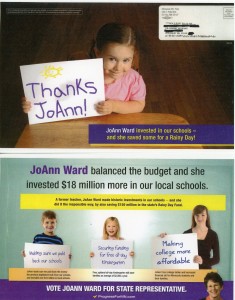 It happened that on almost the same day campaign mailers arrived in our St. Paul suburban mailbox advocating for the election of either the DFL (Democratic) or Republican candidate for state Legislature in our Minnesota legislative district. The JoAnn Ward (Incumbent and Democrat) mailer is above; that of her Republican challenger Lukas Czech is also on this page. Look carefully at both. There is an obvious and great contrast in both tone and content. (Click to enlarge both, which in original form were much larger in size.)
The two fliers give, in my opinion, a very accurate distinction between the Democrat and Tea Party (Republican) narrative at this moment in history.
There is a very major choice this November 4, as there is in every election.
Our personal electoral choices, including whether we choose to vote at all, have long term implications – at least for the next two years.
Last May, I had the great privilege of meeting and then working with a Fulbright/Humphrey Fellow through the Human Rights Center at the University of Minnesota Law School. Ehtasham, a civil official in a large city in Pakistan, was nearing the end of his year in the United States. Early on in our work relationship he mused about about the U.S. as perceived by his country, and his experience in our Twin Cities. His observation (as I recall it): “the people I have met here are good people; how is it that they support U.S. policies that are so dangerous to us in our parts of the world?”
This was the gist of what could have been a very long conversation, and came up more than once.
My succinct answer: we choose our leaders, and too often we make very bad choices, particularly by not thinking through the implications of who we’re voting for, or, as important, by our non-vote. Too often we are sloppy citizens
Last Saturday evening Michael Smerconish of CNN commented on a Pew Research survey that really helps to explain why the political conversation in America is so dominated by the far Right and far Left, and the results so unrepresentative of the U.S. community-at-large. You can watch his commentary here, and read the data here; especially note the first two graphics.
If you don’t vote, you lose. It is as simple as that.
In 2010 the very angry Tea Party Right Wing, who still dominates the political conversation as Republicans in Congress and in many state houses and legislatures, turned out to vote; great numbers of Democrats stayed home; and even more of what is called the Progressive Left either refused to vote at all, or voted for fringe candidates with no chance of winning anything, calling their action a vote for “principal”. 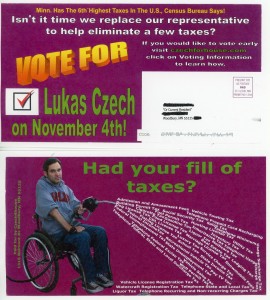