1. The Central American Children as Illegal Immigrants.
July 12, I filed a post on this topic: here.
As I clearly state in the post, I had very little information about the specific facts of the issue.
My basic note was that this is a complex situation, and I included an inset map showing how difficult it would be to simply get from Central America to the United States. 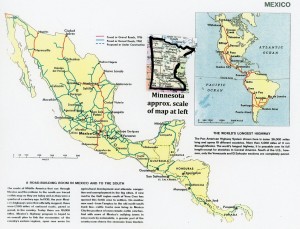 Adaptation of an old map to show relative scale of Central America to Minnesota. 1961 maps

So, where are we today, three weeks later?
The U.S. Congress delayed its five week recess by a single day to pass a bill on Friday which everyone knew would go nowhere, except into political campaigns. It was a total act of political theatre, taking no action on a crisis, preparing for the election in November. The Saturday Minneapolis Star Tribune carried a story on page four about the impasse. You can read “Congress exits after a display of dysfunction” here: Congress 2014001.
Way down towards the end of the article: “By traditional measurements the 113th Congress is now in a race to the bottom for the “do nothing” crown” [passing- “just 142 laws – 34 of them ceremonial…The original “do-nothing” Congress of 1947 and 1948 passed 906 laws.”
2. Israel/Gaza Strip and Ukraine.
July 26 I filed this post. The day I wrote the post, there was one Israeli casualty, later increasing to 13, with hundreds of deaths in Gaza.
About a week later, there is a catastrophe in Gaza, and the Israeli population by and large supports the Israeli government in this internal war.
Yesterdays Just Above Sunset gives a good rundown of the awful current situation there.
We think in shorthand about such places, if we think about them at all. Israel, a place I visited in 1996, is a state less than one-tenth the size of Minnesota, mostly desert, with about 8 million people (Minnesota population 5 million). Gaza is about a dozen miles square in size (it is rectangular), and has nearly two million people, growing very rapidly.
There seems some Israeli fantasy that an entire population of Gaza can be bombed into permanent submission; some even think it can be eliminated. History teaches over and over that it just doesn’t work that way. The saying goes: “What goes around, comes around.”
But…what do I know?
In Ukraine, things are more quiet. International experts are at the site of airplane disaster, picking up body parts and belongings of those killed.
Politically, things seem a bit quieter, and that is always good. It is easier to negotiate quietly than through news media.
It’s a nice day here. And a birthday party soon for a 15 year old.
Life is good.
But that depends on where one is, and on their own particular point of view.
Keep engaged.
POSTNOTE: here’s an uncomfortable commentary on Israel/Gaza.
https://thoughtstowardsabetterworld.org/wp-content/uploads/2022/04/thoughts-300x138-1.jpg 0 0 dickbernard https://thoughtstowardsabetterworld.org/wp-content/uploads/2022/04/thoughts-300x138-1.jpg dickbernard2014-08-03 15:57:542014-08-03 15:57:54#920 – Dick Bernard: Some brief comments on two items of "old" news.
2 replies