My summer has taken on something of a theme: most of my thinking, and a great deal of my time, has related to an old farm 310 miles away. My Aunt Edithe, born there in 1920, died in February; and her brother, my Uncle Vince, is in Nursing Home Care and no longer can even visit the farm on which he lived for over 81 of his 89 years.
It’s fallen to me to deal with the multitude of issues that relate to such a transition. This is not a complaint: it is simply a reality.
On the road there’s no computer for me (a deliberate choice), and usually no TV (too tired), and ordinarily no newspaper either (available, but otherwise preoccupied). So in a small sense I’m like that hermit I came across in the Tarryall section of the Rocky Mountains during Army maneuvers in 1962. He lived in an isolated log cabin, no electricity, no phone, and once a month he walked to the nearest town far off in the distance, to provision up. One of his provisions was the entire previous month issues of the Denver Post. Each day he would read one of the newspapers. So, he was always up to date, just 30 or so days behind.
(click to enlarge photo) 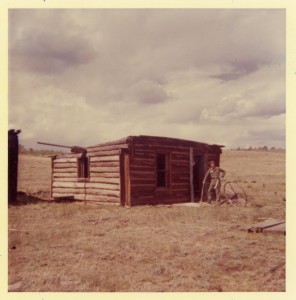 Hermit Shack at Tarryall Rocky Mountains Colorado June 1962. Dick B in photo. Visited with the hermit, but didn’t have the nerve to ask to take his photo.