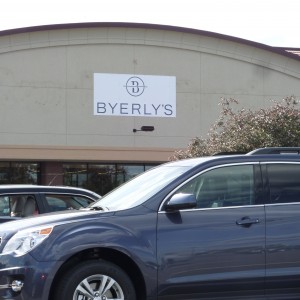 A couple of weeks ago I went to our nearby supermarket, Rainbow Foods, to pick up my daily staple: bananas.
This particular day, the store sported a new temporary sign, “Byerly’s”, indicating its new owner. We all knew this was coming: Byerly’s had bought Rainbow and change was coming to our supermarket. It was nothing rocket science: there is another Byerly’s a few miles away. But, still, it was a change. The average shopper might say Byerly’s is better. To me, they’re both generic “stores”.
Walking in, I asked a woman coming from the new Byerly’s: “do they still have bananas?”
She smiled.
Since that day, July 16, I’ve been rather intensely involved with preparing the farm home in North Dakota for potential new occupants.
It’s a very nostalgic time: the home place has been continuously occupied by my Mom’s family since 1905 (she was born there in 1909). Her brother, my Uncle, last in the line, the farmer who kept the place, and never married, is now in the local nursing home.
The re-purposing task has fallen to me, and with lots of help from family and neighbors the long vacant and now near empty farm house has yielded its trash and treasures.
Bananas are a relatively recent fixture on the family table in the U.S.; that rural farmhouse rarely saw them until very recent years.
But there was a big garden, and canned goods.
My sister started cleaning out the shelves of ancient home-canned this-or-that in the basement, and I hauled boxes of them out on Monday.
A jar of something canned by Aunt Edith with the old Pressure Cooker in 1997 (“97” on the lid) wouldn’t pass muster today, regardless of how well sealed. But that jar stayed in the shelves. Expiration dates had less meaning then.
Pressure Cooker? Here’s one, from the farm scrap pile…probably a perfectly good device, of no use, anymore. 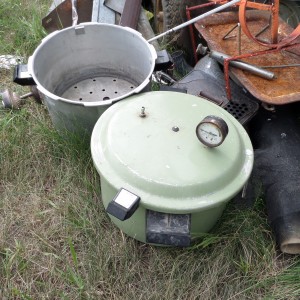 Pressure cookers at the farm (the back one sans lid.

To my knowledge nobody on the farm ever died or got severely ill from food poisoning, folk wisdom, perhaps luck. An iron constitution helped, too.
Back at Byerly’s, today, I was discovering the new store: the only distinction I can discern is that they moved the bananas, and other things. They are reorganizing the placement of the stuff I buy. I’m not sure where anything is. Whole aisles are empty; waiting for redesign. The same stuff I’ve always seen, just in a different place. Change.
At the farm, everything is there, somewhere, but never to be the same again. Change as well.
Down in the basement, Wednesday, sat a forlorn cardboard box with some stuff in it.
I’ve learned in such encounters that just tossing the box and contents is not necessarily wise. You never know what you might be throwing out.
Hidden in the box was the device pictured below (with coins added to give a sense of scale). 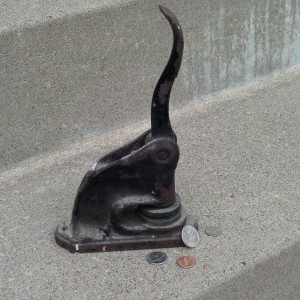 If you haven’t guessed, what’s pictured is an old official stamp made of heavy cast iron, built to last.
Being curious, I found an old brown paper bag to see if the stamp still worked and it did. 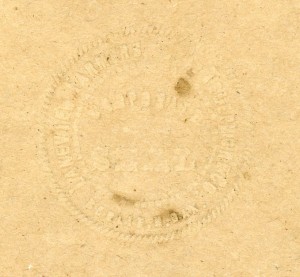 You are forgiven if you can’t read the writing. It says “Corporate Seal of the Lakeview Farmers Telephone Company Berlin N Dak”: the telephone company my Grandpa had a great deal to do with for many years in the really olden times of crank dials (“two longs and a short”) and party lines, where “rubber necking” was expected: there were no private conversations. In fact, Uncle Vince just the previous night had been remembering how hard it was to maintain those simple rural telephone lines.
Grandpa had probably used this stamp hundreds of times. Family history.
There were endless other bits of family history, now relegated to trash, or to treasure (the distinction only in the eyes of the beholder; you won’t see the stuff on Antiques Road Show or American Pickers).
Then home to Woodbury to recover.
Today I went back to Byerly’s (aka Rainbow), and once again got my bananas.
What I take for granted in that store was in days of old beyond my ancestors comprehension.
I wonder if, someday, what I take for granted will be an unspeakable luxury for generations yet to follow.
We do take things for granted.
It’s cause for reflection.