UPDATE July 16: Here’s how the Minneapolis Star Tribune reports on All Star Day in Minneapolis.
(click to enlarge) 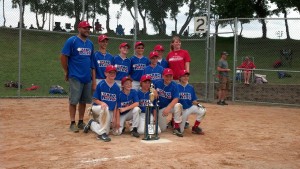 Tonight we experience the All-Star Game in the Twin Cities. About the only advantage we have, here, is that there is more “news” on the local media. A privileged few from all over the country will actually get into Target Field to actually see the game (it is an excellent venue, a short walk to downtown Minneapolis). I would suspect the game will be televised. It is hard to predict whether the game will be good or not…it’s a pickup game for ‘stars’.
No knot-hole gang type need look for reduced price admission today. There are no cheap seats.
Today’s Minneapolis Star Tribune had a good commentary on Baseball All-Star games here, past and present. You can read it here.
There have been three All Star games in the Twin Cities since Major League Baseball came to town in 1961: 1965, 1985 and 2014. (History here).
If our record is any indication, in recent history, an All-Star game follows by a few short years the construction of a new Stadium. So we have a long time to wait before the next extravaganza here. (The football Vikings get the Super Bowl in 2018, a reward for building a brand new Stadium now under construction, or so it would seem….) The “reward” for common people is mostly inconvenience.
I have always liked baseball, though I rarely go to games. Baseball is (in my opinion) a very civilized team sport where the reward goes to the team more so than to the star player.
A friend at the coffee shop, an avid golfer, said this morning that baseball is “boring”. To each his (or her) own, then.
Tonight I might watch part of the All Star spectacle, mostly commercials interrupted by occasional action on the field. In the advertising sense, the All-Star game is a minor league Super Bowl. The sport is secondary.
As for me, I’ll take the part of the baseball game I watched yesterday in Woodbury.
Grandkid Ryan, about to turn 15, is in a summer league of high school age kids who’ve not made the varsity cut, but are still interested in playing baseball.
Yesterday I managed to see a good part of their final game of the season, turned out to be for the league championship, and they won, 5-4.
In the group photo, below, Ryan is kneeling at right.
(click to enlarge) 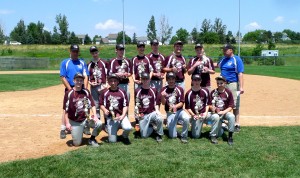 Except for Ryan, I don’t know the bios of the players. One of the kids, afterwards, was saying he’s beginning at the University of Minnesota in September. I know another kid, Ryan’s friend, was absent from this game due to illness. They all seemed to be decent, motivated, team-oriented kids.
This bunch started the season as average and ordinary (among their peers), but won their last five, then four straight in the playoffs, earning their trophies.
After the game, one of those old time sayings rattled around in my brain: “it’s not whether you win or lose, it’s how you play the game”.
It seemed to fit what I had just witnessed.
I decided to seek the quotation out on the internet. Best as I can determine the author was the famous sports-writer Grantland Rice, who had borrowed it from some ancient similar quotation, and first used it about 1927.
These days in our society, everything seems to be about winning. Period.
It’s nice to see some kids just playing the game.
POSTNOTE: There’s some proud parents going with the kids in the photo at the beginning of this post. These 12 year olds from KMS (Kerkhoven-Murdock-Sunburg MN) won a tourney at Chanhassen in late spring. They are a good working group, I’m told.
Teamwork is the essence of positive competition.
https://thoughtstowardsabetterworld.org/wp-content/uploads/2022/04/thoughts-300x138-1.jpg 0 0 dickbernard https://thoughtstowardsabetterworld.org/wp-content/uploads/2022/04/thoughts-300x138-1.jpg dickbernard2014-07-15 18:45:302014-07-15 18:45:30#912 – Dick Bernard: All-Star Baseball Game Day in Minneapolis
0 replies