“Outtakes” after the photos. Check back in two or three days for additions at that space, and comments.
Today is the Summer Solstice. On June 7, between meetings, I drove over to the Lock and Dam by Minneapolis’ Stone Arch Bridge, and a group of people were rehearsing a dance (see photo). Turned out, they were rehearsing for a free program this evening at the Stone Arch Bridge. Here’s details.
(click to enlarge) 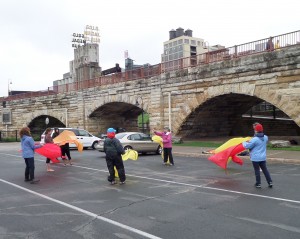 During 24 hours time period on June 19 and 20, I had the opportunity to both witness and participate in three activities about matters of Global War and Peace. My role was more than ordinary, standing in for Drs. Joe Schwartzberg and Gail Hughes at the Annual meeting of Citizens for Global Solutions, Minnesota, on June 19; and as one of the three panelists about the current Iraq-Syria crisis on Lydia Howell’s one hour Catalyst program on Minneapolis’ KFAI radio on Friday Morning, June 20.
Then, in the afternoon, I dropped by a Community Peace Celebration in the Frogtown neighborhood of St. Paul MN.
The entire radio program is accessible here. It was a stimulating and interesting hour, and the comments of myself, Sarah Martin of Women Against Military Madness, David Logsdon of Veterans for Peace and Lydia Howell speak for themselves. We covered a lot of ground in the one hour available. Of course, each of us left with assorted “soundbites” left unsaid (I’ll add some of these at the end of this post.)
(KFAI, to those not familiar, is a local radio station with a 35 years history which began as a 25-watt neighborhood station in the belfry of the old Walker Methodist Church in South Minneapolis. It is now live-streamed anywhere internet access is available. A look at its programming schedule reveals a most interesting selection not available on most “mainstream” stations. By near-happenstance, I was an on-air guest on KFAI program “Me and the Other” in October, 1982. This program continues as “Bonjour Minnesota” to this day.)
The radio program was about the beating of the war drums, yet again, by certain elements in the United States. As you will gather, if you listen to the conversation, there is difference of opinion about what all of this means. Even peaceniks (I am one, as were all of the others) have differing perspectives.
June 19, at the Citizens for Global Solutions meeting, I had the privilege of introducing colleague, Dr. Bharat Parekh, who took the Millenium Development Goals seriously, and after 9 years of effort is beginning to see significant success in a project to alleviate child malnutrition in, first, the Mumbai (Bombay) portion of his native India. 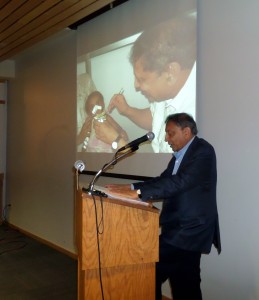 A summarized version of Dr. Parekh’s talk will be subject of a later blog at this space.
Succinctly, it takes lots of slogging along to achieve success, even small success, and Dr. Parekh’s determination is beginning to pay off. In my introduction I pointed out two quotations which begin and end the home page of AMillionCopies.info: “Never doubt that a small group of thoughtful, committed citizens can change the world Indeed it is the only thing that ever has.“ Margaret Mead. And, “We must be the change we wish to see in the world.“ Gandhi
Finally, Friday afternoon I dropped by at the beginning of the 18th Annual Community Peace Celebration gathering on the Grounds of Ober Community Center, in St. Paul’s Frogtown neighborhood. I was there early, and could stay only a short time, but already in evidence were the three Fs of a successful gathering: Food, Fun, Family. My friend, Melvin Giles, is one of the unsung community leaders who put on this successful event. This is yet another example of the truth of the Margaret Mead and Gandhi quotes recited above.
The final photos are all from the St. Paul event.
As Melvin always says: “May Peace Prevail on Earth”.
He and legions of others like him will get it done, one step at a time.
At the Peace Celebration June 20: 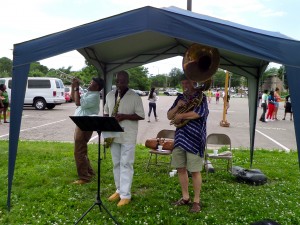 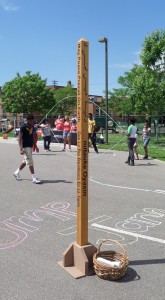 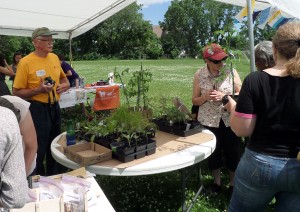 among the tables, some items for home gardens. 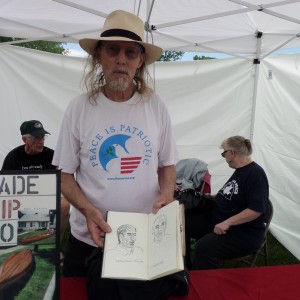 Peace Bell maker and artist at Veterans for Peace table 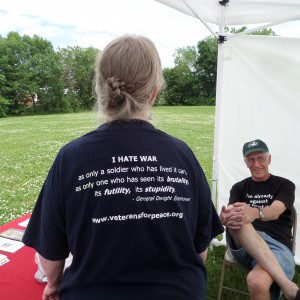 Message from Dwight Eisenhower on Peace

“OUTTAKES” from the Radio Hour:
Dick: Four of us had perhaps 40 minutes to share our thoughts. Here is one of my own, too complex to share in the brief time allotted. (The other panelists are asked for their opinion too.)
The current Iraq/Syria conflict seems to be a Religious Civil War, in some respects like our own Civil War 1861-65. I don’t recall ever reading that there was outside (i.e. English, et al) intervention on either side in that war. It was an internal matter to the United States of America.
Some statistics largely gleaned from the 2007 World Almanac and Book of Facts, and other sources.
I invite challenge on any of these numbers, as I am quoting from seemingly reasonable sources, but have inadequate context in some cases about what the numbers include, and thus what they mean.
The U.S. Civil War, 1861-65, including statistics for both “sides”:
31.4 Million Population of U.S. in 1860
2.2 Million Troops in the War
215 thousand Deaths in Battle
780 thousand total Casualties
544 thousand Maximum U.S. troops in Vietnam (1969)
Iraq et al 2003-2008
27 Million Population
200 thousand Iraq deaths in war
2.5 million American troops deployed to area conflicts
4.5 thousand American deaths in Iraq War
32.2 thousand American injured in Iraq War
from Jeff P, June 21: The deaths from usa civil war are over 500,000 , still debated by historians… the problem being that wounded or sick soldiers died, from lack of sanitary conditions.
https://thoughtstowardsabetterworld.org/wp-content/uploads/2022/04/thoughts-300x138-1.jpg 0 0 dickbernard https://thoughtstowardsabetterworld.org/wp-content/uploads/2022/04/thoughts-300x138-1.jpg dickbernard2014-06-21 11:36:242014-06-21 11:36:24#902 – Dick Bernard: The Summer Solstice, Reflecting on Global War and Peace.
0 replies