NOTE: There is plenty of “regular” news about the inauguration of the Minneapolis to St. Paul Green Line train Saturday and Sunday. Minneapolis Star Tribune, St. Paul Pioneer Press, and Twin Cities Daily Planet are three of, doubtless, many. 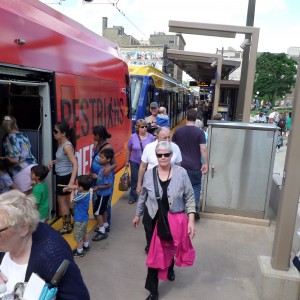 Some personal observations: a ride on the railroad
My spouse, Cathy, takes events like Father’s Day seriously. So, as Sunday loomed, she asked what I wanted to do for the day. I had only a single request: to join the throng that would doubtless pack the Green Line train on the opening, free, weekend. I even entertained the notion of trying to be on the first free ride early Saturday morning. That was a bit nuts, so we ended up going mid-afternoon on Sunday.
It wasn’t that I’ve never been on a train.
Occasionally we ride the Blue Line from Mall of America to Target Field via the Airport for a Minnesota Twins game. We begin the journey with plenty of seating; the return, after the game, begins with everyone packed like sardines.
The earliest train ride I remember was sometime in the late 1940s, 14 miles between Sykeston and Carrington ND, and back, in the single passenger car of the spur line which went from Carrington west to Turtle Lake in the morning, turned around and came back in the afternoon. Sykeston was the second stop. For some specific reason, on this particular day the route was reversed so that townspeople of Sykeston could “ride the rails” to small-but-larger Carrington and back, without staying overnight. There had to be some specific arrangement.
For a little kid, it was fun, including the occasional soot from the stack of the coal fired steam engine a few cars forward.
Once in awhile, rarely, there have been other train rides: as a college student from Valley City to Minneapolis about 1960 for a student union conference. That was an overnight ride, where the train seemed to stop in the middle of nowhere, frequently. Now and then there have been AMTRAK journeys, as St. Louis to Rochester NY; Washington D.C. to North Carolina; St. Paul to Hartford Ct via Rochester NY; Minneapolis to Chicago with my young son in the 1960s.
What are your memories of trains?
So, came Sunday afternoon, beginning at St. Paul’s Union Station. Initially the plan – my plan, as for a moment I “ruled the roost” – was to go the entire 11 miles and 20 stops from newly reopened Union Station to Target Field. I changed my mind. We went as far as the University of Minnesota stop, turned around and came back. The other stations we’ve seen before.
All of the route was familiar territory. It was just nice to see it from a train or, rather, experience it in a train. Westbound we were seated, and could see little; coming back we were standing, and could see little. It was a free day, after all, and train was full of people, including many friendly and polite families with young kids. This was an outing, not a trip to work!
Here’s two photos I took, one while seated; the second while standing. You can tell which is which! 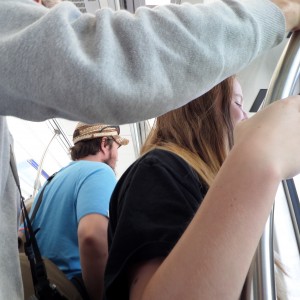 View from the seated position 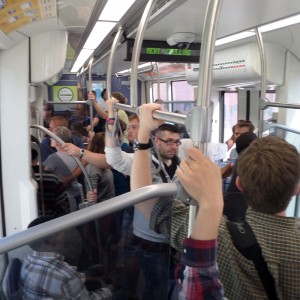 …and from the standing position.

Of course, there were a few grousers demonstrating. “STUPID” said one sign on Saturday; “Nobody will ride it” said another demonstrator. Waste of tax money….
Of course, it isn’t like the Green Line is something novel. Trains and subways and the like are ubiquitous, though not as ubiquitous as I’d like them to be.
As one nice person said while we waited at University Station for the ride back: “we drew preliminary plans for this route 25 years ago”. A news comment suggests that the idea was first surfaced 30 years before 2014. Long before that were streetcars.
It took so long because the “auto” interests prevailed. The monopolist who brought buses (big autos) to this area burned the streetcars so they wouldn’t be competition ever again. Later, I seem to recall, he went to prison for something or other.
But the Green Line was fun on Sunday, and when the hubbub settles down, it will be a busy line and enhance everyones quality of life. The grousers will grouse about something else.
Take it for a ride, sometime. I think you’ll enjoy it. 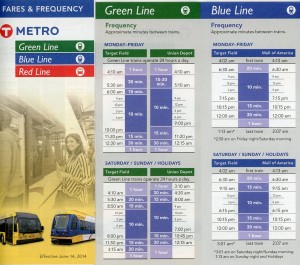