PRE-NOTE: Do you have any flag stories – things you remember? I’d like to hear from you.
*
Today is Flag Day in the United States. I’m a bit old-fashioned: a stand and doff-the-hat kind of guy when the American flag comes by. But I see a lot of misuse of the flag as a weapon, too, and I don’t like that.
Take a bit of time today to pay attention to flags you see. Rest assured, there are stories you will witness, if you simply pay attention.
The most notable flag which comes immediately to mind for me is the one I saw flying above Ft. McHenry in Baltimore harbor in late July 1999.
(click to enlarge photos) 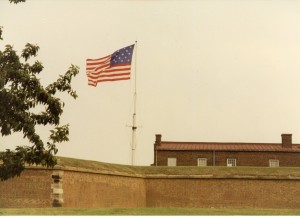 This is a replica of the famed Francis Scott Key flag which inspired the Star Spangled Banner.
Flags have a very long history, and usually they were, sadly, battle flags.
In June, 2003, we were taking a tour of the Palace in Copenhagen Denmark, and the tour guide pointed out that the Danish flag was one of the first prominent national flags. At the time, Denmark was a very powerful country, dominating the entrance to the Baltic Sea and thus dominating what we would now know as northern Europe.
Flags have been symbols of national pride, and, sadly, of national division.
Often, “God is on our side” is inserted into the flag, as is the case with the Danish flag.
Back in October, 2001, when the U.S. began to bomb Afghanistan in the wake of 9-11-01, I heard of a demonstration at the Minnesota State Capitol, and decided to go over to see what was going on. At the time, I was not a peace activist, but I was deeply concerned about how we as a nation were responding to 9-11.
The demonstration that night was a small one. I didn’t know anyone, and I don’t recall the specific speeches. To my knowledge, the demonstration was not recorded anywhere.
What I do remember, vividly, was a loud bunch across the street from the Capitol steps, brandishing American flags almost like weapons, and trying to drown out the protestors on the capitol steps.
Some images stick with a person.
Yesterday, I made a trip down to the Hennepin County Government Center (downtown Minneapolis) to revisit another flag which has become memorable to me.
It is a huge flag in the atrium of the tower. 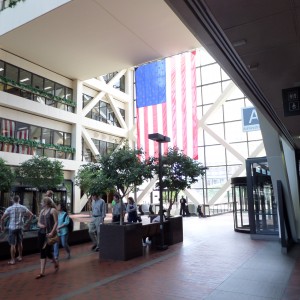 I rarely have any reason to visit the government center and first noticed this large flag April 12, 2013, while dealing with another flag issue, still ongoing and unresolved (and by no means forgotten by myself).
There was then, and still is, nothing visible to tell the history of this flag.
Back then, in April, 2013, I called Hennepin County and after being redirected three times, came across one person who thought they remembered why the large flag was hanging there: “I think it was put up sometime after 9-11-01. They thought they had to do something….”
I’m not sure that the description of the flag by the person was accurate, but I’m willing to bet that I know more about the history of that flag than nearly 100% of the people who see it, including the Hennepin County Commissioners with whom I’ve been doing battle about my own personal flag issue since I uncovered something untoward about another flag in December 2012…. (see link to March 27, 2013 below).
There is a U.S. Flag Code, which is advisory and has no force and effect of Law (freedom of speech), but which is nonetheless “enforced” in various ways by various people, all proclaiming that truth is on their side; “truth” usually being emotional and power based. My attention to Hennepin County relates to a flag which was taken down by the Hennepin County Board in March 2012, after a 44 year history of flying proudly next to the U.S. flag, having been raised there by all of the prominent politicians of 1968, Republican and Democrat, and community leaders.
The same board members who took the flag down, including one who is running for MN Governor as the endorsed candidate of his party, not only refuse to return the flag to its former status, but for over a year now refuse to answer easy questions about why they took it down in the first place. (The March 27, 2013 blog link gives the rest of that story, for anyone interested. And it is an interesting and distressing story.)
Yesterday, leaving the Government Center, I decided to see the presence of flags in the Plaza and the streets bordering said Government Center.
There were plenty of U.S. flags flying – six I recall. There were several Minnesota flags, and a couple of Hennepin County flags, and a flag of Canada (where the Canadian Consul General has his office).
The champion flag site around that block was the headquarters of a major bank which had six flag poles, including the U.S., State, and three Bank flags, plus a sixth one which I can only describe by the photo I took of it. I asked at the information desk inside the bank about the strange flag, and they didn’t know anything about it. Here it is. 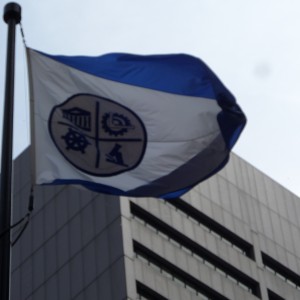 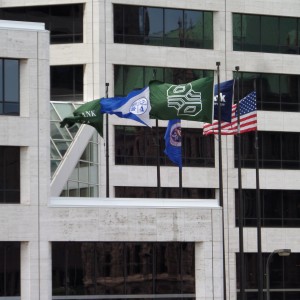 COMMENTS:
From David T: Your piece reminds me of the so-called “Hard Hat Riot” in 1970. There was a protest in New York City over the Kent State shootings. A group of construction workers, organized by the local AFL-CIO, staged a counter “Love It or Leave It” protest complete with a plethora of American flags. Things got ugly when the two groups converged on city hall. Shouting turned to pushing and shoving to fisticuffs. There’s an iconic photo of a beefy hard hat guy using a large flag pole as a weapon to assault an alleged “hippie.” The photo showed the generational polarization of the day.
Another photo that I recall from the same era shows a group of VietNam war protesters atop a monument in, I believe, Chicago, waving VietCong flags. I’m not sure what message the protesters intended to send with the flags but for many Americans, the message received was that these folks were anti-American. My own opinion was that they were simply naive.
It’s amazing to me what powerful symbols a piece of decorated cloth can become; symbols that can be embraced by groups for good or evil. A survey of KKK rally photos shows no shortage of American flags.
From Shirley L: My dad was always very “flag conscious” and insisted that we display it at all the various times of the year when flags were displayed. He was rigorous about teaching us the right way to display, fold, and store the flag.
In Lake Forest, IL where we live the American Legion is diligent about displaying flags on the local business streets – today they have put out 500 flags! So lovely! They will, of course, be taken down at sunset.
We moved recently to a delightful condo in the center of town – a huge downsizing for us and we are loving it. From our window on the third (and top) floor of the building we can see at least five U.S. flags flying daily! City Hall and banks are the primary locations.
So – Happy Flag Day to you! Thanks for the Flag Day article.
https://thoughtstowardsabetterworld.org/wp-content/uploads/2022/04/thoughts-300x138-1.jpg 0 0 dickbernard https://thoughtstowardsabetterworld.org/wp-content/uploads/2022/04/thoughts-300x138-1.jpg dickbernard2014-06-14 05:36:052014-06-14 05:36:05#898 – Dick Bernard: United States Flag Day June 14, 2014
0 replies