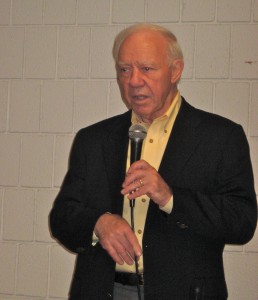 Those of us in Minnesota know that Jim Oberstar died May 3, 2014, and if we’re interested in politics, we know a lot about this veteran of the United States Congress from Minnesota 8th Congressional District who was defeated by a Tea Party upstart in the 2010 election, and then retired.
Here’s the biographical sketch of Mr. Oberstar, who served 18 terms in Congress, beginning 1975, and before that was an aide to long-time Cong. John Blatnik.
It is common to rail against “Washington”, as Mr. Oberstars opponent did, successfully, in 2010. The new representative served a single term in Congress, and was defeated in his reelection bid.
There is a great deal of good in “Washington”, and Jim Oberstar exemplified that positive quality, so missing in Congress these days.
I lived in Hibbing from 1983-1991, representing Minnesota Iron Range teachers, and I had infrequent but always positive occasions to meet with Cong. Oberstar. Oberstar was himself a “Ranger”, as fluent in French as he was in English; a recognized expert among his Congressional colleagues especially on Transportation issues. He was caught in the “throw the bums out” hysteria of 2010. He may have taken his reelection too much for granted, or maybe he was ready to retire anyway – he was already in his mid-70s.
May 21, 2011, just a few months after he was retired, I was privileged to be with a group of Democrats in the DFL Senior Caucus at our annual meeting.
Oberstar graciously accepted the invitation to speak to our group, and gave a powerful and persuasive defense of Social Security, a topic of real interest to us.
The photo at the beginning, and those below, are some photos I took at that meeting.
There were lots of good reasons why he shouldn’t be bothered coming to speak to our group, but no matter, he was there, and he was prepared as he would have been for any hearing in Washington.
We all have benefitted from the likes of Representative Oberstar. May the more positive tone of the past return….
(click on photos to enlarge)
All by Dick Bernard, May 21, 2011, Maplewood MN. 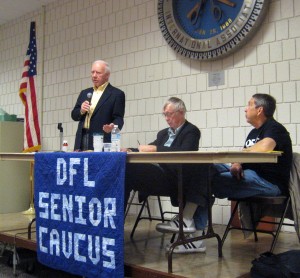 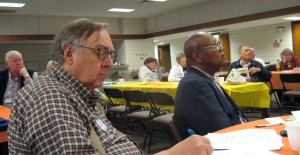 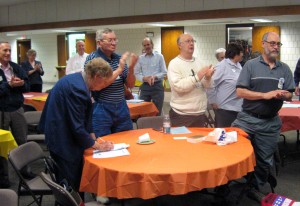