NOTE: See postnote about Hubert Humphrey at the end of this post.
Friday I decided to attend the Panel and Global Webinar “Living the Legacy of Hubert H. Humphrey” at the University of Minnesota Law School. The event celebrated the “35th Anniversary of Humphrey Fellowship Program..web-streamed for access by the other 15 Humphrey campuses and for Humphrey alumni around the world.” I expected an interesting program – previously I had attended the 25th anniversary in 2004 – but this years was particularly interesting.
The old history was recalled in a video by President Jimmy Carter (1977-81). The program was established in honor of Hubert Humphrey after his his death in 1978. In addition, Fridays program also recognized “the 50th Anniversary of the Civil Rights Act. Hubert H. Humphrey regarded the Act’s passage as a crowning achievement of his political career.” Seven of Humphreys family circle spoke as briefly as any Humphrey can speak (which is to say, 5 minutes means 10!) But everyone’s remarks were very interesting about their Dad, grandchild, uncle….
Two Humphrey alumni spoke (more a bit later).
Leading off the second panel was Bill Means, Lakota Elder and Board Member, International Indian Treaty Council.
(click on photos to enlarge) 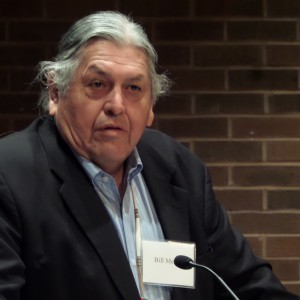 Mr. Means, a powerful Native American leader, had just come from the Minneapolis City Council, which had just voted to change Columbus Day to Indigenous Peoples Day in Minneapolis. It was, he said, the culmination of 50 years of effort.
I was always aware of the American Indian Movement, but never an active part of it, but I recalled a May, 1990, Pow Wow I’d attended in Minneapolis, and a page of the program booklet from that day which I published in a newsletter I edited in the summer of 1990. It speaks for itself: Heart of the Earth My 90001
I had taken quite a few photos that day, 24 years ago. Here are two. I believe the lady in the wheelchair is the legendary Meridel LeSueur. The event apparently recognized The American Indian Movements Heart of the Earth Survival School 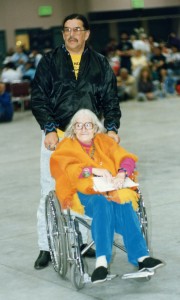 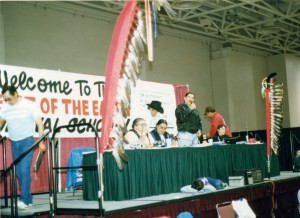 Speakers at Pow Wow May 26, 1990, Minneapolis MN. Is that Bill Means speaking? 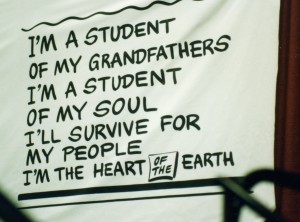 Mr. Means gave a short but powerful talk on April 25. He along with other powerful Native American leaders like Leonard Peltier, Dennis Banks, the Bellecourts and many others, brought attention to the native community ‘back in the day’ 50 or more years ago.
He said, I recall, that there are about 375,000,000 Indigenous Peoples in the world today. That would be about 5% of the worlds population, and more than the entire population of the United States.
Another speaker, Kaka Bag-ao, a Humphrey Fellow from 2006-07, powerfully talked about her post Humphrey career in the Philippines, including a powerful video of a 1700 kilometer (about 1000 miles) walk to Manila by many indigenous farmers successfully protesting seizure of their small farms for use as a golf course. At issue, it seemed, was 144 hectares of land – about 344 acres. The powerless got the attention of the powerful, but it wasn’t easy. Hopefully, I will be able to include the link to the video at this place soon.
Edmon Marukyan of Armenia (Fellow 2009-2010) had a similarly inspirational message to this and previous years Humphrey Fellows.
Among the many Humphrey family members, the one who impressed me the most was the youngest, Jordan Humphrey, Humphrey’s grandson. He was born a number of years after Humphrey died, and he’ll be a worthy representative of his grandfather.
It was a good day.
I’m glad I went. 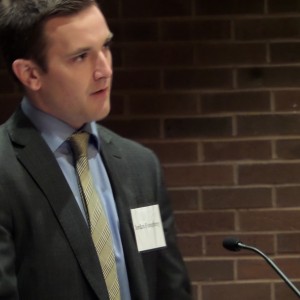